As reported yesterday, a new bright supernova was discovered in Messier 82, a famous irregular galaxy in Ursa Major. The exploding star was spotted during its rising stage and was found in several images since Jan 15, while “officially” discovered on 21 Jan. 2014.

Meanwhile, it received its official designation: SN 2014J and it is a type Ia supernova: that is an exploding white dwarf in a close binary system. With SN 1993J, in Messier 81 (a spiral galaxy making a remarkable pair with M 82), this is the closest supernova after the historic supernova 1987A in the Large Magellanic Cloud: it is at about 12 millions of light years from us.

The Virtual Telescope Project promptly provided optical and spectroscopic follow-up of the supernova candidate and our observations were included by the CBAT on CBET 3792.

Above is a nice animation, showing M 82 before and after the supernova explosion, with SN 2014J beautifully blinking: both images were collected with the the PlaneWave 17″ robotic unit.

Below is a very interesting spectrum, collected on 22 Jan. 2014 with the Celestron C14 robotic unit, equipped with a 100 lines/mm diffraction grating. The graph, plotted with RSpec, shows a prominent Si II absorption feature, sitting at about 6010 Angstroms. It shows this is a type Ia supernova. 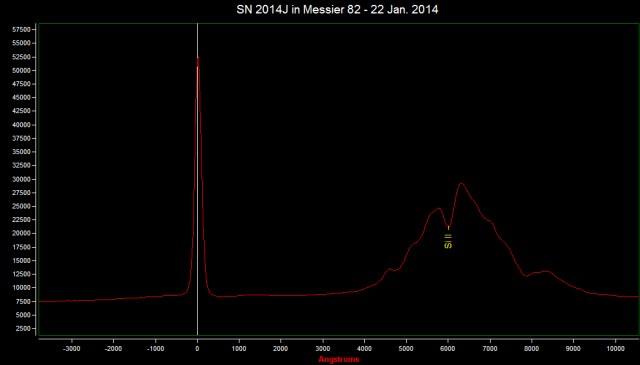