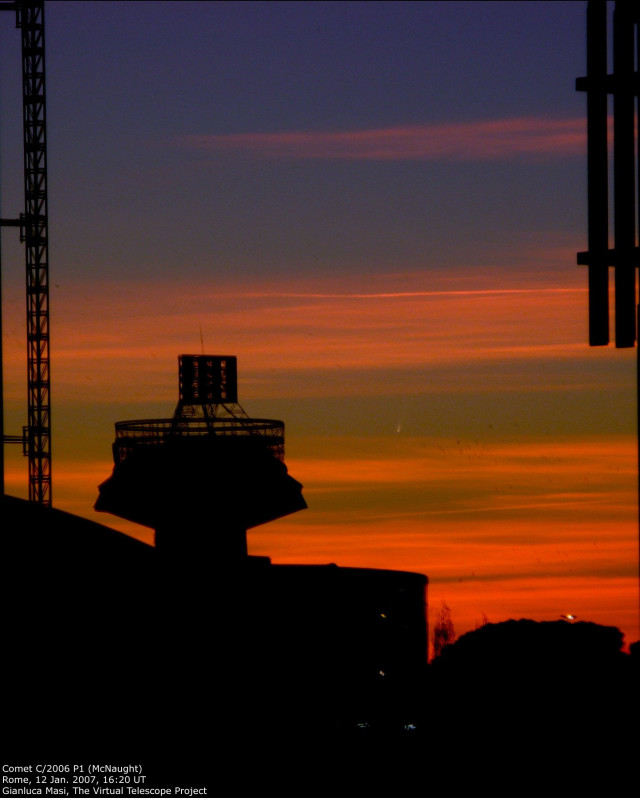 For sure comets are among the most impressive wonders of the natural world and when a bright one surfs the skies, there is nothing to do: everyone, everywhere, look for its light, admiring its elegant beauty and restless motion up there.

One of the brightest one of recent history was comet C/2006 P1 McNaught, discovered by Robert McNuaght on 7 Aug. 2006 from Australia. After a few months of visibility, the comet reached conjunction with the Sun, emerging at sunset with an increasing brightness to the point that it became visible in broad daylight. Peaking at mag. -5.5, it was brighter than any other comet seen from 1935, with the only exception of the famous Ikeya-Seki comet of 1965.

While the show was at its best for those living in the southern hemisphere (where the discoverer was, by the way), from the northern one the comet was easy to see in daylight, around its perihelion.

The image above was captured soon after the sunset and the comet is readily visible, despite clouds and haze were there. It was quite a sight, for sure an unforgettable experience, waiting for the next daylight comet. No special camera, just a point and shoot one: the comet was so bright the it did not need any further processing to show in the image.