Earlier this month, the Hilda-type asteroid (457175) 2008 GO98 showed evident cometary activity on images captured by  G. J. Leonard at Mt. Lemmon Survey.The following nights the extremely bright full Moon was a serious issue, making impossible for us to track the event. But we did some follow-up a couple of nights ago. 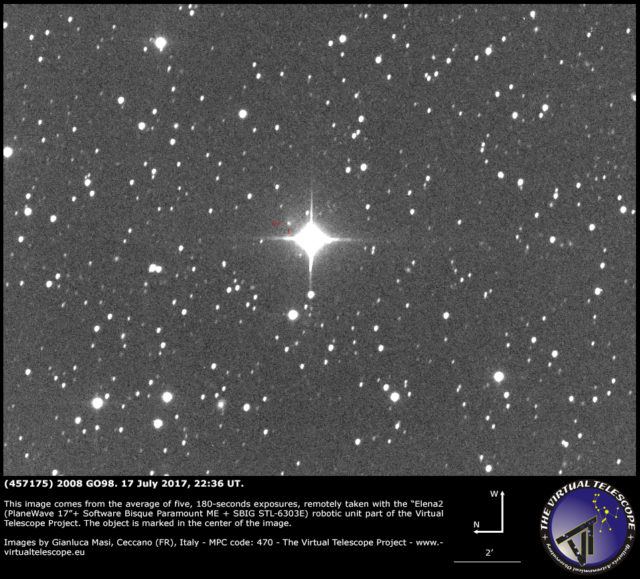 The image above is the average of five, 180-seconds exposures, remotely taken with “Elena” (PlaneWave 17″+Paramount ME+SBIG STL-6303E) robotic unit available at Virtual Telescope. The image scale is 1.2″/pixel.

The asteroid-comet (457175) 2008 GO98 is marked on the image with two red lines and it is clearly showing a coma, elongated in the E-S-E direction, despite the object is involved with the very bright star in the center of the field of view. At the imaging time, the target was about 40 high in the sky.

Objects of this kind are, very likely, dormant comets. This specific object was mentioned to be a quasi-Hilda comet candidate in a recent paper. (457175) 2008 GO98 reached its perihelion on Aug. 2016.

Of course, now that the Moon is no longer a problem, we will observe this object again, to cover its evolution.