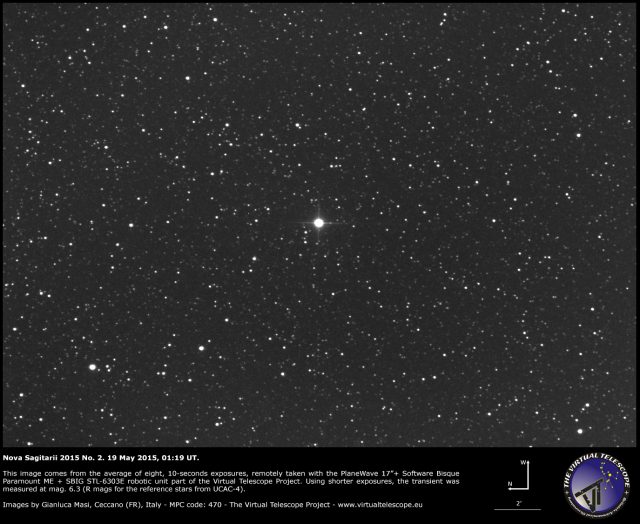 On 15 March 2015, J. Seach, Chatsworth Island, NSW, Australia, discovered a possible galactic nova in Sagittarius, temporarily named PNV J18365700-2855420. The nova nature was spectroscopically confirmed and the source was officially announced as Nova Sagittarii 2015 n.2. It turned out to be the brightest nova since 2013 (see V399 Del, aka Nova Delphini 2013).

Since it discovery it has shown a lot of variations and it looks like a so-called “slow nova” and it might peak in brigthness this summer, so it is worth to keep it under observation.

On May 19, we remotely used the Virtual Telescope to look at this object, despite its altitude was of less than 20 degrees (!). The image above comes from the average of eight, 10-seconds exposures, unfiltered, remotely collected with the  PlaneWave 17″+Paramount ME+SBIG STL-6303E robotic unit part of the Virtual Telescope Project. Using shorter exposures, the nova was estimated at mag. 6.3 (R mags for the reference stars from UCAC-4).

Back to “science” page