The 20 July 2016 Full Moon rises above the Colosseum 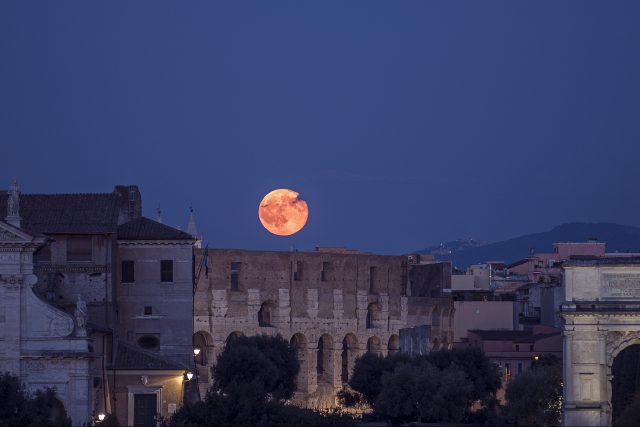 On 20 July 2016 the world celebrated the 47th anniversary of the Apollo 11, when the first men reached the Moon. That night the Moon was full, so I managed to grab it with our robotic telescopes.

Later the same day, I wanted to capture the Moon again, this time including something very special from Rome. I did some calculation to see if there was a chance to see the Full Moon rising above nothing less than the Colosseum. I had to find a place from where the Colosseum was showing WSW, the same direction of the rising Moon. It was not easy, but at the end I won. I located a spot over the Capitoline Hill very likely facing the right azimuth.

I reached the place bringing with me my cameras, my tripod and my 70-200 lens. I had a wonderful view above the Roman Forum, with the Colosseum on the background. I prepared everything soon after the sunset, making some final checks to be sure to be in the right place. People around were quite curious to see me so equipped and a few of them decided to have their cameras handy, too.

At some point, the Moon started to show and… it was exactly where I hoped! Our satellite had an extremely beautiful pale-red hue, contrasting with the blue sky all around it. A cloud was gently playing with it, too. You can see an image at the beginning of this post.

I must say it was so difficult to take photographs: the view was so precious that you wanted to look at it all the time. Meantime, the scene evolved with the twilight, while the Moon was higher and higher. The Moon was by itself a great sight, but the surrounding made the experience very unique. The Roman Forum at night is a breathtaking experience, give it a try, but add the Full Moon at twilight and it will blow your mind, definitely. 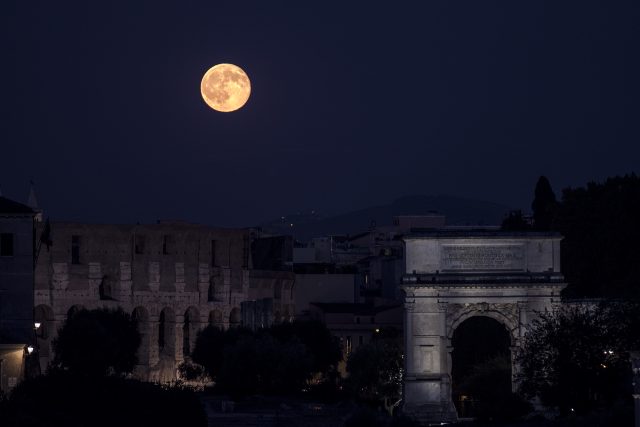 At some point, it was time to go. Well, it was hard to leave, but at least I had what I hoped. Meantime, several curious people gathered there, attracted by my setup, and I had to give a quick presentation about the Apollo 11 mission and the Moon. Before leaving, I had a last sight, with the sky now much darker and the Moon much brighter. I just had the time to capture another immortal fragment of beauty and left the place. 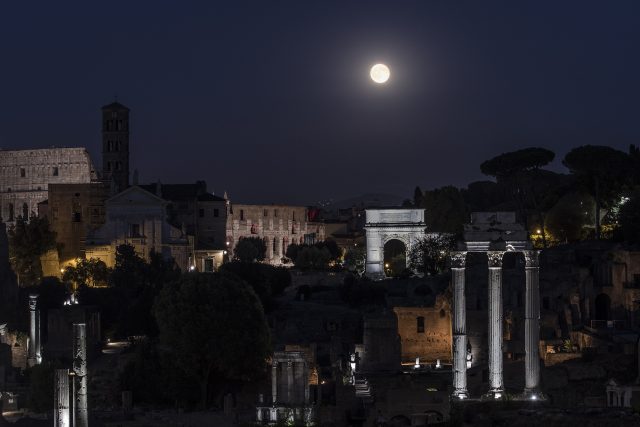 The beautiful Full Moon is shining above the Roman Forum

These experiences make you looking forward to the next chance, so I keep my camera and my imagination ready, as we will have more opportunities very soon.