In our tireless effort to bring to you the wonders of the sky and those of our planet, we are happy to share this new view, with the International Space Station (ISS) flying above one of the most precious archaeological areas of the world: the Roman Forum. 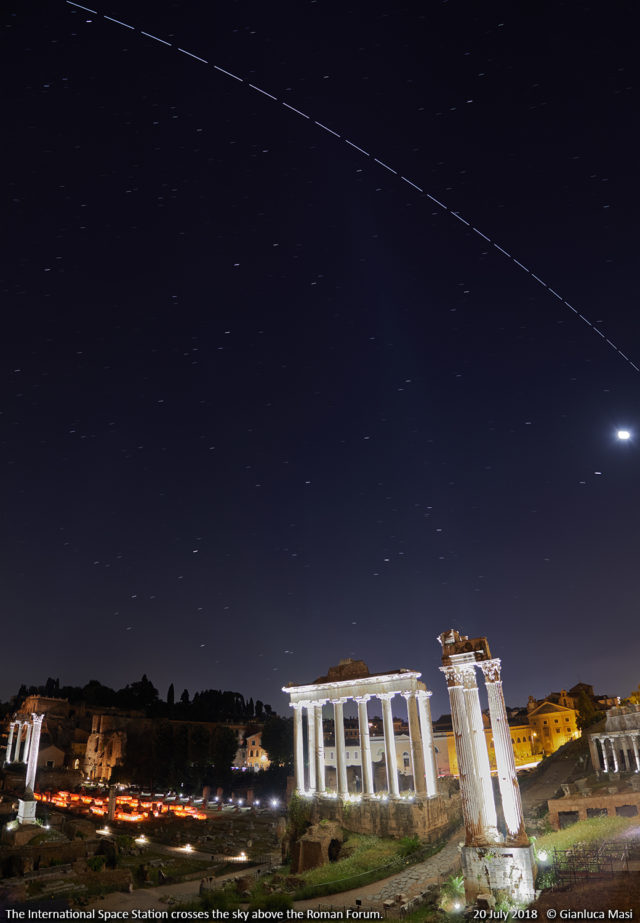 The International Space Station crosses the sky above the Temple of Saturn and the Temple of Vespasian and Titus, at the Roman Forum. – 20 July 2018

On the evening of July, 20th, 2018, the International Space Station was expected to make a very bright pass (apparent mag. -4.4, as bright as planet Venus!) above Rome, crossing the entire sky and peaking in luminosity almost overhead: surely a spectacular apparition!

Because of the high altitude reached in this pass by the ISS at its max brightness, it was not easy to image it at that very moment, including something interesting from the urban panorama of Rome and covering most of the transit: a very wide field lens was needed, as well as an interesting place offering a lot of clear sky above it.

As for the lens, I promptly selected my Canon 11-24-f/4 L, a great piece of optics, providing an extremely wide field of view, still working in a rectilinear way (different from a fish-eye lens, for example). Looking for a suitable location, though, was not straightforward.

I wanted something unique to be included in my image, but with the demanding constrains mentioned above I really had to think a lot, finally finding the solution: the Roman Forum, an area of immense cultural and historical value, as seen from the Capitoline Hill. I quickly checked the orientation of the area in my brain (this is where knowing positional astronomy makes a difference), deciding to go there.

30 minutes before of the ISS transit, I reached the place, carefully setting up everything in the darkness. Once done, I could admire the spectacular sight over the Roman Forum at night. I have been there countless times over the last 25 years or so, but the feelings are those of the early times.

A first-quarter Moon with planet Jupiter were going to be included in the image. A couple of minutes before the ISS made its entrance in my frame, I started taking a series of images back to back, to be used later to create a unique image: my preferred approach to these satellite passes.

Following the ISS during this majestic transit was amazing. Seeing it flying above such a venerable, legendary place was breath-taking and the satellite peaked in brightness very close to its absolute maximum.

The resulting image is visible above: you can see the ISS crossing most of the field of view, entering the scenery from the right and leaving from the upper left. Below, the wonders of the Eternal City, specifically the Roman Forum, dating more than 2500 years back.

As you can see, many stars are also visible all around, so I decided to draw the constellation lines, to show what is there. The annotated image is available below. Note: planet Saturn is shining just above the ~2500 years old Temple of Saturn! 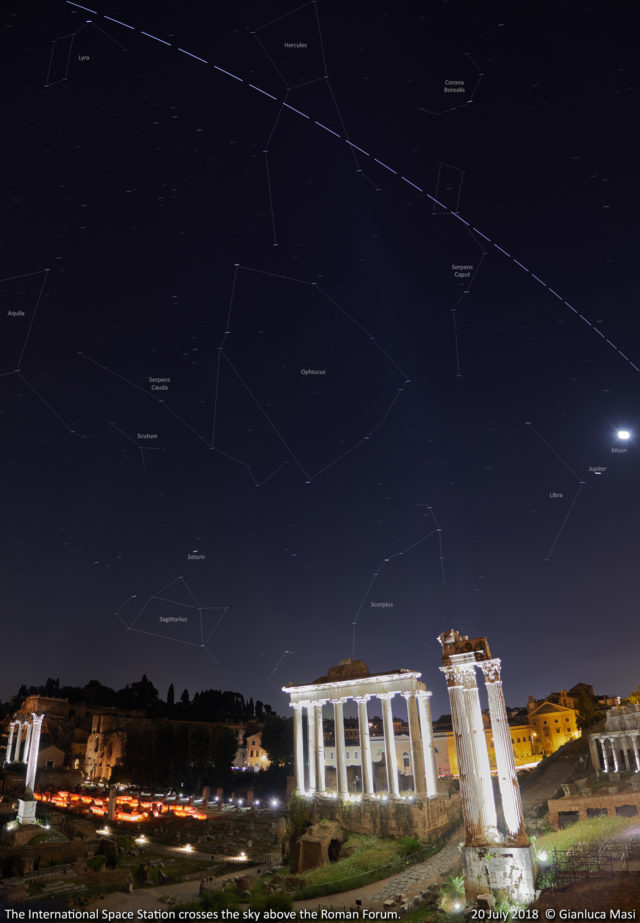 The ISS passes above the Roman Forum: annotated image – 20 July 2018

I’m looking forward to the next show and I’m ready to share it with you!