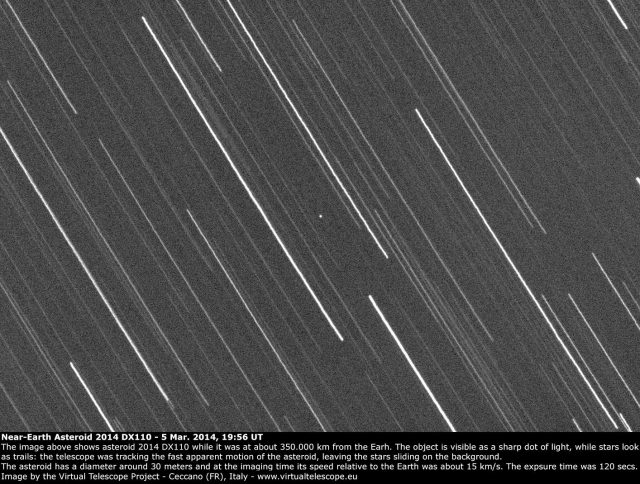 It is hard to comment the recent asteroid 2014 DX110 online event, after the unprecedented, huge success of our live coverage. Well, we are honestly used to a large participation, but this time numbers were… astronomical.

Since Sept. 2012, when we started this new, (hopefully) smarter website, we hosted many live feeds, sharing in real-time things happening out there, in the sky. But you know this, likely you were on-board, in our spaceship.

When we noticed that 2014 DX110 was just discovered, we immediately announced a live coverage of its close approach, provided it was going to be perfectly visible from Italy, at the time of minimum distance. The news of our event started traveling around the globe, thanks to many important websites and press agencies, becoming viral. 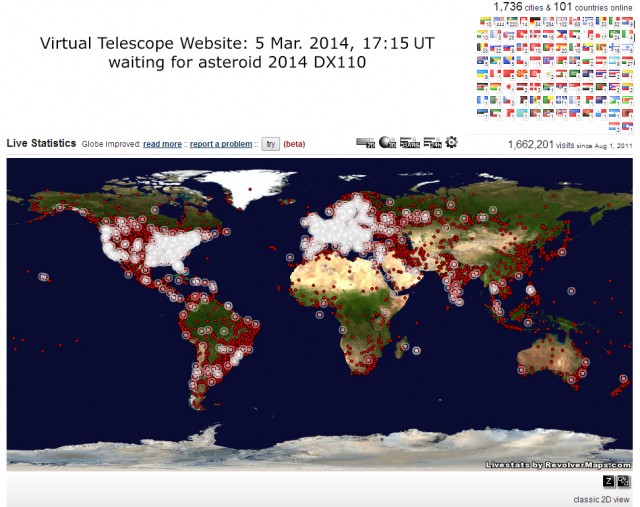 Soon, it was clear that a vast number of viewers was ready to jump into our website for the live feed and, at the scheduled time, that really happened. At some point, more than a few ten thousands of individuals were at the same time on our page and the server crashed! This happened a few times that evening, we apologize, but as you may know, that volume of visitors is critical for any server. While this was a problem, it was an happy problem, coming from a wide interest in the topic.

Just to give you some numbers, the day of the 2014 DX110 close approach (5 Mar.) we hosted a total of 281.869 viewers, willing to learn more and see that brushing rock; the following day, while the other asteroid 2014 EC was having an even closer approach, we recorded 141.630 individuals: a total of more than 420.000 curious visitors in two days. 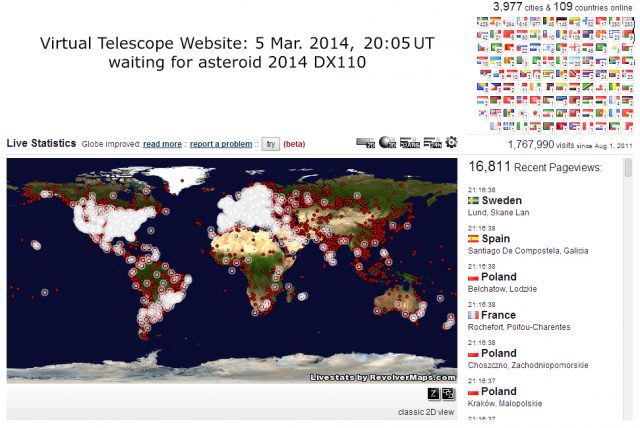 Clouds were a issue on both nights, but 2014 DX110 showed for ten minutes or so, making people happy!

While, as the end user, you just see a video playing, an image showing  the telescope console and live images from the imaging device, there is an amazing technology making this possible. Consider such a close approach as the one of 2014 DX110: the asteroid was moving with an apparent rate of about 500 arcseconds per minute, in 3 minutes almost covering the angular size of the full Moon. Furthermore, that rate was changing very rapidly, making things possibly much complex.

But our robotic system handled this very easily… and perfectly. The Paramount ME robotic mount made the difference, as it did in every case (you may remember the record event of asteroid 2012 DA14). But exceptional sentences need exceptional proofs, so look at the image at the beginning of this post.

The picture above shows asteroid 2014 DX110 perfectly tracked, while it was at about 350.000 km from us, closer than the Moon and moving at 500″/minute. The exposure time was of 2 minutes and in that time the stars left trails 0.3 degrees long (!). Let me say this: such a result and performance make us proud.

Above all, I wish to thank those who joined and, particularly, those who have sent a donation, supporting the otherwise unfunded Virtual Telescope: I apologize for the technical problems you might have had, but as I said the large number of participants was the (happy) reason for that. I also acknowledge our technological sponsors.

What’s next? Who knows, the sky will say!