Last 02 Nov. 2016, at 00:42 UT, the 15-meters large asteroid 2016 VA had an extremely close, but safe encounter with our planet, reaching a minimum distance from us of about 80.000 km. At Virtual Telescope we did an amazing coverage of its flyby, also capturing when the asteroid was eclipsed by the Earth’s umbra. Now, we present an exceptional image, grabbed while the asteroid was moving extremely fast in the sky, close to its minimum distance, setting a record for our facility. 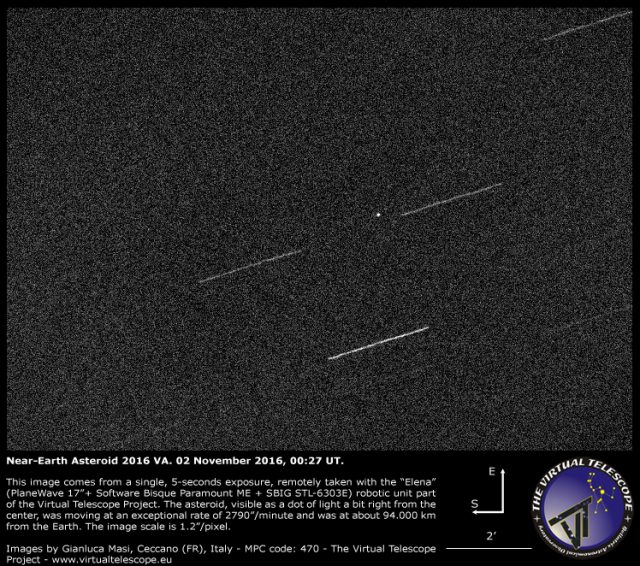 Near-Earth Asteroid 2016 VA was moving extremely fast when it was captured in this image. 2 Nov. 2016

After the eclipse by the Earth’s shadow, the asteroid continued to approach us and we followed it as long as possible, until it was very low above the horizon. While coming closer, its apparent motion increased a lot and we have set a record here: this was the fastest asteroid ever imaged via the Virtual Telescope Project.

Our old friends might remember another special, epic asteroid: (367943) Duende = 2012 DA14. On 15 Feb 2013, it made a record close flyby and we showed it live. When we captured it, it was apparently moving in the sky at the amazing rate of 2450 arc-seconds per minute: in 1.46 minutes it moved of one degree in the sky, twice the angular size of the lunar disk. Tracking it was an epic effort!

With asteroid 2016 VA we did much more. Considering our last images, before it was too low to be lost, we had to work at higher tracking rates.

The image above is a 5-seconds exposure, remotely taken with “Elena” (PlaneWave 17″+Paramount ME+SBIG STL-6303E) robotic unit available at Virtual Telescope. At the imaging time, the telescope was tracking with an exceptional rate of 2750 arc-seconds per minute: in 1.3 minutes it moved of one degree in the sky, twice the angular size of the Moon. Asteroid 2016 VA is the sharp dot a bit right from the center. To get these impressive results, the Paramount  ME robotic mount tracked using the ephemerides retrieved via the JPL’s Horizon webserver. At the imaging time, asteroid 2016 VA was at about 94.000 km from us, one forth of the average Moon distance.

This is an historic image and it is an exceptional result obtained during the 10th year of activity of the Virtual Telescope Project.