Earlier this month astronomers reported that stars in KIC 9832227, a contact binary system, are going to collide in a few years, with a resulting, huge visible effect, making it a bright object in the sky. Predictions say this will happen in 2022: meantime, we can see and study the couple even with small scopes. 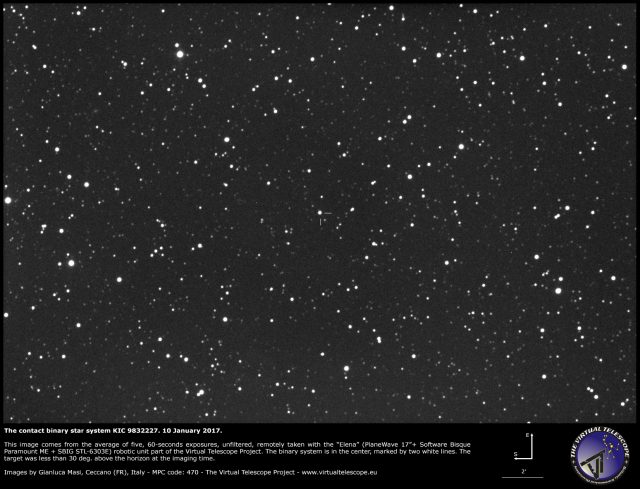 Update, 10 Oct. 2018: it has been noted that the original study leading to this prediction was based on wrongly timed data, so no merging will happen. We keep the post below for archival purposes.

This amazing news was shared by Lawrence Molnar and colleagues during the 229th Meeting of the American Astronomical Society and made the astronomical community looking forward to 2022, when the two components of this contact binary system should merge, releasing such an amount of energy making the event visible as a bright star in our sky, becoming a so-called “red nova“.

KIC 9832227 is contact binary system, consisting in two very close stars, sharing the same gas envelope. Molnar and his team started studying this system in 2013, when it was unclear if it was a single pulsating star or an eclipsing binary. Its nature as a variable object was found in 2004, as part of the Northern Sky Variability Survey (NSVS). Initially, it was thought this object could be a RR Lyrae star, though there was room for other interpretations, also thanks to the data coming from the Kepler space telescope. Finally, observations provided evidence it was indeed a contact binary system.

The available data say these kissing stars are orbiting each other every 11 hours, “hiding” each other to our eyes on the Earth every half of that time, with a resulting drop of brightness of about 0.15 magnitudes. 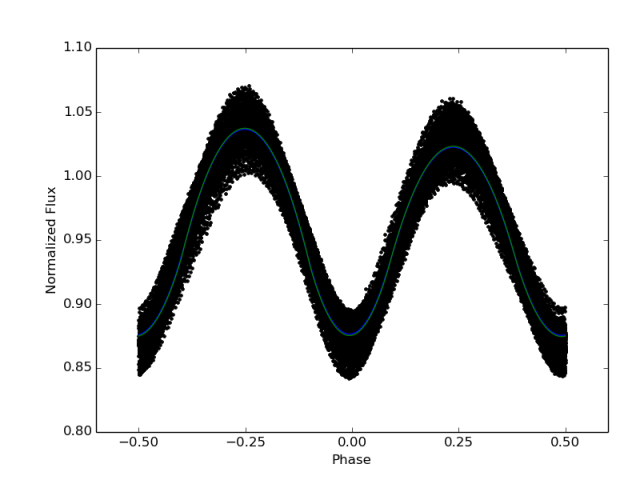 KIC 9832227: light curve from Kepler data. The spread of the data around the fitting curve is real.

Scientists involved in this study noticed that the speed of the orbiting stars was getting faster, meaning they were slowly approaching each other. They also suppose there is a third component, which possibly helped the two other stars to come that close, actually in contact.

Assuming all the available data, Molnar and colleagues predicted that the two stars will merge in 2022 +/- seven months.

This scenario was suggested by an event happened in 2008 and involving the star V1309 Scorpii. It showed an unexpected flare, later interpreted as the likely merging of two stars part of a contact binary system.

As a consequence of this kind of collision, the brightness of the system can increase of an order of magnitude of 10,000: considering KIC 9832227 is shining now around magnitude 12, at the outburst peak we could expect an object quite bright out there, easy to see by naked eye, even from light polluted cities.

Of course, at this point we are all hoping this prediction will turn to reality. We will live and see. It is not easy to imagine when the brightness of the system will start to increase, up to its climax. What we know is that this source is placed pretty well for us living in the Northern hemisphere, among the stars of Cygnus, the “Swan”, at about 1800 light years from us. 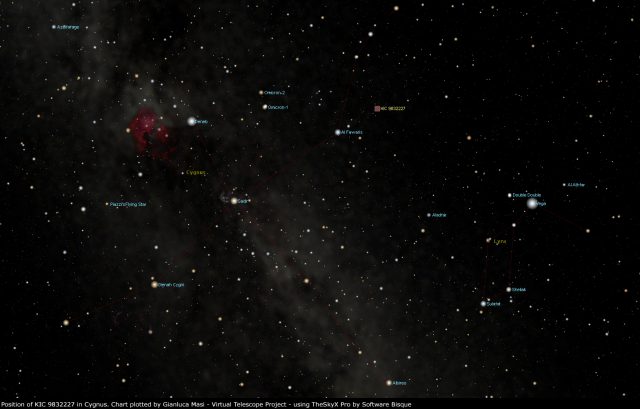 While waiting for the moment of truth, at Virtual Telescope we plan to cover KIC 9832227 during its future apparitions, to contribute to the refinements of the collision hypothesis and timing.