In 2016, asteroid (17473) Freddiemercury has been officially named after Freddie Mercury, the lead vocalist and co-principal songwriter of the epic rock band Queen. We imaged it a few weeks later and now we captured this asteroid again. 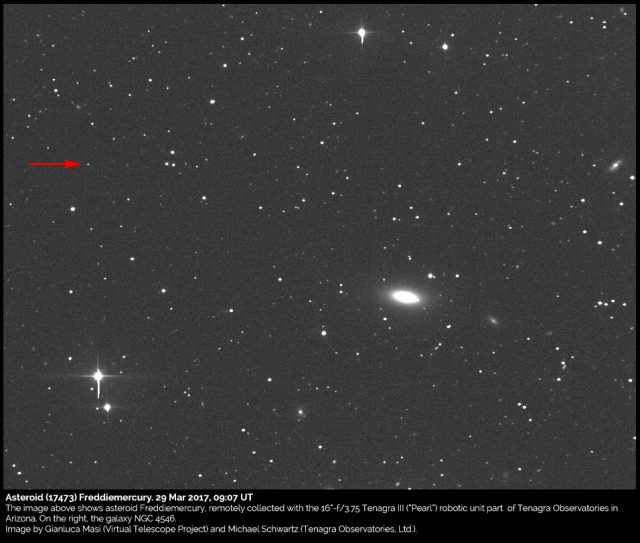 The image above was remotely taken with the 16″-f/3.75 Tenagra III (“Pearl”) robotic unit part of Tenagra Observatories in Arizona. The telescope tracked the apparent motion of the comet. The imaging camera is based on the KAF-16801 CCD. The resulting image scale is 2.4″/pixel. Further details are available on the image itself. The median combination limits the contamination of the stars, making the tail easier to see. Its length is more than one degree.

Below is a video where Brian May (founder and guitarist of the epic rock band Queen, also PhD in Astrophysicist and co-founder of Asteroid Day),  announces asteroid Freddiemercury, last 5 Sept. 2016, on the occasion of the 70th birthday of Freddie.