We observed comet C/2017 E4 Lovejoy again, after we observed it developed a nice ion tail, which is still a prominent feature, despite the comet’s low solar elongation. 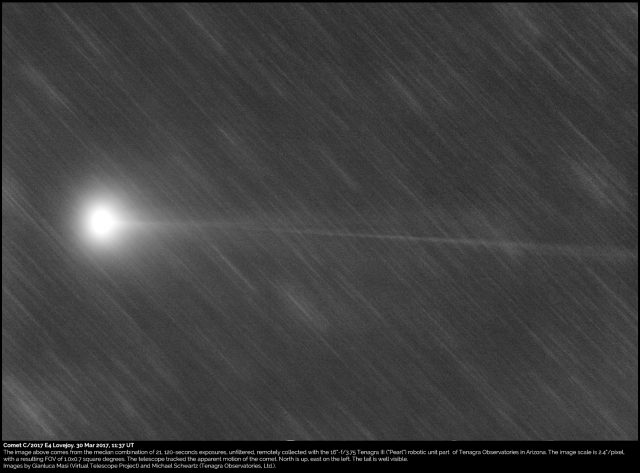 The image above comes from the median combination of 21, 120-seconds exposures, unfiltered, remotely taken with the 16″-f/3.75 Tenagra III (“Pearl”) robotic unit part of Tenagra Observatories in Arizona. The telescope tracked the apparent motion of the comet. The imaging camera is based on the KAF-16801 CCD. The resulting image scale is 2.4″/pixel. Further details are available on the image itself. The ion tail we imaged yesterday is still well visible, spanning for more than one degree.

The movie above uses all the single 21, 120-seconds exposures, to show how the ion tail evolved in about 45 minutes.