Comet C/2015 V2 Johnson is still showing nicely in the sky, and we visited it again, while other comets are all around. We do not want to forget this beautiful icy world. 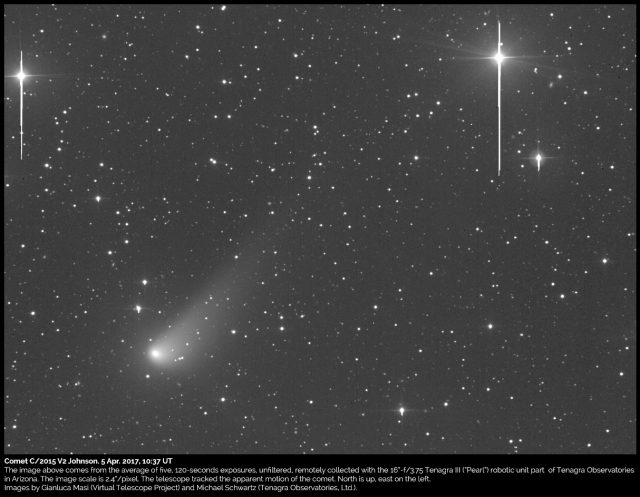 The image above comes from the average of five, 120-seconds exposures, unfiltered, remotely taken with the 16″-f/3.75 Tenagra III (“Pearl”) robotic unit part of Tenagra Observatories in Arizona. The telescope tracked the apparent motion of the comet. The imaging camera is based on the KAF-16801 CCD. The resulting image scale is 2.4″/pixel. Further details are available on the image itself. North is up, east on the left. Its perihelion will be reached on 12 June 2017. As we can see, it is quite bright and it would be for sure a primary target for every observer, if other bright comets, like C/2017 E4 and C/2015 ER61 were not in a very bright state, both with an amazing ion tail.