After its outburst announced a few days ago, we were able to image comet C/2015 ER61 Panstarrs, capturing its amazing tail,  even if some clouds made life not easy. 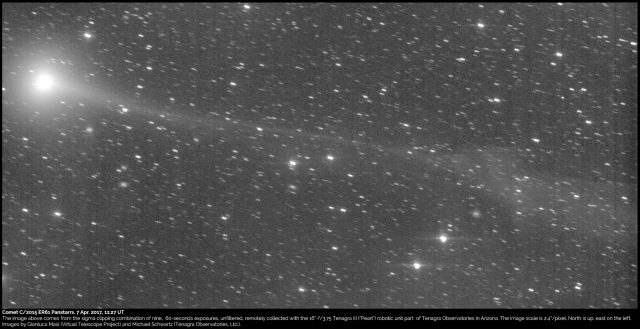 The image above comes from the sigma clipping combination of nine, 60-seconds exposures, unfiltered, remotely taken with the 16″-f/3.75 Tenagra III (“Pearl”) robotic unit part of Tenagra Observatories in Arizona. The telescope tracked the apparent motion of the comet. The imaging camera is based on the KAF-16801 CCD. The resulting image scale is 2.4″/pixel. The tail reveals huge features, making this comet a true gem.  Some clouds affected the imaging session, but at least we could grab something worth of the effort.