While waiting for its safe close encounter next 19 Apr., we imaged the potentially hazardous asteroid 2014 JO25, while it was still relatively faint and low above the horizon. 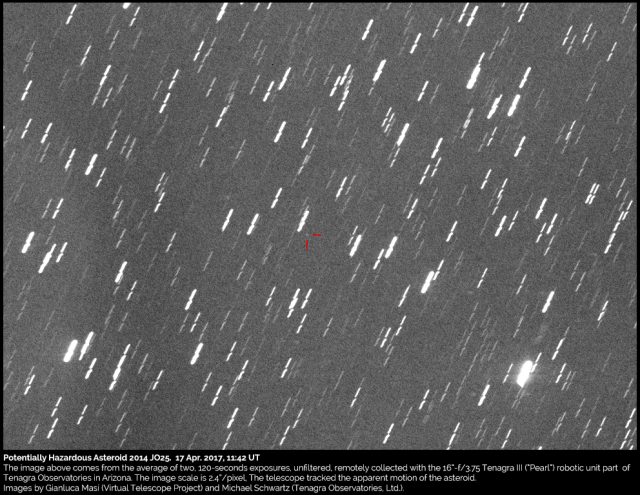 The image above comes from the average of two, 120-seconds exposures, unfiltered, remotely taken with the 16″-f/3.75 Tenagra III (“Pearl”) robotic unit part of Tenagra Observatories in Arizona. The telescope tracked the apparent motion of the asteroid, which is marked with two red lines in the center. The imaging camera is based on the KAF-16801 CCD, used in 2×2 binning. The resulting image scale is 2.4″/pixel. At the imaging time, the object was only 19 deg above the Eastern horizon.

We reported the position of the asteroid to the Minor Planet Center (observatory code: 926) and, to our knowledge, we were the first to image and measure this asteroid after its solar conjunction.

*** The Virtual Telescope will show asteroid 2014 JO25 live, online, for free. Check it out here.