While observing conditions are, day after day, more difficult because of its small solar elongation, we continue to observe comet C/2017 E4 Lovejoy while its fades, after its nucleus disintegrated. 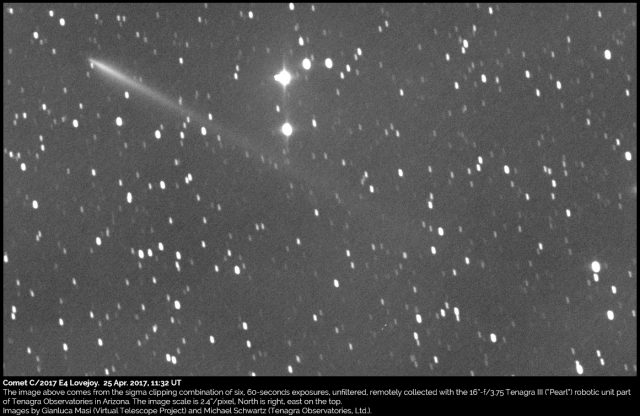 The image above comes from the average of six, 60-seconds exposures, unfiltered, remotely taken with the 16″-f/3.75 Tenagra III (“Pearl”) robotic unit part of Tenagra Observatories in Arizona. The telescope tracked the apparent motion of the comet. The imaging camera is based on the KAF-16801 CCD, used in 2×2 binning. The resulting image scale is 2.4″/pixel. The comet was VERY low above the NE horizon, less than 6 degrees, after the beginning of the morning twilight.

Likely, this is one of the most extreme images we could take and shows how exceptional the sky conditions are at the observing site, to grab such a pale object so low in the sky, at the morning twilight.

So far, we obtained an outstanding coverage of this comet, as our image collection easily shows.