Omega Centauri (NGC 5139), the most impressive globular cluster up there, turning pale the even memorable Messier 13, shows here all of its spectacular and thrilling beauty. 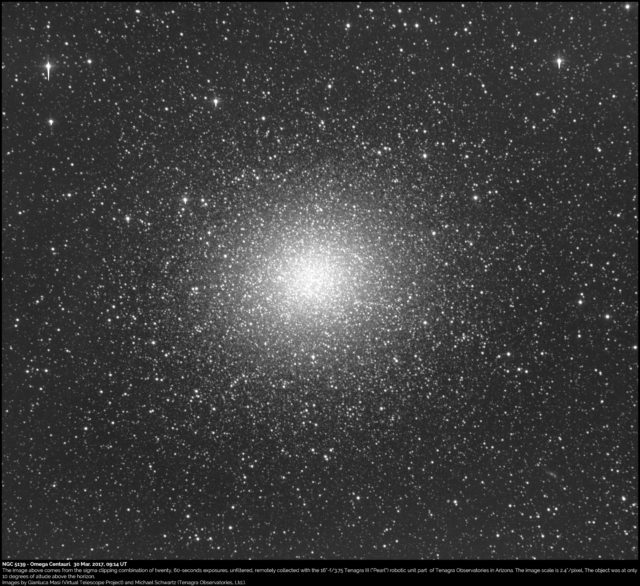 Placed at about 16.000 light years from the Earth  and hosting several millions of stars, Omega Centauri is one of the most fascinating and breathtaking objects we can image and observe, with our and yours telescopes.

With a glorious age estimated around 12 billions years, Omega Centauri could be the remnant core of an old galaxy swallowed by our Milky Way, a recent theory says; a record globular cluster, not only for our own Galaxy, but for the entire Local Group, following only the biggest Mayall II, orbiting Messier 31, the Andromeda galaxy.

The image above comes from the sigma clipping combination of twenty, 60-seconds exposures, unfiltered, remotely taken with the 16″-f/3.75 Tenagra III (“Pearl”) robotic unit part of Tenagra Observatories in Arizona. The imaging camera is based on the KAF-16801 CCD. The resulting image scale is 2.4″/pixel.

Such a unique gem like Omega Centauri, though, is not visible to all: placed in the Centaurus constellation, with a declination of -47°, it can be seen only below the 40th parallel north or so, being a typical southern jewel. During our imaging session, the object was only 10 degrees above the horizon, but still amazing.

Back to the “Star Clusters” page