These days, at sunset, you can enjoy a stunning couple up there: planets Venus and Mercury, shining for a while in the twilight. Here they are a few images we captured from Rome. 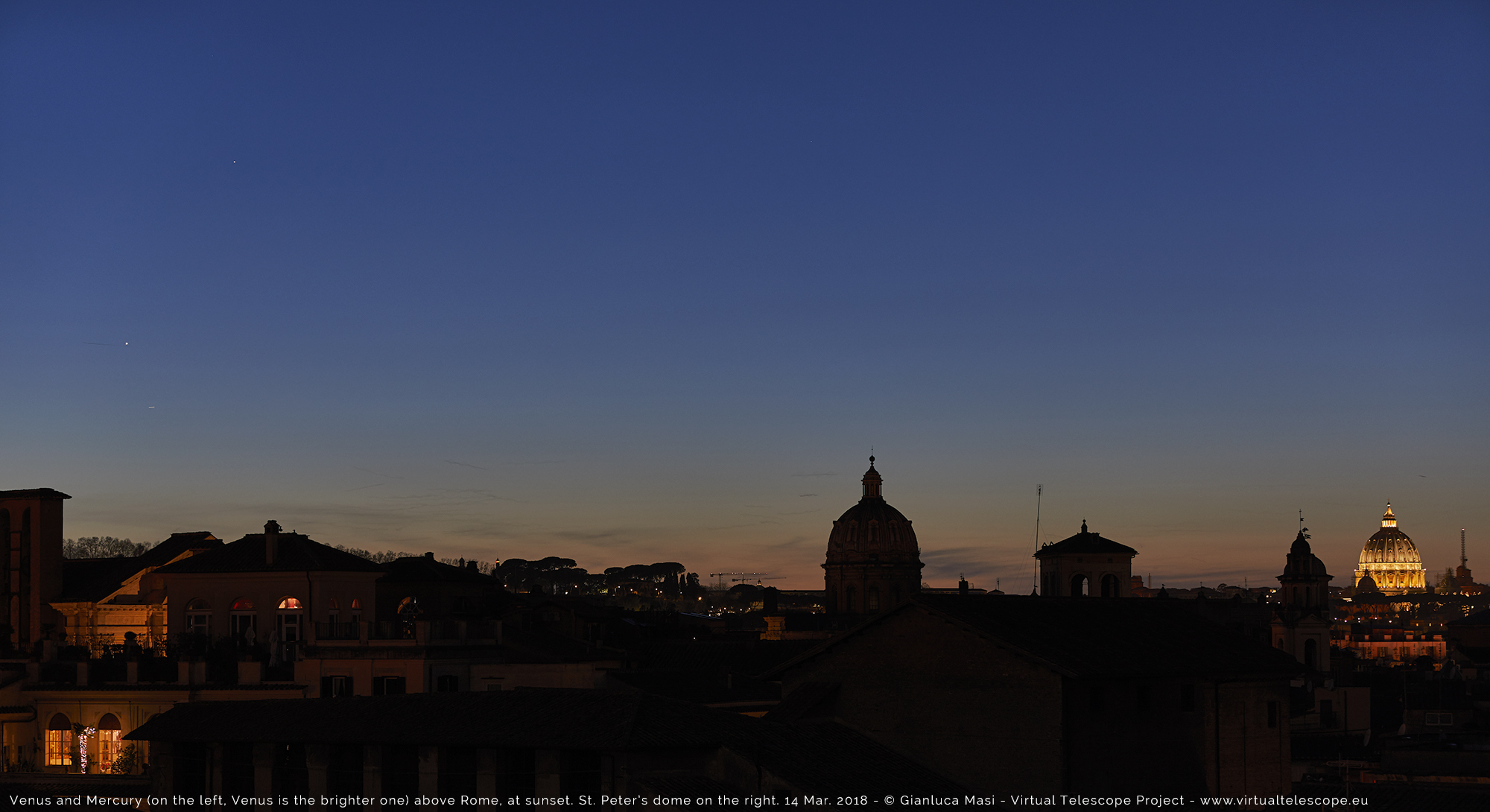 Venus and Mercury shine above the skyline of Rome, with St. Peter’s dome on the right. 14 Mar. 2018

At Virtual Telescope we love sharing the stars when Sky & Earth meet. These very days, at sunset, you can easily see one of these shows, involving the two innermost planets of our Solar System: Venus and Mercury. It is th ebest opportunity of the year to see Mercury from the Northern hemisphere.

Venus starts to show back in the evening and its brightness already dominates the sky at sunset. Mercury is there, too, for a few days, offering you one of the best opportunities to see it, especially with the brighter Venus telling you where to look.

I decided to capture this beautiful conjunction from Rome, knowing the skyline of the city was going to add its value, too. I managed to setup my imaging setup (a Canon 5D mark IV and a Canon EF 70-200mm f/2.8 L IS II USM lens, both mounted on a sturdy Manfrotto tripod) above the Capitoline Hill in Rome. 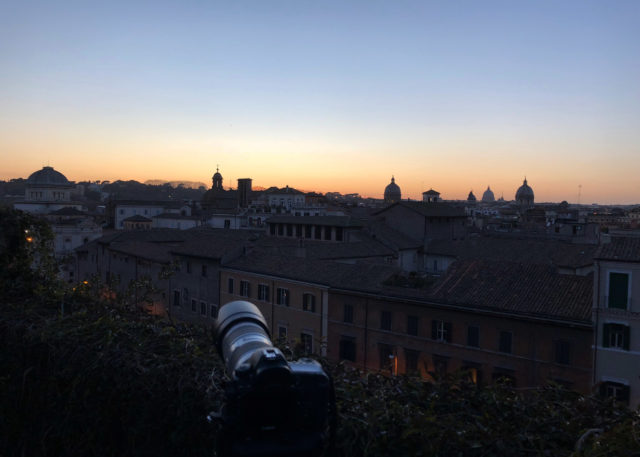 The imaging gear is ready!

As soon as the sky darkened, minutes after sunset, Venus was an obvious sight, but spotting Mercury was an harder task, initially. Once the sky was dark enough, both planets were so obvious that they could be seen even by casual stargazers. A couple of people, being in the same place as me, noticed both of them with no help, both looking not familiar with the sky. 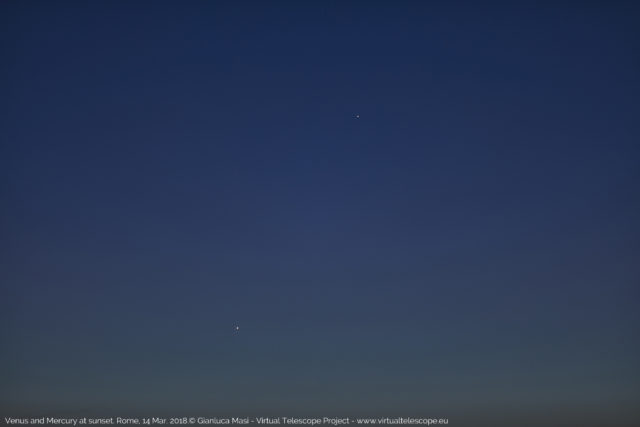 You may have seen such a conjunction many times, but you are never disappointed. Needless to say, the panorama adds its value and honestly it is very hard to compete with the skyline of Rome. 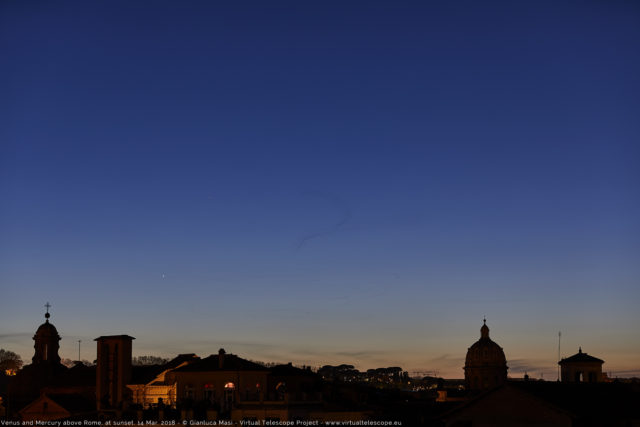 Minute after minute, the scene changed continuously, with Venus shining as a gem, the brightest object in the sky, after the Sun and the Moon. I enjoyed both the planets while they moved west, slowly setting. 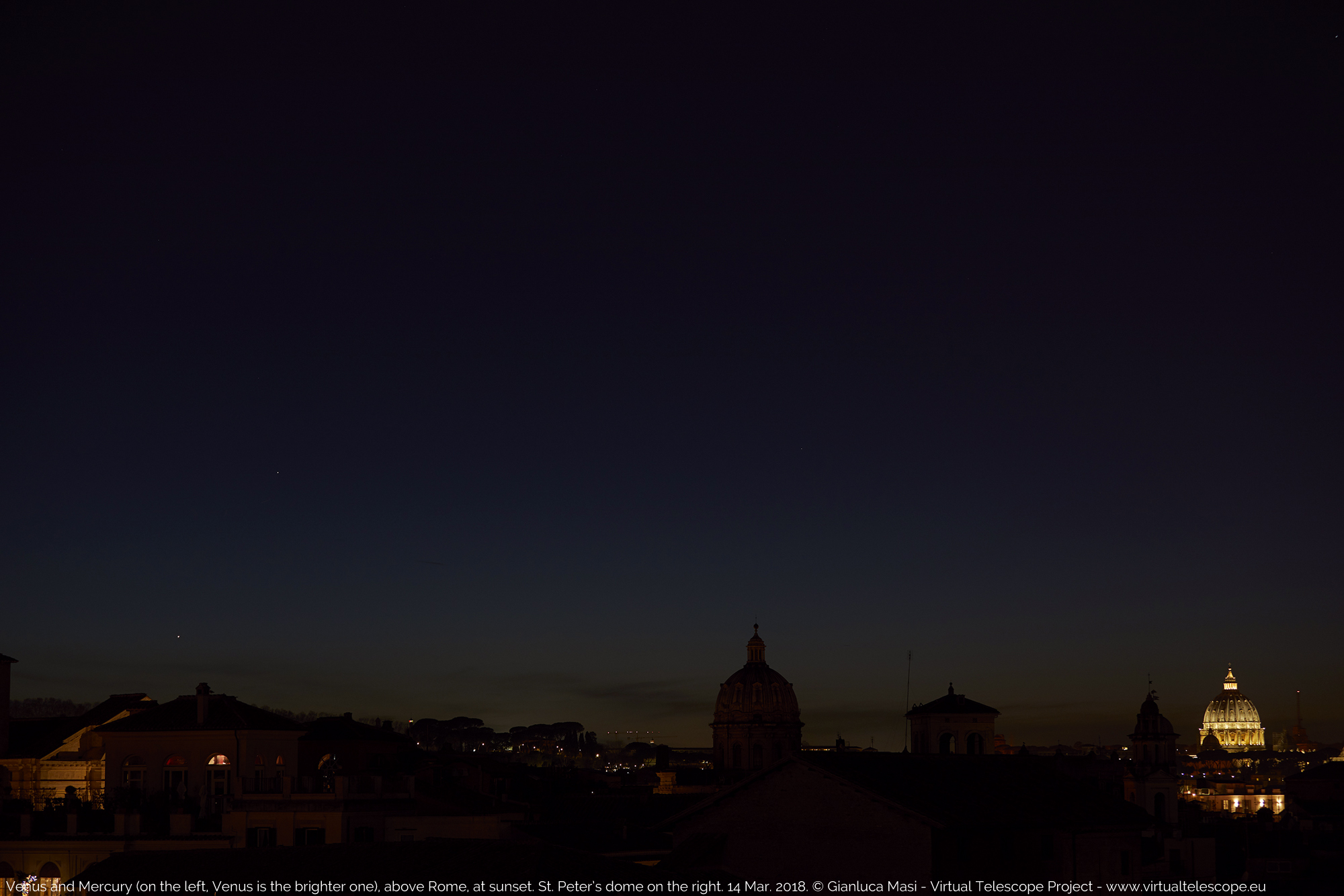 Venus and Mercury are ready to set while the night comes in Rome. St. Peter’s dome on the right. 14 Mar. 2018

Then Venus desappeared, leaving Mercury alone in a much darker sky. Looking at all this, with the legendary St. Peter’s dome, was an awesome experience.

I hope these pictures of mine will bring you the right feeling. I’m looking forward to the next show to share it with you: stay tuned!