We managed to do something honestly out of this world: imaging the Tiangong 1 Chinese Space Station during one of its final passes across the stars, before it will burn in the atmosphere. We could show this to thousands of people worldwide and here it is an image which we consider historic. 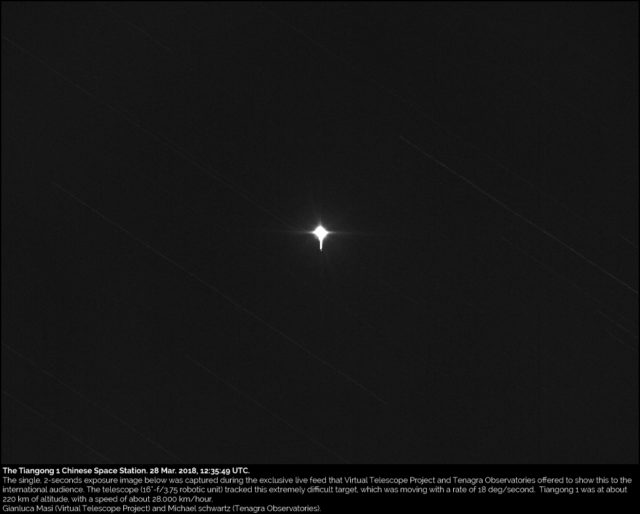 The image above comes from a single, 2-seconds exposure, remotely taken with the 16″-f/3.75 Tenagra III (“Pearl”) robotic unit in Arizona, available as part of the partnership between the Virtual Telescope Project (Italy) and Tenagra Observatories (Arizona, USA). The image scale is 3.6″/pixel.

At the imaging time, the Tiangong 1 space station was at about 220 km of altitude, about half of the altitude of the International Space Station (ISS), and moving with a speed of about 28.000 km/hour.

Honestly, this was an extremely difficult task. Asking the telescope to point and track such a EXTREMELY fast moving object (its motion rate was of 18 deg/minute at the imaging time), is something which very few observatories can do and the telescopes available at both Virtual Telescope Project and Tenagra Observatories facilities can. The Paramount ME and MEII installed there offer such a capability and both the facilities really stand out for the use they do of such an advanced feature.

This case was also difficult to plan. After we decided to cover it, the Tiangong 1 did now show any previous pass above Arizona or Italy before of this, so no tests could be done and we had to do a lot of theoretical calculations to guess when and where to slew the telescope, being sure we could track it for a while (the station apparent speed at its maximum was much more than the mentioned 18 deg/minute, so we had to point it until it was withing the superb tracking capabilities of the robotic mount). So, this success awards both the stunning technology and the work done at  the involved facilities.

Below find the podcast from our amazing live feed:

Now, we expect the Tiangong 1 will reenter our atmosphere sometime around this next 1 April, we will see if another pass will be offered us to share with the community.

Earlier this month, we could capture the Tiangong 1 station from Rome, while it was crossing the winter stars.

We are so proud, but we are especially happy we are able to bring to the world these historic events and never seen before experiences.