It is now official: we have the first interstellar comet ever discovered. It is named 2I/Borisov, after we called it C/2019 Q4 for a while. “I” stays for “Interstellar”. Our data was published in the circular officially announcing this interstellar designation, here it is our image. 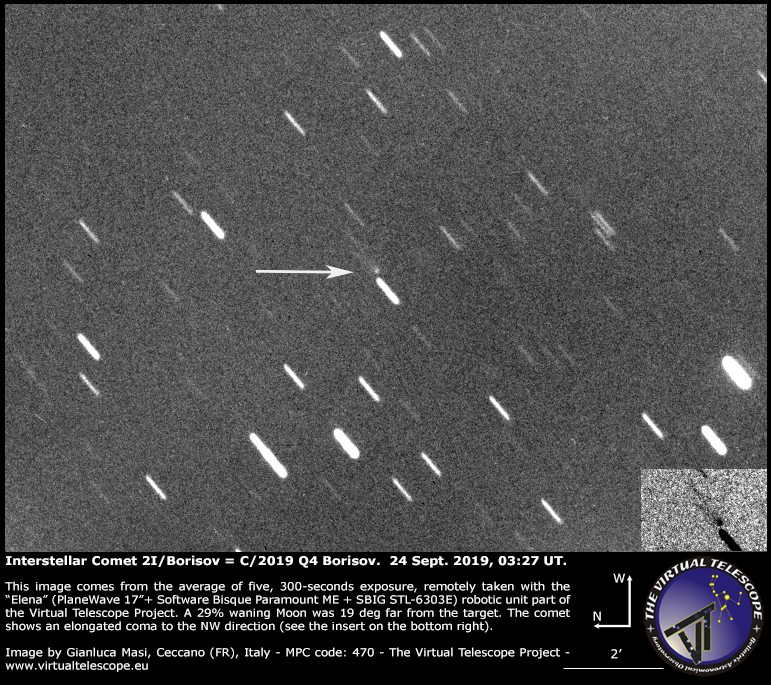 Few days after our initial observations of this interstellar interloper, we managed to do some follow-up imaging of comet 2I/Borisov, formerly named C/2019 Q4 Borisov. The International Astronomical Union made available a press release about this.

The image above comes from a the average of five, 300-seconds exposure, remotely taken with “Elena” (PlaneWave 17″+Paramount ME+SBIG STL-6303E) robotic unit available at Virtual Telescope. The telescope tracked the apparent motion (1.3″/minute) of comet C/2019 Q4, this is why stars show as long trails, while the object looks like a sharp dot of light in the center of the image. At the observing time, the target was less than 30 degrees above the horizon, with sunrise approaching and a 29% waning moon was less than 20 degrees from the object.

As usual, we performed astrometry on the images, sending the resulting data to the Minor Planet Center. They were published on the Minor Planet Electronic Circular 2019-S72, where the “2I” interstellar designation was officially introduced.

Looking at the processed frames, a little coma is visible, clearly elongated in the NW direction, confirming what we saw earlier. This is better visible in the inverted palette insert on the bottom right.

Of course, we will continue monitoring comet 2I/Borisov in the next weeks.