You might have read of (10) Hygiea these days, after some new observations suggested it could be another dwarf planet. On this wave of interest, we imaged it, also because it is an Italian discovery and its author, Annibale de Gasparis, would have been bicentenary next 9 Nov. 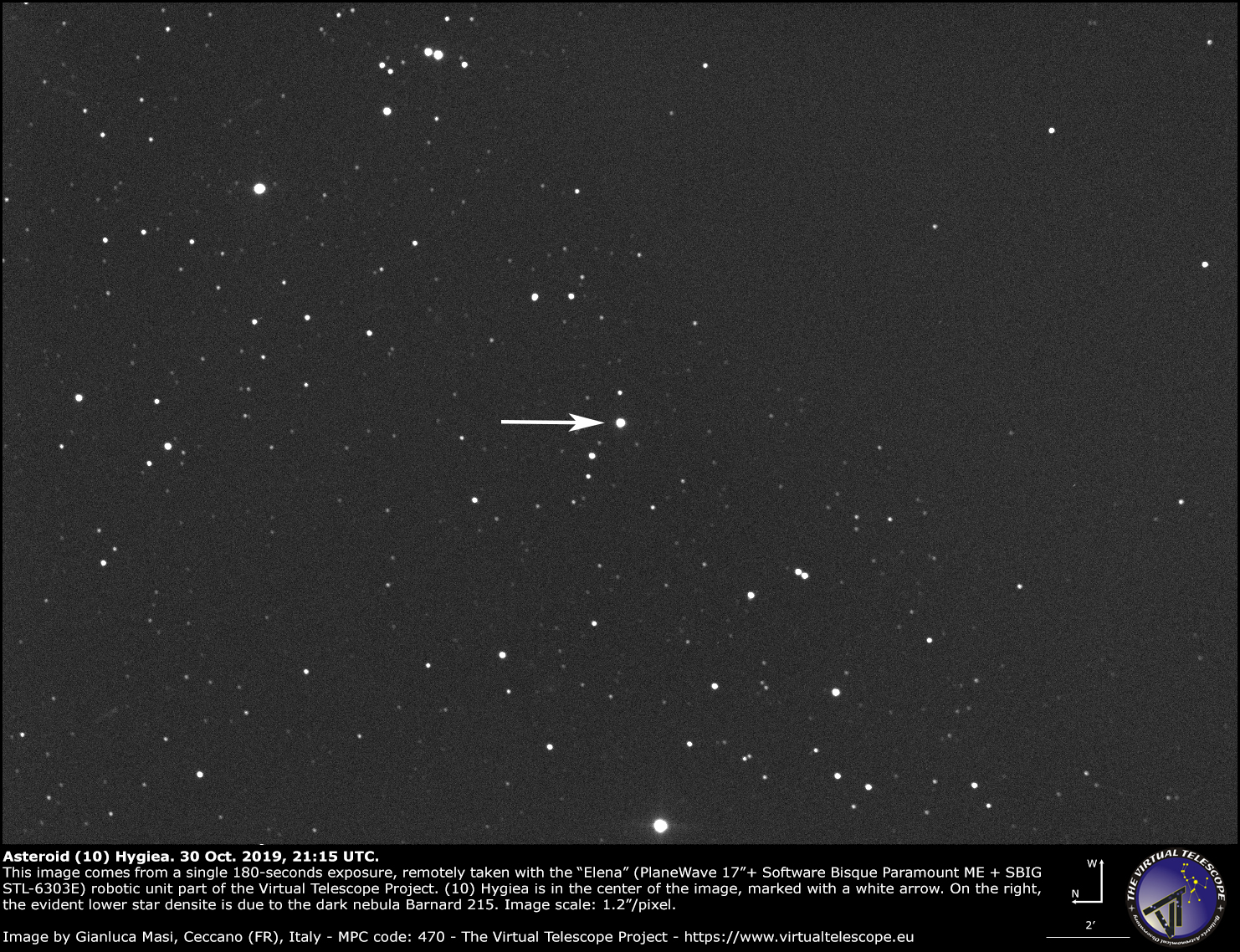 Our Solar System is far from being a boring place. If you believe we know everything about it, you are absolutely wrong. I could speak for hours about this, luckily it is enough to remind you that in 2006 (not centuries ago), we managed to revise the status of Pluto, introducing a formal definition for what is a planet (and Pluto does not fitting with it), with the consequence that now it is a dwarf planet, with an handful of more friends.

Just to give you an idea of both the complexity and importance of this issue, it is enough to mention that there is not a defined list of dwarf planets: on the heels of the decision to demote Pluto to dwarf planet status (this is still a heated discussion), five dwarf planets are generally accepted: Ceres, Pluto, Eris (these three were declared dwarf planets soon after Pluto was demoted), Haumea and Makemake. Of course, there are more possible ones, also depending on further criteria: Quaoar, Sedna, Orcus and 2007 OR10 are often mentioned, too.

Among the original criteria assumed to consider a given body a dwarf planet, there is this one: “[the object] has sufficient mass for its self-gravity to overcome rigid body forces so that it assumes a hydrostatic equilibrium (nearly round) shape” to be called “dwarf planet”.

Observations of asteroid (10) Hygiea done with the European Southern Observatory’s  Very Large Telescope (VLT) in Chile revealed this object could be seriously considered as another member of the small dwarf planet family. It turned out to be round enough, among other things, to be possibly the smallest dwarf planet in our Solar System. This is not straightforward: someone noted that the past of (10) Hygiea include a severe collision (and in fact it is the biggest member of the largest asteroid family we know) and this could have helped in shaping the object, so that the “reason” of the round shape could not be genuine enough versus the IAU criterium mentioned above. It is worth to mention that so far the only dwarf planet placed in the asteroid belt is (1) Ceres, the first former asteroid discovered on 1 Jan. 1801 by Giuseppe Piazzi, Italy.

These considerations tell us how important both this object and its recent observations are. For us Italians, this has something more to be mentioned, though.

(10) Hygiea was discovered on 12 April 1849 by Annibale de Gasparis, from the Napoli Capodimonte astronomical observatory. It was the 10th minor planet to be found. It was named Hygiea by the observatory’s director at that time, Ernesto Capocci (who was born in Picinisco, not far from where our telescopes are).

Incidentally, in a few days (9 Nov.), we will celebrate the 200 years after De Gasparis’ birth, so this intriguing view of the VLT on Hygiea arrived very timely.

At the Virtual Telescope we managed to observe it.

The image above comes from a single 180-seconds exposure, remotely taken with “Elena” (PlaneWave 17″+Paramount ME+SBIG STL-6303E) robotic unit available at Virtual Telescope. (10) Hygiea is in the very center of the image, marked with a white arrow.

It is interesting to note how on the right side of the image we see much less stars than on the left. This is because on the right there is a dark nebula, Barnard 215.

How many incredible things are behind an apparently pointless dot of light!