Among hundreds of thousands of known asteroids, only 21 ones are known/suspected to have an orbit entirely inside that of the Earth. The just discovered 2020 AV2 is the first one to move entirely inside the orbit of Venus, being a very special object. The Virtual Telescope Project contributed to confirm its discovery and here we are proud to present our image. 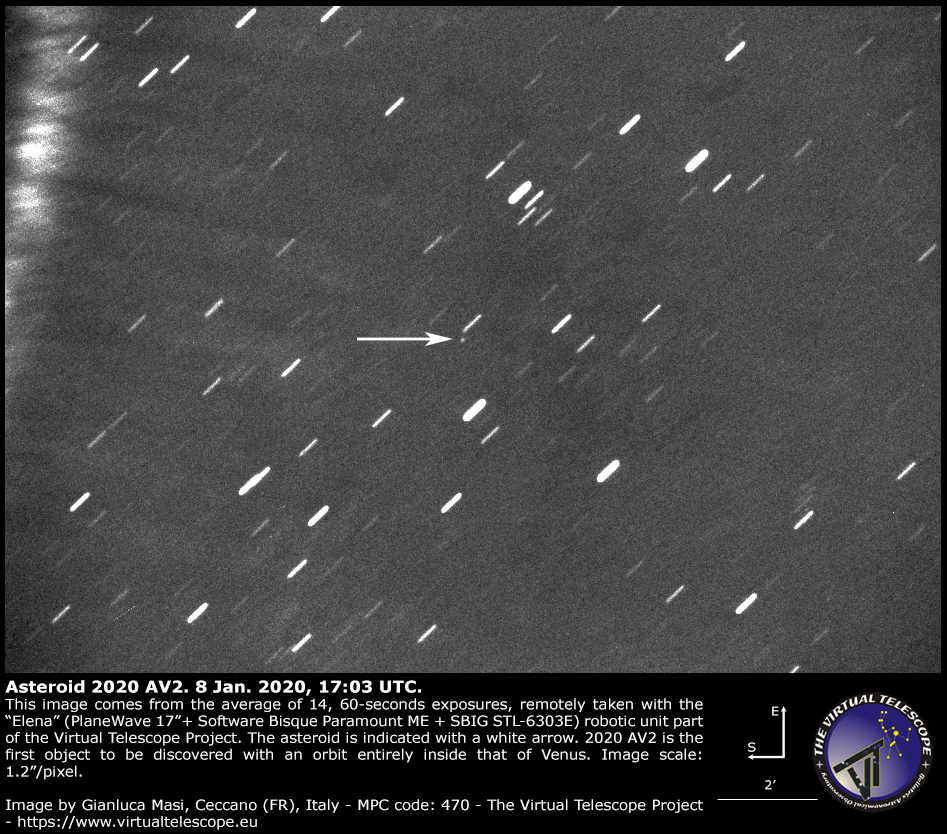 The image above comes from the average of 14, 60-seconds exposures, unfiltered, remotely collected with the “Elena” (PlaneWave 17″+Paramount ME+SBIG STL-6303E) robotic unit available at the Virtual Telescope Project. 2020 AV2 is indicated by a white arrow. The image scale is 1.2″/pixel.

This object is certainly special: it is the first one ever found on an orbit entirely inside that of Venus. 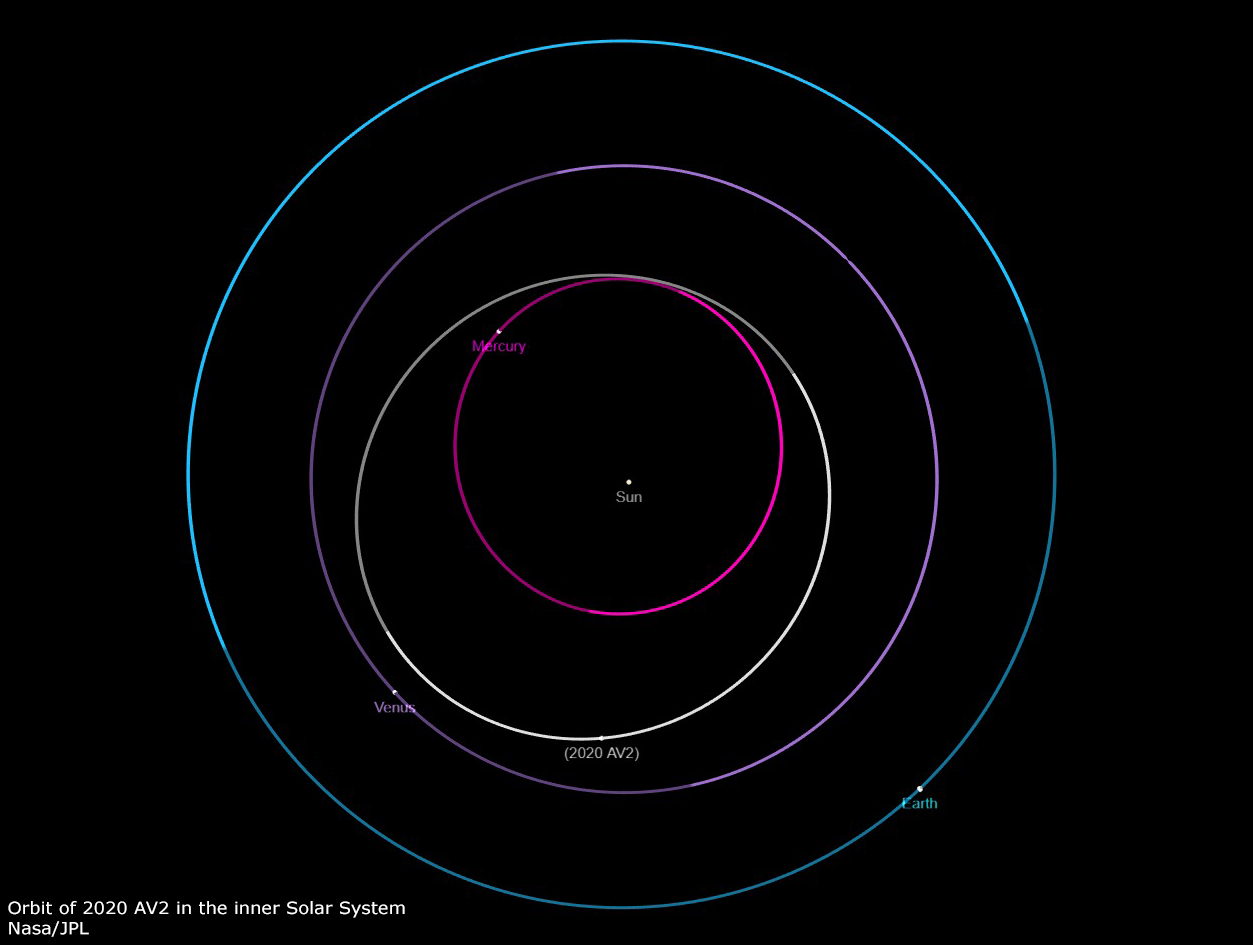 We know quite a number of asteroids. The Minor Planet Center people say they have (18 May 2019) about 792000 orbits on their archives. That is a lot and they are orbiting around the Sun at a distance spanning a very large range.  If we query that database, asking how many of those objects have an orbit entirely inside that of the Earth (Inner-Earth Objects, IEOs, defined by their aphelia Q < 0.983 AU), we get back ONLY 21 ones, accordingly with the Nasa’s JPL. Clearly, they are difficult to find.

You can easily understand why finding a IEO is hard. Ask yourself: how many times have I seen Jupiter? How many times have I seen Mercury? Very likely, you saw the former much more often than the latter. Why? Because Mercury’s orbit is well inside that of the Earth, so you can see the innermost planet only at dusk, low on the horizon and for a short time. In other words, from the Earth, you can never see Mercury (and Venus, for the same reason) in complete darkness and high in the sky, when observing conditions would be much better and much more technically feasible for the telescopes involved in these survey projects. Observing at low solar elongations is hard. This difficulty adds to the expected small number of  IEOs out there, estimated to be just 2% of the more common near-Earth objects (NEOs): the intervenusian objects are much less, likely 0.2% of the NEOs.

Many years ago, I studied the problem of finding Inner-Earth objects from our planet in depth. It was actually the topic of my degree thesis and I published the results on Icarus,suggesting a possible strategy to look for them. I remembered this to make clear how much I’m interested in these very special objects.

On 4 Jan., the Minor Planet Center reported the discovery by the Palomar Transient Factory (PTF) of the object ZTF09k5, which very preliminary orbit indicated it was, indeed, a very interesting finding: it was likely spending all its time around the Sun inside the orbit of Venus.

Needless to say, as soon as I learned about it, I wanted to observe this object via the Virtual Telescope Project and contribute to its discovery. Unfortunately, I had to face clouds for several days, making impossible to observe such a very low object at dusk. Last night, at last, the weather was with me and soon after sunset I managed to carefully prepare the robotic telescope in Ceccano, Italy, a site recognized by the Minor Planet Center with the code 470. I had more or less 30 minutes to try!

Taking those images was hard, because the object was quite low (25 deg or less) above the western horizon, at dusk. The sky background was bright, an almost full Moon was up in the sky too and the target was lower and lower, minute after minute.

Carefully combining the images, taking the apparent motion of the object into account, I could record ZTF09k5, measure its positions and send them to the Minor Planet Center by email. A few hours later, the MPC issued the discovery circular MPEC 2020-A99, with the object now named 2020 AV2 and including my observations (indicated my the MPC observatory code 470 – Ceccano). Now, I’m pleased to share the image of this rare object with you.

Now we know that 2020 AV2 really has its orbit entirely inside that of Venus, so being  the first one of this kind to be ever discovered; also, it is the natural object with the smallest known aphelion distance in our Solar System (excluding planet Mercury). With asteroid 2019 LF6, discovered by the same team, 2020 AV2 has the shortest orbital period known so far in the asteroid population.