While the worldwide press is talking about it, we imaged the Potentially Hazardous Asteroid (52768) 1998 OR2, while it is slowly and safely approaching us. This 1.8-4.1 km large minor planet will be at about 6.3 millions of km from us next 29 April, of course with no risks at all for us. While waiting to share it live, here it is our image from last night. 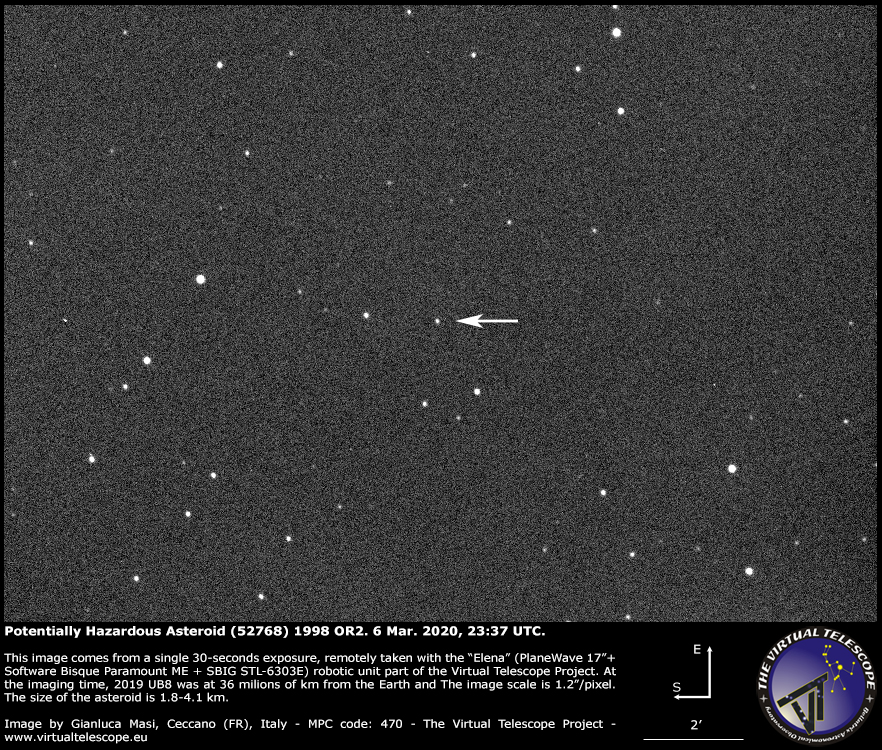 The image above comes from a single, 30-seconds exposure, remotely taken with “Elena” (PlaneWave 17″+Paramount ME+SBIG STL-6303E) robotic unit available at Virtual Telescope. The sky was very bad, with many clouds up there and an almost full Moon, making the effort to capture it quite hard. But we were lucky. The asteroid is in the center of the image, marked by an arrow.

At the imaging time, (52768) 1998 OR2 was at about 36 millions of km from the Earth. It will come as close as 6.3 millions of km from on next 29 April, 16 times more distant than our Moon: as you can see, it is a huge distance, so talking about this large (1.8-4.1 km) asteroid as if it is going to be a problem is not correct. While it will not hit us, it is so big that we will see it even with small instruments, enjoying its motion across the sky. We planned a live feed covering this rock around its fly-by with us, next 28 April.