The whole Universe live, online and just a click away – From the North Star to the Southern Cross.

The Virtual Telescope Project and Telescope Live announce a partnership that will make it possible for everyone to enjoy stars and celestial phenomena from both the Southern and Northern Hemispheres online in real time.

The wonders of the Universe are ready to unveil themselves to enthusiasts and curious people from all over the world, like never before. From the Pole Star to the Southern Cross, the Northern and Southern skies will no longer have any secrets whatsoever.

The Virtual Telescope Project, an international leader and reference in real-time coverage and sharing of the main celestial phenomena, is proud to announce the start of an important, mutual collaboration with Telescope Live, a pioneer in the offer of remote telescopes and online services for astronomical photography from the darkest places on the planet.

Thanks to this partnership, it will be possible to share worldwide stars and celestial events, in real time, involving both the Northern and Southern Hemispheres – the latter particularly appealing to our imagination.

The result is a gateway to the Universe with no geographical constraints, which will range from one end of the sky to the other. For the first time, the entire cosmic panorama can be explored live in a format that has proven to be extraordinarily successful.

Both the Virtual Telescope Project and Telescope Live have important success stories, with an extraordinary reputation as unique initiatives in the world.

Founded by astrophysicist Gianluca Masi, the Virtual Telescope Project (www.virtualtelescope.eu) began its scientific adventure in 2006. It offered a never-seen-before experience to the world – the exploration of the Cosmos live and online, with real-time images and live commentary from an astrophysicist skilled in science communication.

Over the years, thanks to remarkable scientific activity, numerous discoveries and countless memorable live events, the Virtual Telescope Project has earned an extraordinary international reputation. Its contributions and contents are regularly featured by the most important media in the world and online events are watched every year by over a million people from all over the globe.

They mainly make use of Italian telescopes owned by the project. That’s complemented by a team of international collaborators for the most popular phenomena, such as solar and lunar eclipses, which aren’t visible from the country.

The mission of Telescope Live (https://telescope.live/) is to make astrophotography more accessible and facilitate the observation of the wonders of the cosmos. Since its foundation, the British company founded and currently run by Marco Rocchetto has always worked to break down the barriers that have prevented most people from enjoying and practicing astrophotography and observing astronomical phenomena. To date, this mission is carried out thanks to a sophisticated online platform and a network of professional scientific telescopes installed in both hemispheres, which collect images of celestial objects every clear night.

Images from observatories in Chile, Spain and Australia are uploaded daily to a constantly expanding archive, containing hundreds of thousands of images and raw data – making them available to all of the platform’s users. In addition to the world’s largest private archive dedicated to astrophotography, Telescope Live users can enjoy an observing mode that gives full freedom to enthusiasts who wish to observe a particular astronomical target according to their very specific indications.

Finally, Telescope Live also offers to its members an internal learing section on the platform, curated by internationally renowned astrophotographers and astrophysicists. Users can learn new techniques related to astrophotography, as well as enjoying content dedicated to scientific astronomy disseminated in a clear and simple way. Content that’s easy to understand, even for an audience with no prior knowledge of astronomy.

The collaboration will bring significant benefits to the dissemination of the scientific culture. Thanks to the longitude of the telescopes involved, it will also give people access to the sky in real time even during their daytime hours.

“I am really very happy with this collaboration with the Telescope Live team, which I thank for their availability”, says Gianluca Masi, founder and scientific director of the Virtual Telescope Project. “It will allow us to share with the whole world, thanks to an important partner, astronomical events invisible from Italy, where our own telescopes are located”, adds the astrophysicist, who concludes that “the Northern and Southern skies have never been so close and accessible.”

“We are thrilled to make our network available to The Virtual Telescope Project,” commented Marco Rocchetto, founder and CEO of Telescope Live. “For years we have been following with interest the development and the dissemination activity carried out masterfully by Gianluca Masi and his entire team,” said Rocchetto. “It will be an honor for us to actively contribute to this project and to the scientific dissemination of astronomical phenomena thanks to our telescopes present in both Hemispheres,” he concluded. 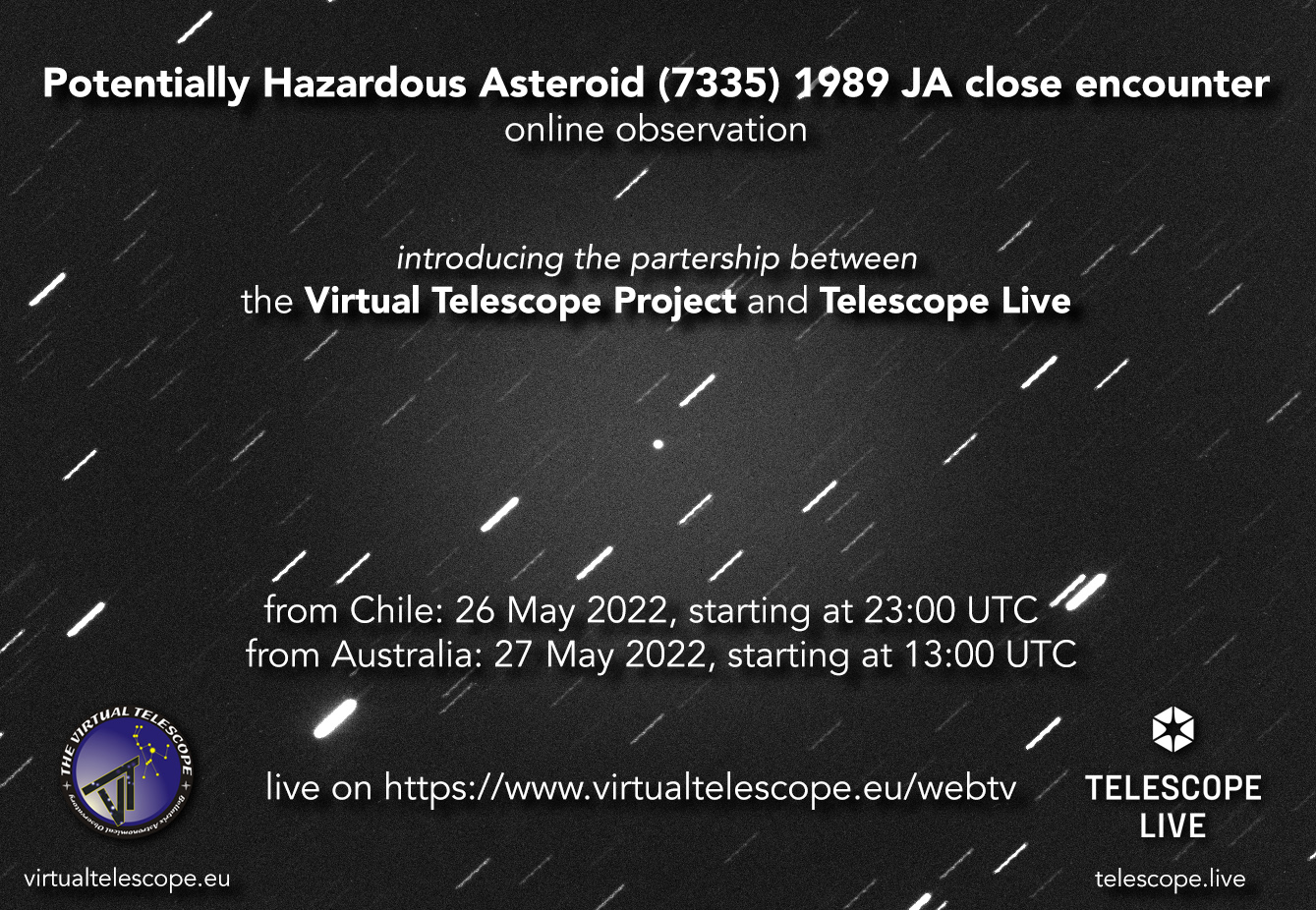 To properly introduce this important partnership, the Virtual Telescope Project and Telescope Live invite the international community to join a truly special online event: the live observation of the close-approaching, potentially hazardous asteroid 1989 JA. This large minor planet – 1.8km in diameter – will come as close as 4 million km on 27th May 2022, when it will be perfectly placed in the Southern sky. We will share it in real time, thanks to the telescopes available in Chile and Australia.

To join, you just need to enter, at the dates and times above, the webTV page here!