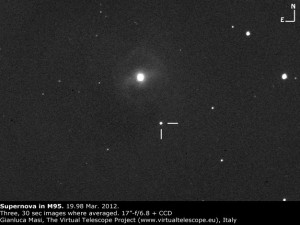 Confirmation image of SN 2012aw obtained at the Virtual Telescope

On 16 March 2012, supernova SN 2012aw was discovered in Messier 95, a well-know and wonderful barred spiral galaxy in Leo, distant about 38 millions of light year.

As soon as the suspicious object was reported to the community, the Virtual Telescope managed to confirm its presence amd estimate its brightness. The sky was not good at that time, but we were lucky enough to spot the object among the clouds.

Data from those early observations were inclued by the Central Bureau for Astronomical Telegrams in the discovery announcement (access limited to IAUC subscribers).

On the follwing nights, SN 2012aw was imaged several times, under definitely better sky conditions. Images are available below. 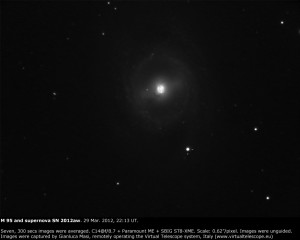 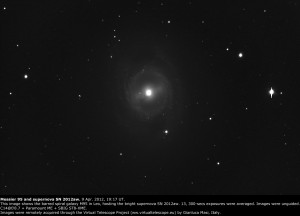