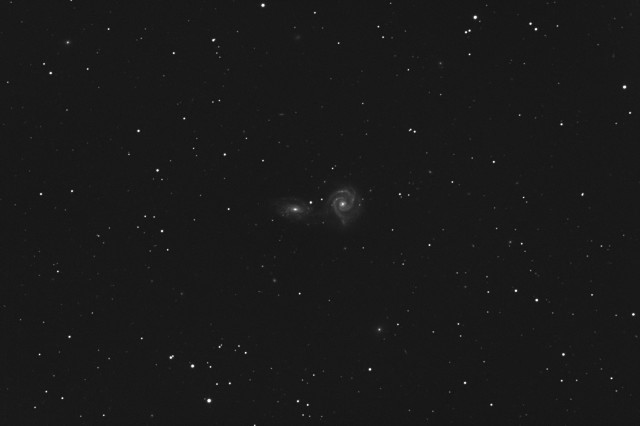 In the vastness of space and time, there are still chances for galaxies to meet. To the point that they can look as embracing, elegant butterflies of stars, obeying to the universal force of gravitation.

The steps of this cosmic dance last tens of millions of years, while the interaction between the two galaxies triggers the formations of new stars.

At Virtual Telescope we had a quick look at a very beautiful example, the couple NGC 5426 + NGC 5427, also known as Arp 217, placed at about 90 millions of light years from us. The two galaxies are beautifully showing under different perspectives: while NGC 5427 is visible face on, NGC 5426 is laying somewhat obligue, adding a 3D perception in the vision.

The image above was obtained with the 17″ robotic unit, while the sky was still not dark and the galaxies were at about 40 degs above the horizon.

Back to “galaxies” page