You can read a report about this amazing live event. We hosted more than 100.000 individuals from about 160 different Countries. A planetary success! 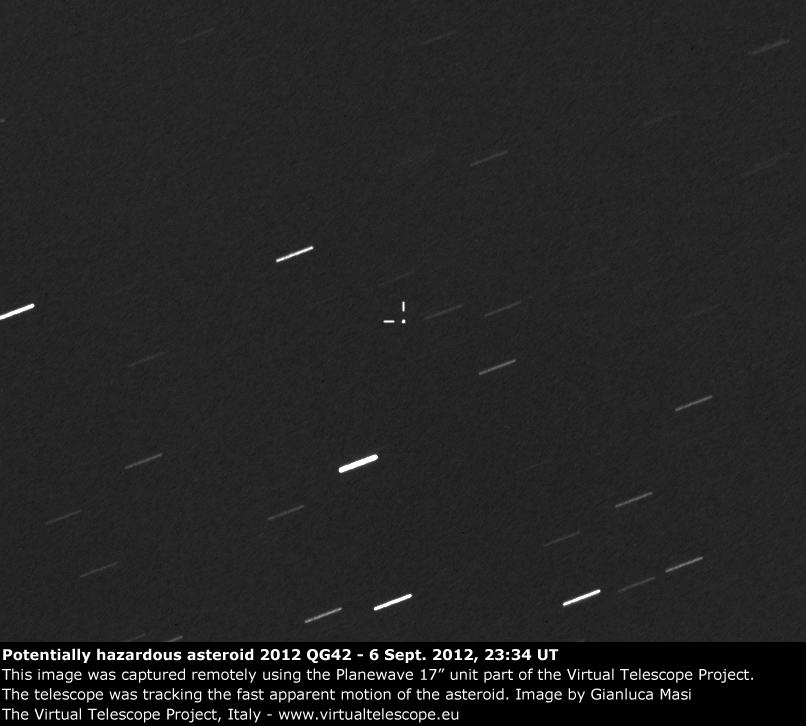 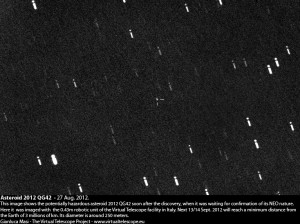 The potentially hazardous asteroid (PHA) 2012 QG42 was discovered on 26 Aug. 2012 by the Catalina Sky Survey in Arizona; the Virtual Telescope in Italy contributed to confirm its nature within few hours after the first report. Our observations were included in the discovery circular issued by the Minor Planet Center.

On 14 Sept., this about 250-300 meters large body will approach our planet, reaching a minimum distance from Earth of about 7.4 lunar distances. This is definitely a safe distance, so there is really nothing to worry about this encounter, it will be just a nice show.

During this passage, asteroid 2012 QG42 will be relatively bright to be seen with mid-sized telescopes. It will show a quite fast apparent motion across the stars, while its speed relative to the Earth will be of 11 km/s.  It will be well visible for several days, so a nice chance for observers to spot a near-Earth object!

The Virtual Telescope Project is proud to offer a FREE, online event, showing the asteroid in real time, through its well known technological instruments.

The live event is scheduled for 13 Sept. at 20:00 UT: to join, you just need to enter, at the date/time indicated, our live WebTV page. Save the date!