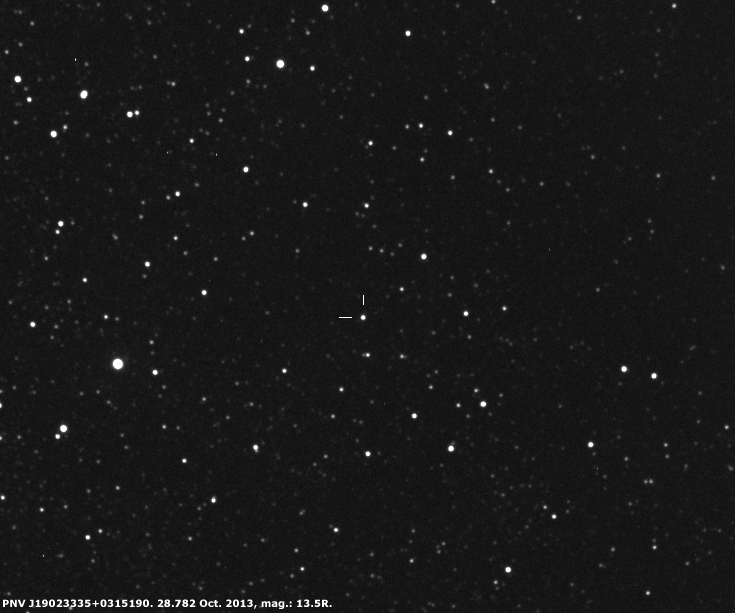 As soon as the transient was listed on the TOCP, the PlaneWave 17″ robotic unit part of the Virtual Telescope was slewed to its position, rapidly setting on the west. A sequence of 30 seconds images was stated and the transient was immediately located in the center of the frames.

Above is the average of five, 30-seconds unfiltered exposures, with the transient marked in the center of the field. On 28.782 Oct. we spotted the nova candidate at mag. 13.5 R. At the imaging time, the source was at 30 deg. above the horizon and setting. We also performed astrometry against UCAC-4, getting the following end figures: 33.38s; 18.9″ (J2000.0, mean residualsoof 0.2″ on both axes).

Meanwhile, the Celestron C14 robotic unit, equipped with a 100 lines/mm diffraction grating, started collecting spectra. Averaging five, 300-seconds exposures we saw emission at H-alpha. Because of the low altitude of the source at the imaging time, more data are needed to firmly conclude on this.

Our observations were reported on the AAVSO Special Notice #374. More data, especially spectroscopy is urged, to see if the emission is confirmed or not: at the imaging time the source was low above the horizon.

Spectroscopic follow-up was performed by Terry Bohlsen, Australia, who confirmed the H-alpha emission.