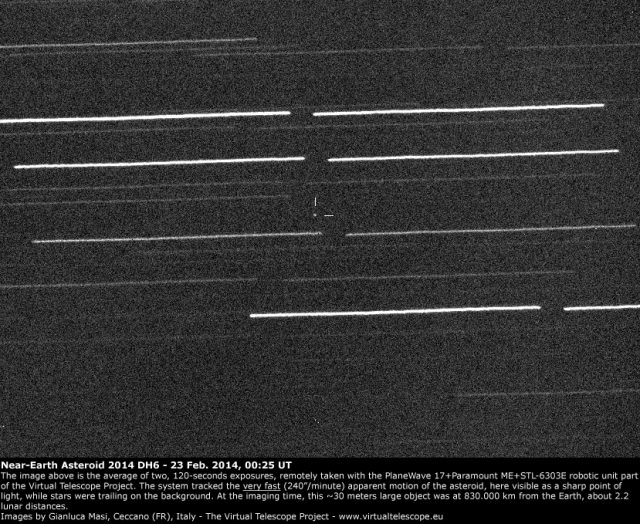 Last night, the Minor Planet Center announced the discovery of a small, ~30 meters large near-Earth asteroid, 2014 DH6. Because of its orbit, this rock was going to have a very close encounter with the Earth on 23 Feb. at 05:12 UT, that is a few hours later.

At Virtual Telescope we wanted to try to capture the asteroid, thanks to a finally clear sky. As soon as it rose above the Italian horizon, the Planewave 17 robotic unit was asked to catch it, despite of its amazingly high apparent motion: 240″/minute, that is one degree in 15 minutes (the angular size of two full Moon disks)! The Paramount ME robotic mount made that possible, thanks to its advanced features, including the tracking of very critical target like this: an ephemeris for 2014 DH6 was retrieved via Nasa’s JPL and the telescope tracked the asteroid on it in real time.

Above is an image coming from the average of two, 120-seconds exposures, showing 2014 DH6 as a sharp dot, while stars were slipping on the background. This picture is a great proof of the advanced technology available at Virtual Telescope.