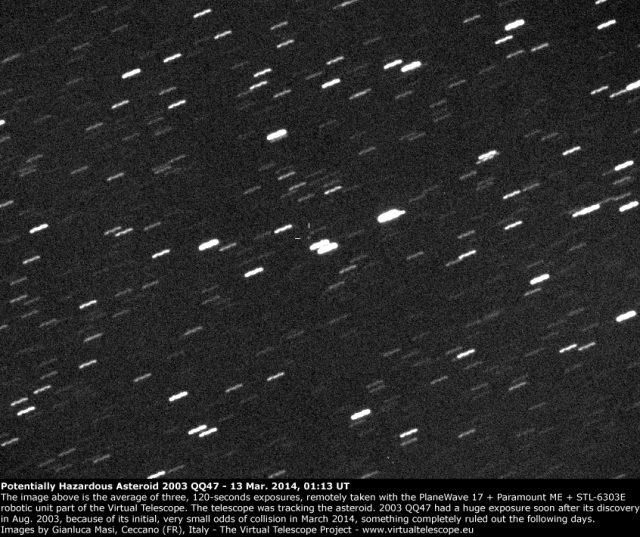 Next 26 Mar. 2014, at 12:36 UT, the potentially hazardous asteroid 2003 QQ47 will have a relatively close encounter with the Earth. This 1.5 km large object had an amazing exposure on the world media soon after its discovery in Aug. 2003, when – assuming the first few days of observations and the resulting preliminary orbit – it showed a  small chance of colliding with the Earth in Mar. 2014.

The odds of collision in 2014 peaked at 1 chance in 250,000, as from JPL/Nasa data. The very next days, new observations made clear no collision was going to occur. But 2003 QQ47 continued to feed many (unfounded!) discussions around the (web) world. Now that the date of the formal minimum distance is approaching, those unfounded rumors are rising again.

Above is an image of 2014 QQ47, remotely taken with the PlaneWave 17 robotic unit part of the Virtual Telescope Project. It is the average of three, 120-seconds exposures and the robotic mount tracked the object while imaging it. The object was, of course, where it was expected to be, now that its orbit is well-known, to the point that 2003 QQ47 was also numbered: it is now (143649) 2003 QQ47.