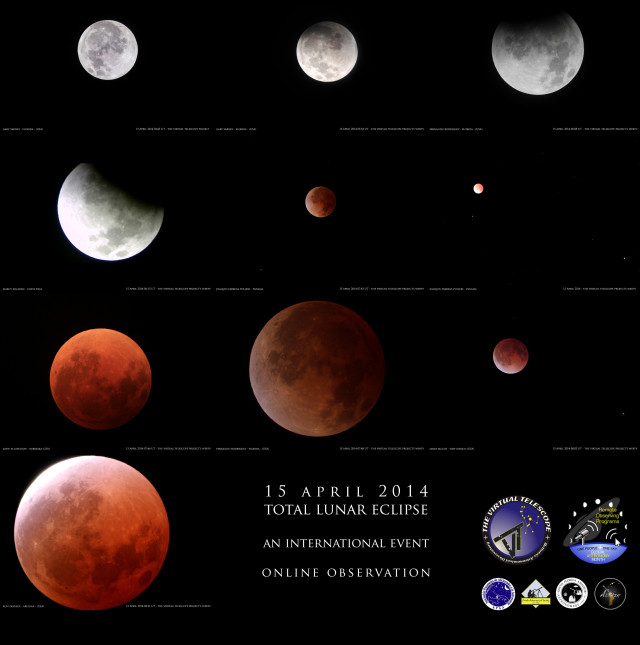 It is hard to comment last night event, covering the first eclipse of 2014, a total lunar one. Perhaps the best thing to say is that it was something we will not forget. For such a good train of great reasons. And, paradoxically, the very huge number of individuals who joined the live feed is not among the first ones.

Likely, this event will mark a record of cooperation among individuals living in very different parts of the globe, but with a tireless love for what is lurking out there and wishing to bring it down to Earth to other people to discover and enjoy.

The idea of the online session started on April 7. As you know, the Virtual Telescope Project is an international protagonist in sharing live, online, the most important astronomical events. Of course, they must be visible from Italy (where our robotic facility is placed), in order to be observed and shared through our telescopes. This lunar eclipse was not visible from our site, so we were going to miss it. Meanwhile, a lot of people worldwide asked us if we were going to offer something and before answering “no”… we did some brainstorming.

By coincidence, this April is the 5th edition of Global Astronomy Month (organized by Astronomers Without Borders) and in that framework we did several events this year. So those requests, added to the special meaning of April, motivated us to think about a solution.

So we did a call, looking for observers in the right place of the Earth ,willing to capture the eclipse and make their images available for us to share them live, via our network. We were lucky: in a few days, an handful of very enthusiast amateur astronomers responded from Panama, Florida, Arizona, Costa Rica, Nebraska and New Mexico, sharing with us the excitement for this endeavor. Soon, the team was built, on the common ground of a great love for the skies and the huge desire to bring the eclipse where it was not visible.

For us at Virtual Telescope planning the online view, discussing with the team members all the issues connected with the eclipse going online, learning from them they experience was a very rewarding activity. One of the greatest experiences of these last years.

This was the team who made the live feed possible:

The availability of such a live coverage traveled around the world, to the point that the most important media of the planed talked about it. The one provided by the Virtual Telescope, thanks to the team above, was one of the very few organized, the only one involving an international team, this enriching the meaning of Global Astronomy Month.

The great, friendly atmosphere made the event a planetary success, as well as the Moon. The queen of the night showed amazingly well to the eyes of our team and each member provided excellent images for the live feed. Here, the experience of each observer played a big role, as the amazing platform and the work philosophy of the Virtual Telescope.

At some point, there were so many people trying to join that they had troubles reaching us, but this was unavoidable. More than 80.000 viewers from more than 170 different Countries spotted the total lunar eclipse through our team. Images and comments made the magic possible, integrally bringing the emotional, ancestral experience of the eclipse to everybody.

Here it is the podcast from the whole event:

Below are some images captured by the team and broadcasted live 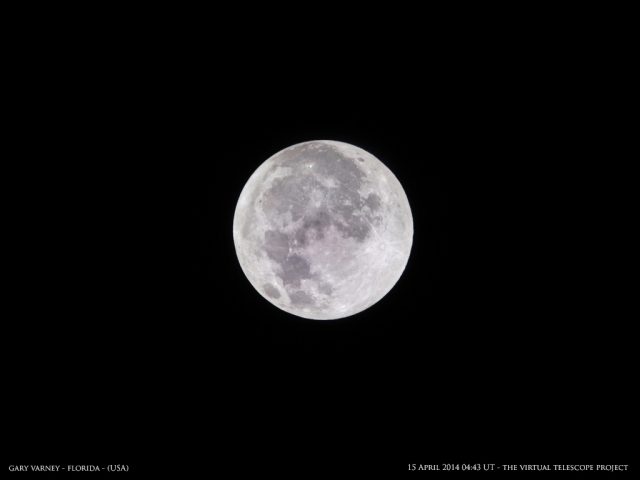 The Full Moon, still waiting for the Earth’s shadow. Image by Gary Varney, shared live via The Virtual Telescope Project 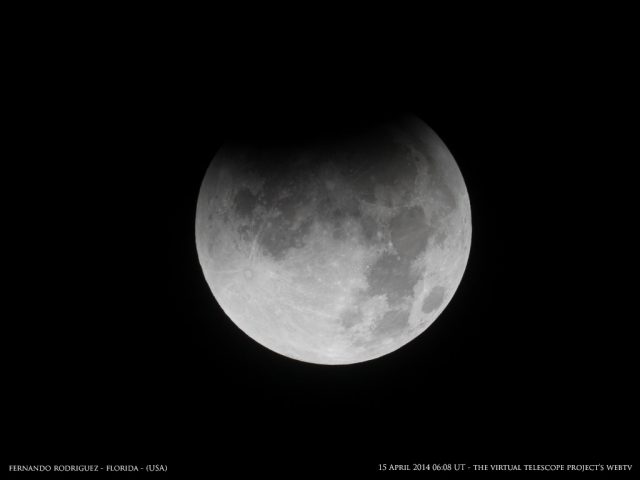 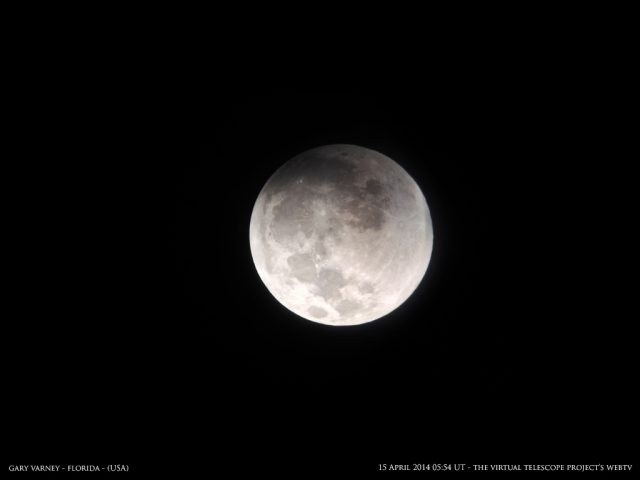 The Moon is here kissed by the Earth’s Penumbra, the eclipse started Image by Gary Varney, shared live via The Virtual Telescope Project 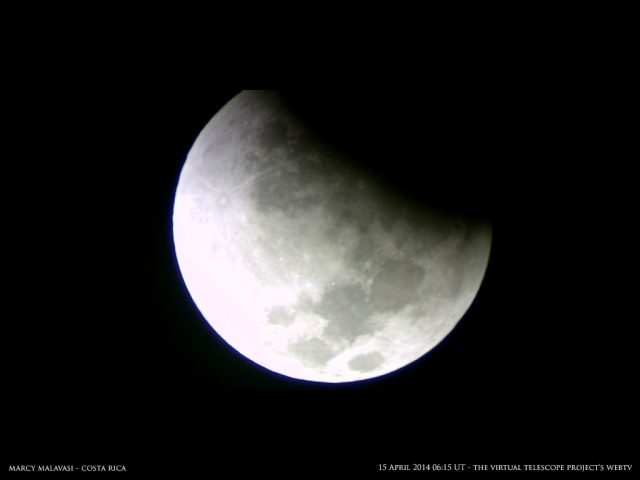 The Earth’s umbra is minute after minute conquering the Moon.Image by Marcy Malavasi, shared live via The Virtual Telescope Project 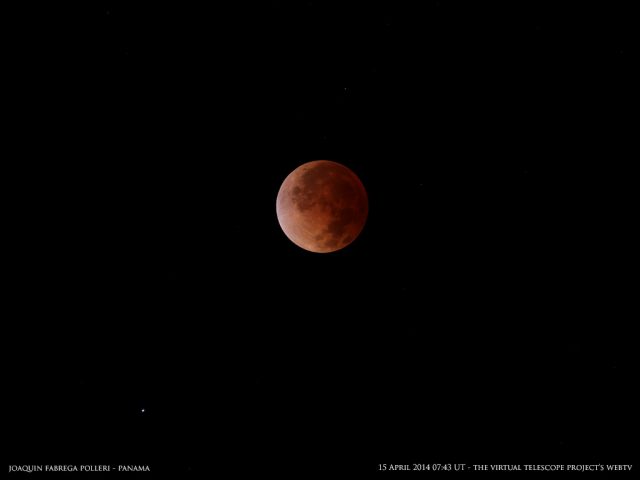 The Moon dresses its most elegant dress, a couple of minutes before the time of greatest eclipse, at totality. The bluish star Spica is on the bottom. Image by Joaquin Fabrega Polleri, shared live via The Virtual Telescope Project 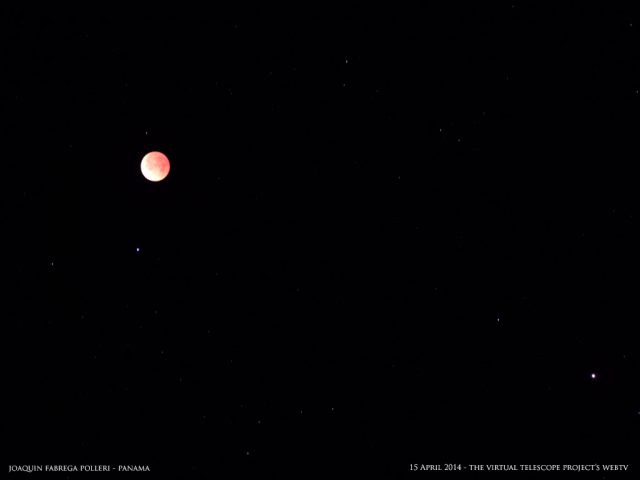 The Red Moon, totally eclipsed, did not “eclipsed” other beauties. This image captures the bright, bluish light of Spica and the rusty hue of planet Mars, on the right. Image by Joaquin Fabrega Polleri, shared live via The Virtual Telescope Project 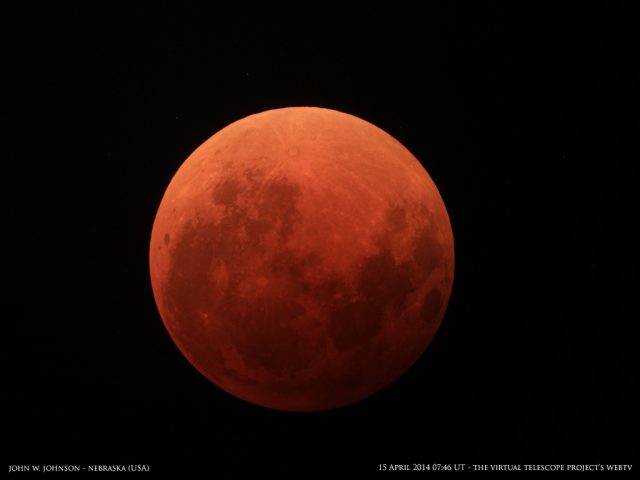 The “grandeur ” of the totality, in the very moment of the greatest eclipse. The long awaited instant. Image by John Johnson, shared live via The Virtual Telescope Project 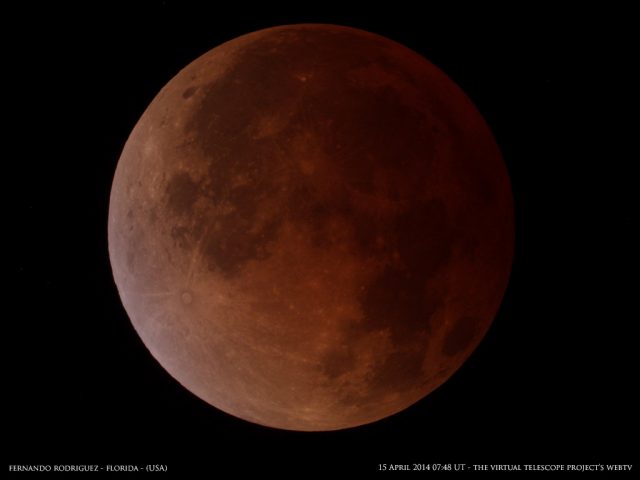 The untouchable color of the Moon at the greatest eclipse can be admired for countless minutes. Image by Fernando Rodriguez, shared live via The Virtual Telescope Project 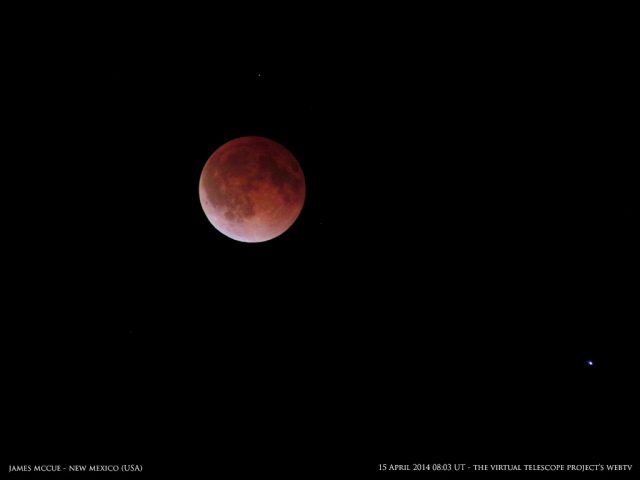 The totality is not long enough to fully enjoy its eternal beauty: it is preparing for leaving with grace. Image by James McCue, shared live via The Virtual Telescope Project 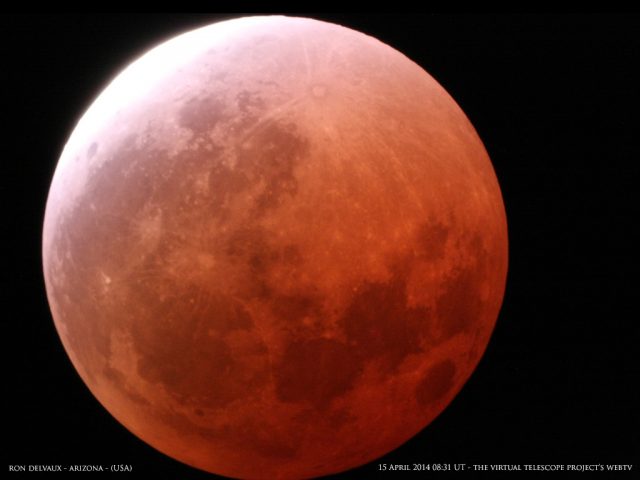 The Sun is back. The totality ended. But not our admiration and awe. Image by Ron Delvaux, shared live via The Virtual Telescope Project

As the coordinator of the event, I still want to express my gratitude to the team members for what they did, no matter the late hours, the cold or the humidity they had to suffer, also having a busy day to afford soon after the eclipse. You made this THE event. It was also great to share this in the framework of Global Astronomy Month 2014 and our friends of Astronomers Without Borders!

For us at Virtual Telescope it was the first time we’ve built such an international team to cover something not visible from our usual location and the experience was so amazingly rewarding that we will love to work again in this direction.

Sharing the sky, making possible to all to enjoy something they do not experience often and risk to miss in their lifetime is so personally enriching, especially when done with people like the one we luckily involved this time, that will be hard to resist.