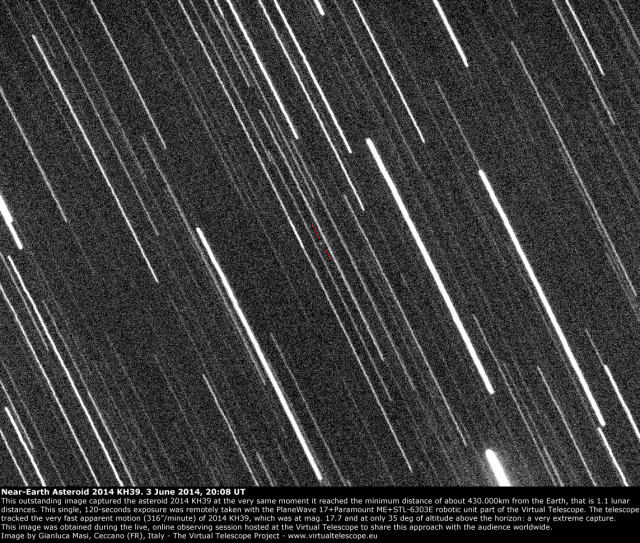 On the evening of 3 June 2014, at Virtual Telescope we hosted a live, online observing session to show the very close approach of the ~25 meters large near-Earth asteroid 2014 KH39. At 20:07 UT, this rock reached a minimum distance from us of 430.000 km, 1.1 times the average distance of the Moon. As clearly stated since the discovery of this object (24 May 2014 by the Mt. Lemmon Survey in Arizona), there were NO risks of collision with the Earth.

The live coverage offered by the Virtual Telescope made possible to almost 20.000 individuals from 128 Countries to have a look. The live event covered the very moment of the closest approach.

Above is an image coming from a single, 120-seconds exposure,  taken at the minimum distance time, during the show. It was captured with the PlaneWave 17 robotic unit, with the Paramount ME mount tracking the fast (316″/minute !) apparent motion of 2014 KH39, which was less than 35 deg above the northern horizon and fainter than magnitude 17.7. This image is one of the most amazing, possible proofs of performance a telescope can ever provide. We’re proud!

Below is the podcast of the whole event, if you missed this thrilling encounter, so beautifully covered by the Virtual Telescope Project.

Acknowledgements: this event was a joint effort with Ansa Scienza & Tecnica. The Virtual Telescope also thanks the space.com, Universe Today and EarthSky teams for featuring the event.

WE also wish to thank the technological partners of the Virtual Telescope Project.

Back to “podcast” page