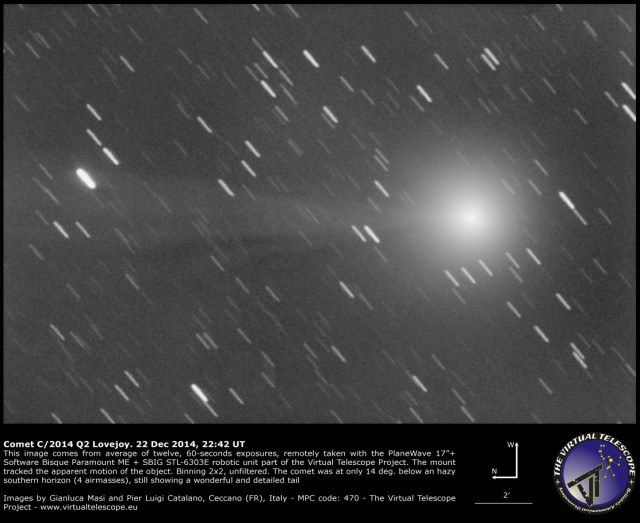 Those living under the northern stars have been waiting for it for so long. Now, comet C/2014 Q2 Lovejoy is climbing to the northern skies, after giving an amazing show in the austral heavens. All this perfectly timed for Christmas. What a beautiful comet Terry Lovejoy discovered, once again!

At Virtual Telescope we will track this beautiful object as long as possible. The first successful attempts to record it from our observatory was between 20-21 Dec., being one of the very first ones from our latitudes. On 22 Dec. a dedicated session was planned, even if the comet was reaching a maximum altitude of only 14 degrees (!) from our site in Central Italy.

The image above comes from the average of 12, 60-seconds unfiltered exposures, remotely collected with the  PlaneWave 17″+Paramount ME+SBIG STL-6303E robotic unit part of the Virtual Telescope Project. The telescope tracked at the apparent rate of the comet. Comet C/2014 Q2 Lovejoy was less than 14 deg above the southern horizon, that is at ~airmasses: this brutally affected its visibility, with a truly severe extinction, but the view was still amazing, with a detailed tail well visible.