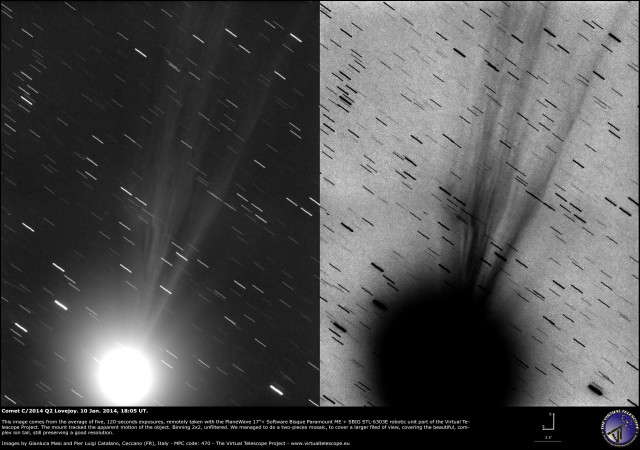 Finally, comet C/2014 Q2 Lovejoy is a true northern object. After so many weeks of great show in the southern skies, it slowly climbed the heavens and now is very well visible by those who were waiting for it under the Polar Star. Also, the Moon, so far a severe limiting factor, has gone away and we can enjoy the comet in a dark sky, since the beginning of the night. If you want to see it, this is your very moment!

While forecasts were not good, at Virtual Telescope we had a few minutes of reasonably clear skies, so we managed to capture a few new images. The perfection of our robotic system, able to be operational in less than three minutes, helped  a lot. This time, we wanted to cover a larger portion of the ion tail, still keeping an high resolution view, so we decided to create a two-pane mosaic.

The image above comes from the average of five, 120-seconds unfiltered exposures, remotely collected with the  PlaneWave 17″+Paramount ME+SBIG STL-6303E robotic unit part of the Virtual Telescope Project. The telescope tracked at the apparent rate of the comet. As we said, two adjacent portions of the sky were imaged, later carefully superimposed, to cover a much larger field of view.

The tail is showing in a very magnificent way. Thanks to the mosaic technique, our image cover a good field, still providing an excellent resolution of the many complex features making this comet a joy to see. We provide also a negative palette, making easier to see the complex pattern of the tail.