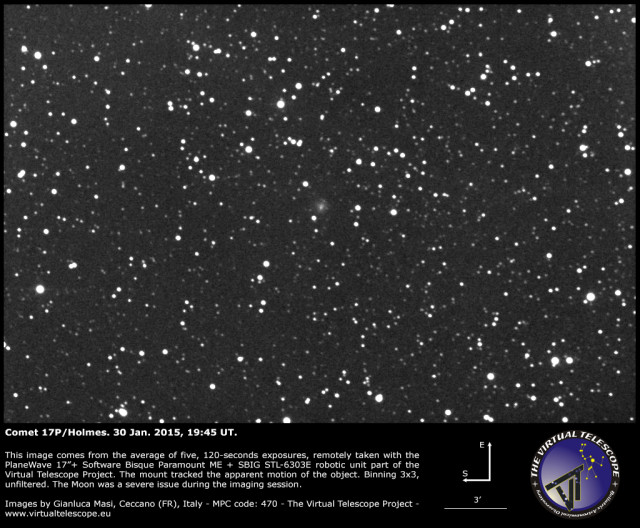 Comet 17P/Holmes is undergoing another outburst. This object is not new to similar “exploit”: when Edwin Holmes discovered it in 1892, the object was, indeed, in outburst.

In 2007 it had another large outburst, making it an amazing comet in a few days. At that time, one of the images collected via the Virtual Telescope was chosen as APOD by Nasa. So, this comet is used to amaze us with unexpected behavior.

A few days ago, on 26 Jan., comet Holmes started another outburst, 3.5/4.0 magnitudes large, apparently the largest since the great 2007 one. At Virtual Telescope, last night we were lucky enough to capture a few images during an unexpected break in the cloud coverage.

The image above comes from the average of five, 120-seconds unfiltered exposures, remotely collected with the  PlaneWave 17″+Paramount ME+SBIG STL-6303E robotic unit part of the Virtual Telescope Project. The telescope tracked at the apparent rate of the comet. The image scale is 1.8″/pixel. While the overall atmospheric conditions, plus the bright Moon were seriously unfavorable, the comet is pretty well visible.