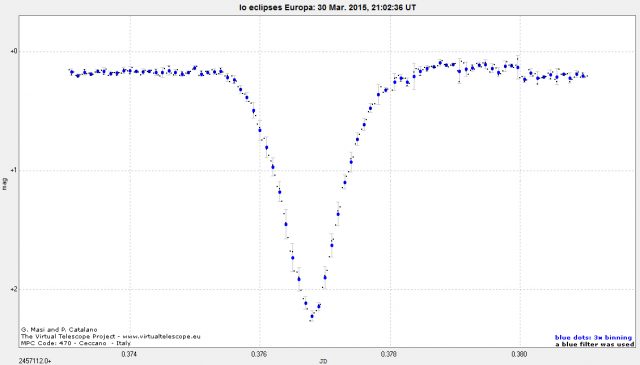 After the very successful coverage of the 11 Mar. 2015 mutual event, at Virtual Telescope we planned to cover another one happening among Jupiter’s satellites on 30 Mar. 2015, in order to contribute to the ongoin international campaign . This time, Io was eclipsing Europa.

At Virtual Telescope  we remotely used  the Celestron C14 + Paramount ME + SBIG ST8-XME robotic unit part of the Virtual Telescope. We started observing at 20:57 UT (the eclipses was expected to start at 21:00  to end at  21:05, both UT), stopping images at 21:09 UT. A total of 240 frames was obtained, each integrated for 1 second; a blue filter was used to limit the otherwise too strong brightness of Europa and Io.

The diagram above plots the relative brightness evolution of Europa (the eclipsed body) vs Io (the eclipsing object, used as reference star), making very apparent the eclipse itself: there was a drop of light of almost 2 full magnitudes. The lightcurve is very good, despite Europa was very close to the planet, with some contamination of the measurements. Also, seeing was bad.

Below is a video showing frames collected from to 20:58 to 21:08UT, where Europa is clearly seen falling in brightness and re brightening. The video also shows how the seeing was poor (strong wind).