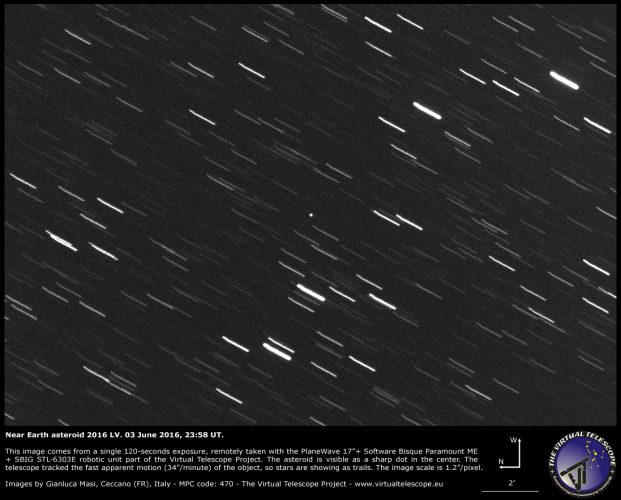 On 3 June 2016, at Virtual Telescope we performed some follow-up of a probable near-Earth asteroid, at that time listed on the Minor Planet Center’s NEO Confirmation Page, discovered by the Catalina Sky Survey. Later, its NEO nature was confirmed and the object received the provisional designation 2016 LV. Its diameter is estimated around 100 meters. On 1 June at 23:42 UT (before it was discovered) it reached the minimum distance of 1.4 millions of km from the Earth (more than 3.6 times the distance of the Moon).

The image above is a single 120-seconds exposure, remotely taken with PlaneWave 17″+Paramount ME+SBIG STL-6303E robotic unit part of the Virtual Telescope. The robotic mount tracked the  fast (34″/minute) apparent motion of the asteroid, so stars are trailing, while the asteroid is perfectly tracked (the minor planet is the  sharp dot in the center). At the imaging time, the object was at about mag. 15.0 and at about 2.2 millions km from our planet.