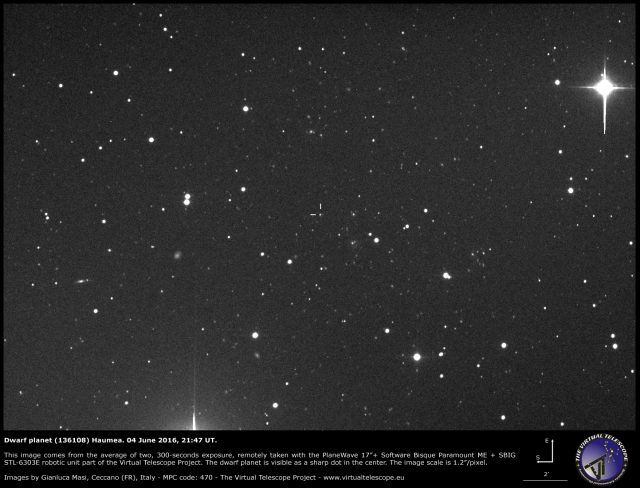 As you probably know, the International Astronomical Union, when demoting Pluto from the status of planet, introduced a new class of objects, called “dwarf planets”. To date, we count five of them: Among them, Pluto is the best known.

The small club includes (136108) Haumea, announced in 2005, when it raised a vivid controversy about the true discovery credits (one of the most intrigued and intriguing cases in modern science).

Above is the average of two, 300-seconds exposures, remotely taken with the PlaneWave 17″ + Paramount ME + SBIG STL-6303E robotic unit part of the Virtual Telescope. Images were unguided. Haumea is marked with two white lines.

It is amazing to see how all around there is a plethora of faint galaxies, with many of them suggesting groups/clusters. This part of the sky is placed in Bootes, far from the Milky Way pattern, so many galaxies are accessible.

You can also see a few more dwarf planets captured by the Virtual Telescope, Eris, Ceres and Pluto, as well as the famous Sedna.