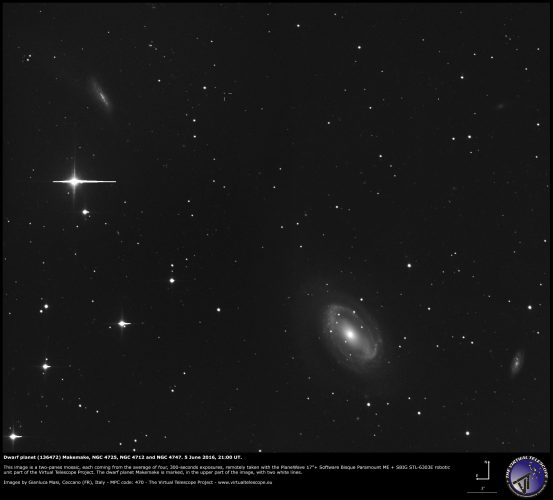 Inspired by the idea to capture images of those dwarf planets still missing in the Virtual Telescope Project’s archives and after having success with Haumea last night, we wanted to try with (136472) Makemake. Actually, we did it soon after Haumea, noting that on the border of the frame there was a small portion of a galaxy: while it was only marginally visible, it was clear it was a stunning one. A check revealed it was the amazing NGC 4725, having a few wonderful companions all around. So, we decided to wait for the next night, planning a mosaic to cover that stunning portion of the sky, making justice of it.

Above is a two-panes mosaic, each coming from the average of four, 300-seconds exposures, remotely taken with the PlaneWave 17″ + Paramount ME + SBIG STL-6303E robotic unit part of the Virtual Telescope. Images were unguided. (136472) Makemake is marked with two white lines, on the top of the image. NGC 4725 is the big galaxy on the bottom right, while on the extreme bottom right there is NGC 4712. On the upper left, not far from where Makemake is, there is NGC 4747. NGC 4725 is a Seyfert Galaxy, suggesting an active galactic nucleus containing a supermassive black hole; its distance is about 40 millions of light years.

This is one of the most impressive fields ever serendipitously imaged at Virtual Telescope. Having Makemake in this unique area makes the view a lifetime experience.

With this image of /136472) Makemake, the Virtual Telescope imaged all the dwarf planets known to date: Eris, Ceres , Pluto, Haumea and, here, Makemake. We also imaged the famous Sedna.