Asteroid (66458) Romaplanetario was discovered on 22 Aug. 1999 by Gianluca Masi, from his observatory in Ceccano, Italy, during a dedicated survey to look for new minor planets. At the discovery time, it received the provisional designation 1999 QV1: its official name was proposed by the discoverer to celebrate the Planetarium of Rome, once the object was numbered. It was accepted and made public by the International Astronomical Union in 2005. 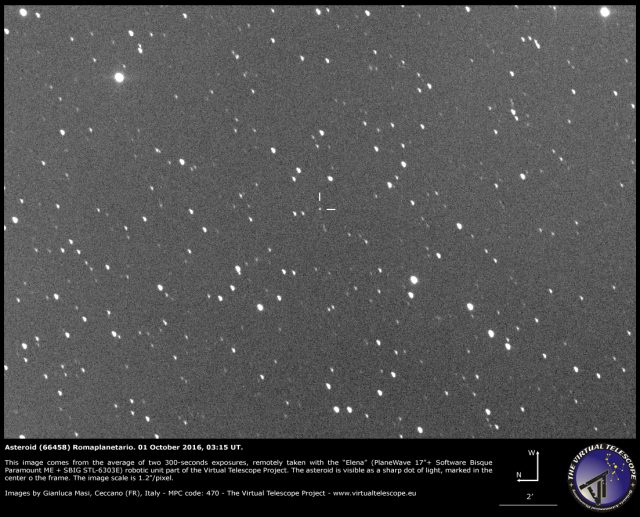 After 17 years from its first observation, (66458) Romaplanetario was observed again from the same discovery site. It was relatively bright and easy to find.

The image above comes from the average of three, 300-seconds exposures, remotely taken with the “Elena” (PlaneWave 17″+Paramount ME+SBIG STL-6303E) robotic unit. The telescope tracked the object, which is marked with two white lines, in the center of the frame.

Actually, in June 2015, the same robotic unit was used to see the asteroid, while it was much fainter and harder to find: it was a success to, as you can see from the image below, which is much deeper (much longer integration time). 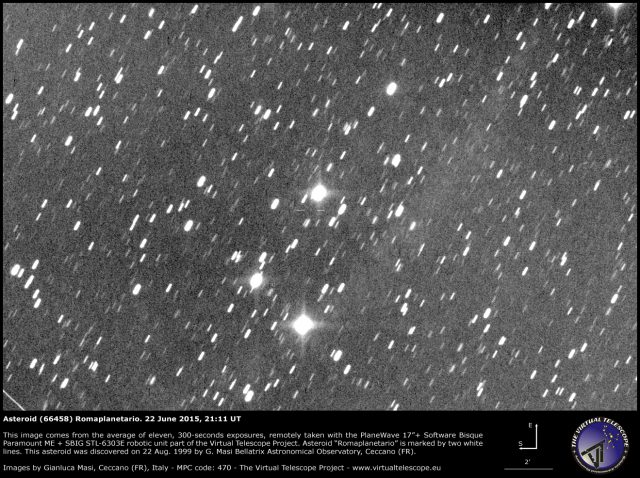 Asteroid (66458) Romaplanetario will be at opposition (best visibility) later this  year, November, so we will visit it again soon.