For sure, NGC 6946 is one of the most famous galaxies out there. Its beauty is one of the reasons, but there is another one: it hosted the largest number of supernova events ever detected. And its 10th supernova, SN 2017eaw, is shining there right now. 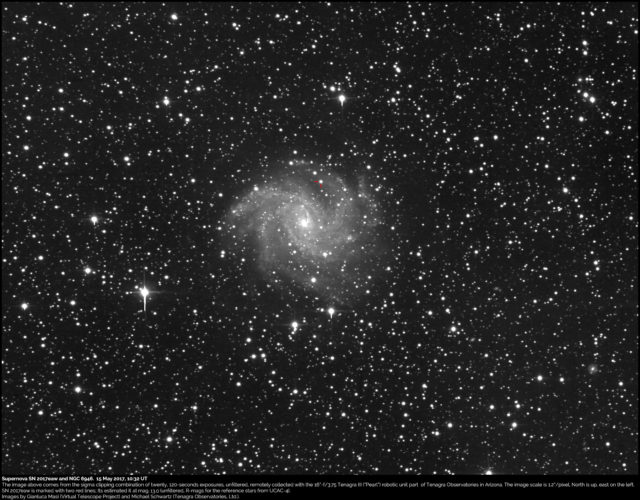 NGC 6946 is a mid-sized, intermediate spiral galaxy (sitting in between a ordinary spiral and a barred spiral) and contains about half of the number of stars we have in our Galaxy, with a diameter of about 40.000 light years. Located at about 20 millions of light years, it is visible in a region of the sky dominated by the trace of the Milky Way, this is why you see so many stars all around it.

NGC 6946 shows an amazing star formation rate (galaxies of this kind are called “Starburst” galaxies) and holds the record of the largest number of supernova events ever recorded: ten these explosions have been observed since 1917 and the 10th one, SN 2017eaw, was discovered exactly one century after the first one. The last supernova seen in our Galaxy dates back to 1604, before astronomers started using the telescope.

The image above comes from the sigma-clipping combinationa twenty, 120-seconds exposures, unfiltered, remotely taken with the 16″-f/3.75 Tenagra III (“Pearl”) robotic unit part of Tenagra Observatories in Arizona. The imaging camera is based on the KAF-16801 CCD. The resulting image scale is 1.2″/pixel. SN 2017eaw magnitude was estimated to be at mag. 13.0 (unfiltered, R-mags for the reference stars from UCAC-4).

Because this galaxy will be perfectly visible for many months, we will be able to intensively follow-up this explosion and make a nice light curve of it. We were lucky to find it soon after its explosion and we will try to do something like what we did with the legendary supernova SN 2011fe.