The Minor Planet Center has just announced the discovery, by the Mt. Lemmon Survey, of a small asteroid, 2017 TH5, which just had a very close, but safe, encounter with the Earth. Tenagra Observatories, with which we started an important cooperation, captured it and its observations contributed to determine its orbit. 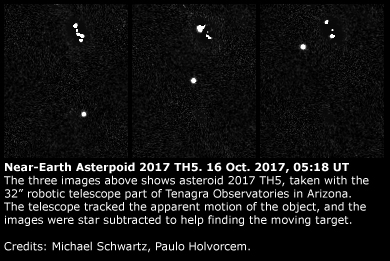 The images above were captured with the 32″, “Big Blue” robotic reflector available at Tenagra Observatories, as part of its work covered by the NASA grant #NNX15AE89G . Images were obtained and measured by Michael Schwartz and Paulo Holvorcem and were published on the discovery circular. We thank them for making the images available for us.

Tenagra Observatories, located in Arizona, is a leading facility doing very important follow-up of newly discovered NEOs, as well as recovery of those NEOs coming back for the 2nd time in the vicinity of the Earth, when picking them can be very challenging.  Its current work, which is unique in the world, is under a specific NASA grant.

Tenagra Observatories and the Virtual Telescope partnered for a new joint program to share the universe with the world.