Venus and the Pleiades met again up there at sunset, something happening from time to time. But it is always a unique sight and we are pleased to share with you some stunning photographs captured from Rome. With a very special bonus! 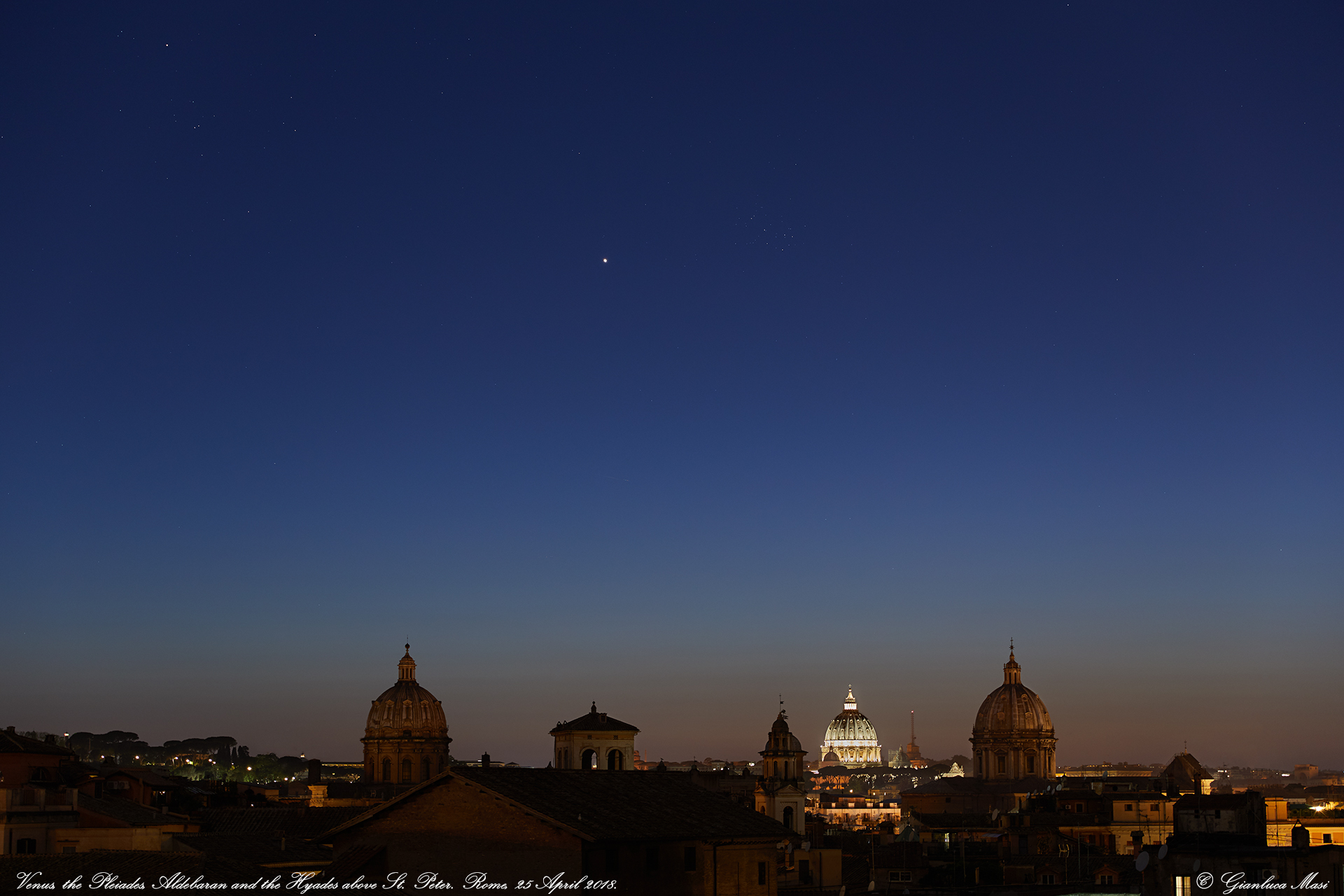 Venus is the brightest object in the sky, after the Sun and the Moon, of course. When it makes a conjunction with another stunning gem in the sky, you really cannot miss it.

These very evenings there is an ongoing meeting up there between Venus and the Pleiades, the famous star cluster in Taurus, one of the best known families of young stars in the sky. The current geometry makes these two objects visible just after sunset, at twilight, before they set. This affects the visibility of the Pleiades, as seeing them while the sky is still relatively bright is not straightforward. But I honestly love to spot the stars while the sky is still blue, before we enter the depths of the night. Considering the large difference in brightness of the two subjects, the result was not obvious, though.

I managed to enjoy this conjunction from Rome, having Venus setting behind St. Peter’s Dome: a skyline I’m never tired to celebrate. I decided to use two digital SLR bodies, working side by side, to exploit the beauty of this show at its best, without swapping cameras/lenses and loosing time. 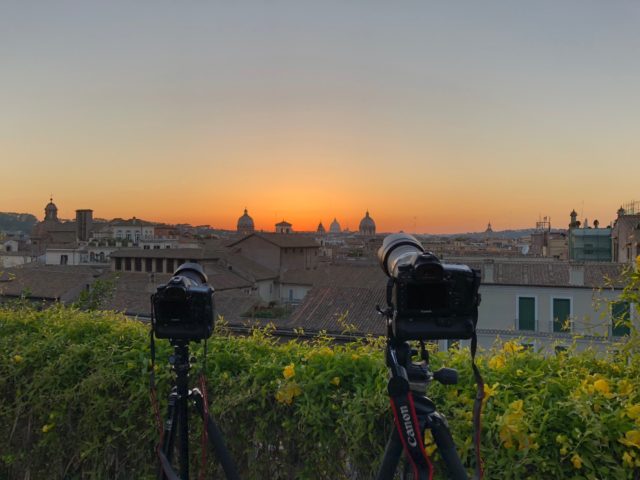 Tracking the Sun saying goodbye was stunning, too: our star left the horizon shining through a window of one of the precious architectures in Rome, something I managed to capture right away, with no time to make a careful composition. “Carpe diem” is the command we photographers obey more in these fast evolving circumstances! 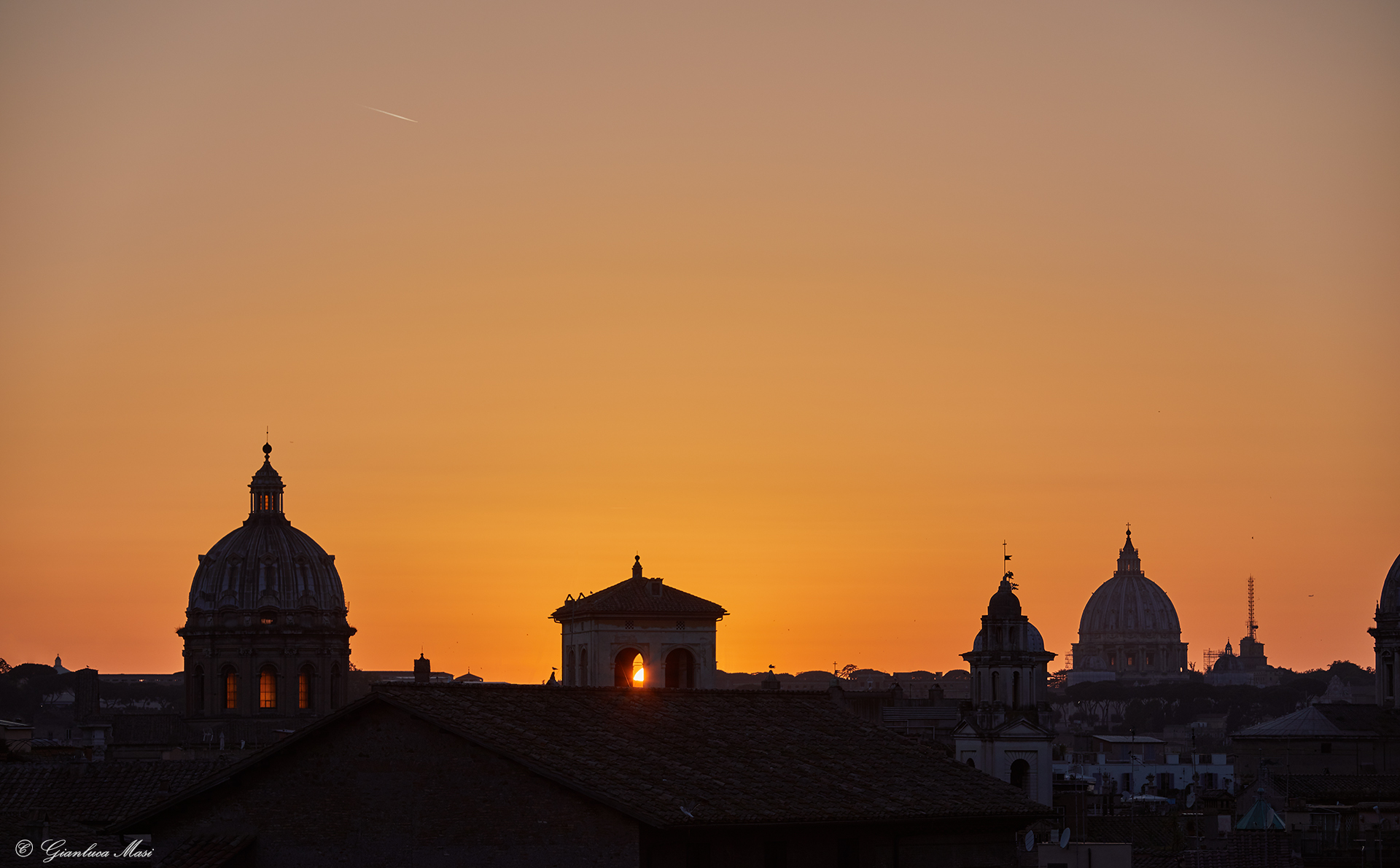 About 30 minutes after the Sun was gone, it was possible to see a long feature in our atmosphere, like a long shadow projecting up there. It could be the shadow of a mountain, possibly located in the Isola d’Elba Island. 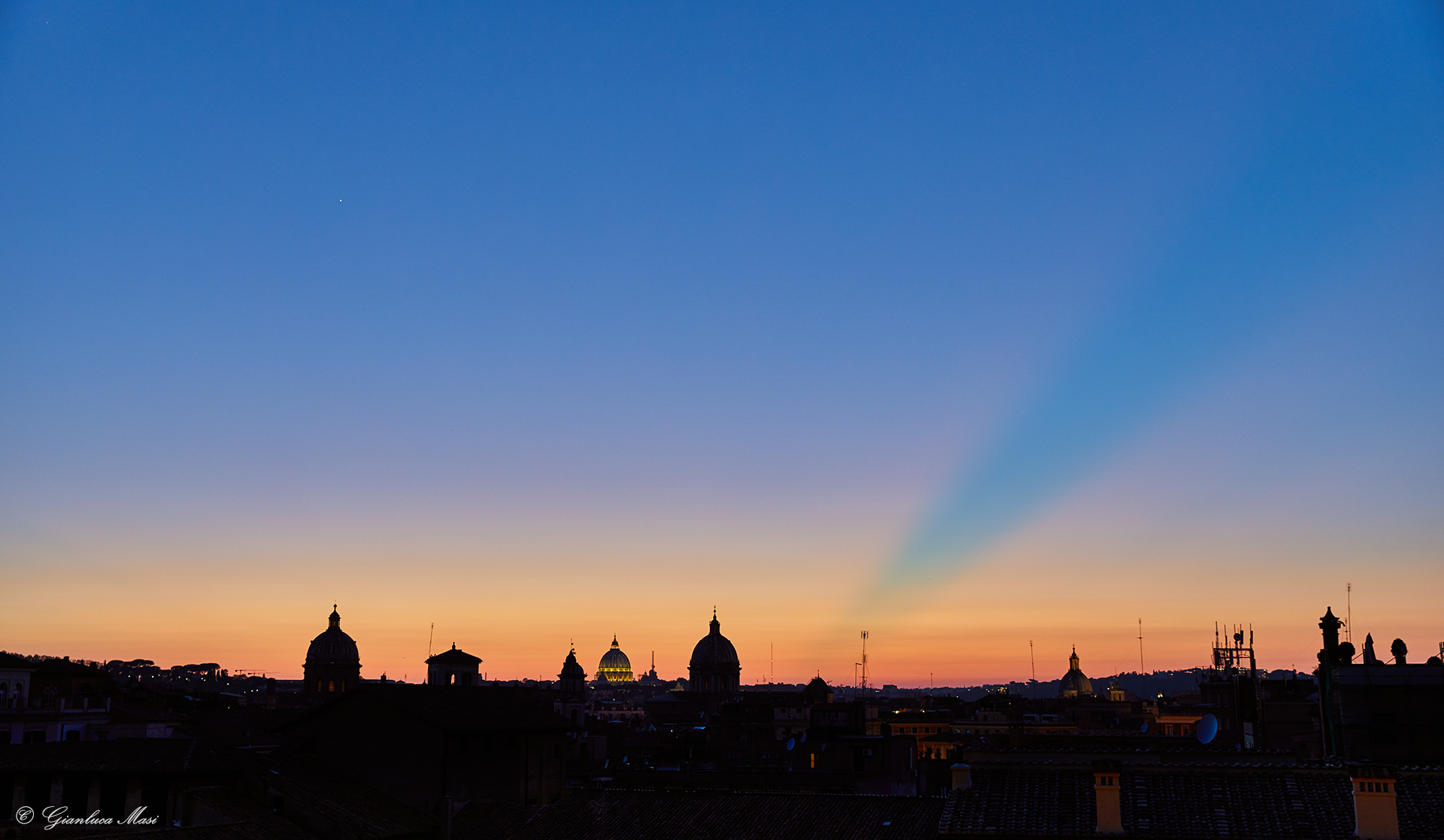 A long, ray-like feature projecting in the atmosphere

Using the longer lens I had available, I managed to get a close-up of planet Venus with the Pleiades: I really love, since my childhood, the shape of that star cluster, which I “discovered” when my father told me to look at the group of stars celebrated by the local tradition with the “Gallinelle” nickname. 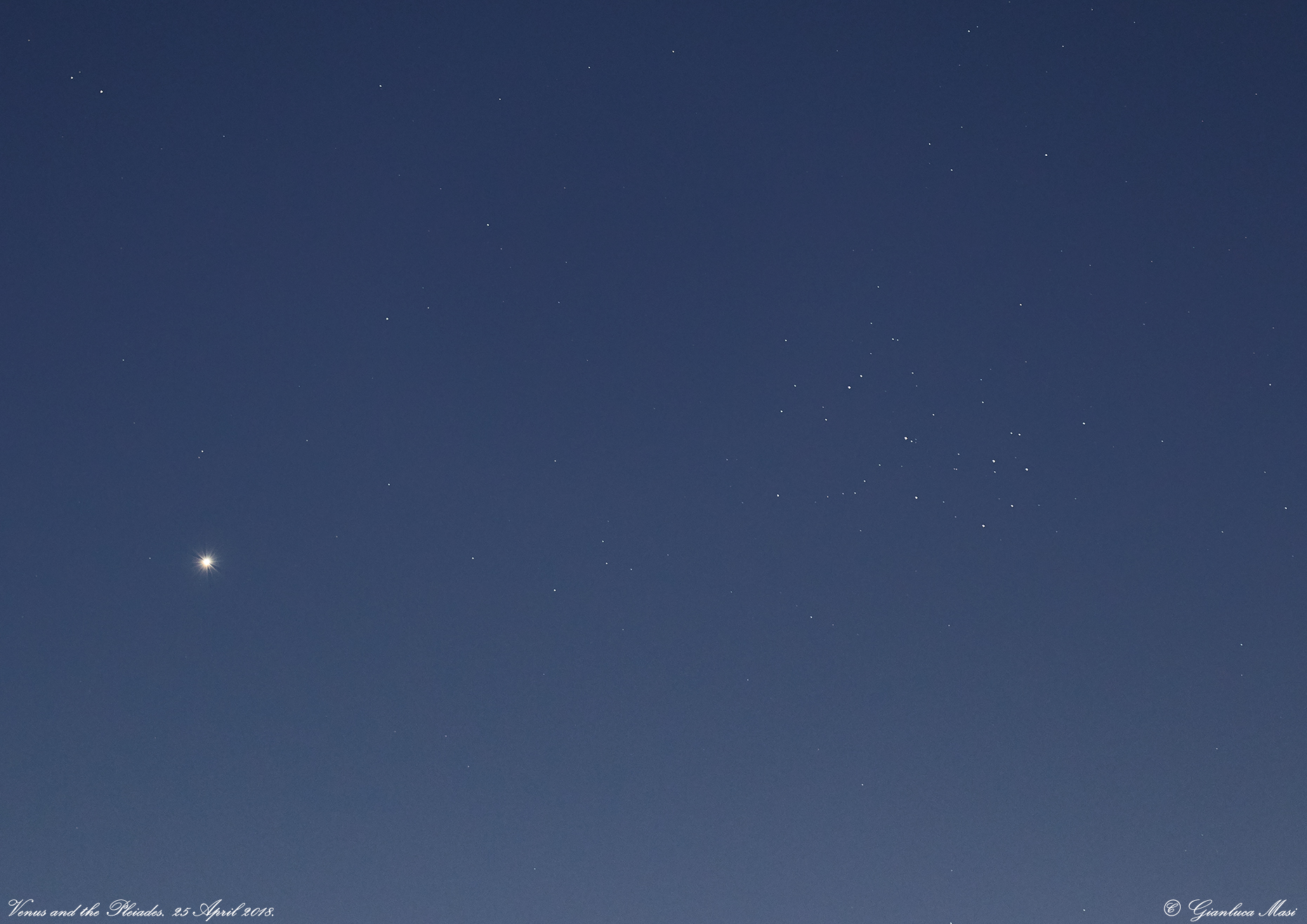 The whole winter sky was setting, actually: Here you can see part of the legendary Orion constellation entering the scene from the left, as well as part of Auriga and the whole Taurus figure. 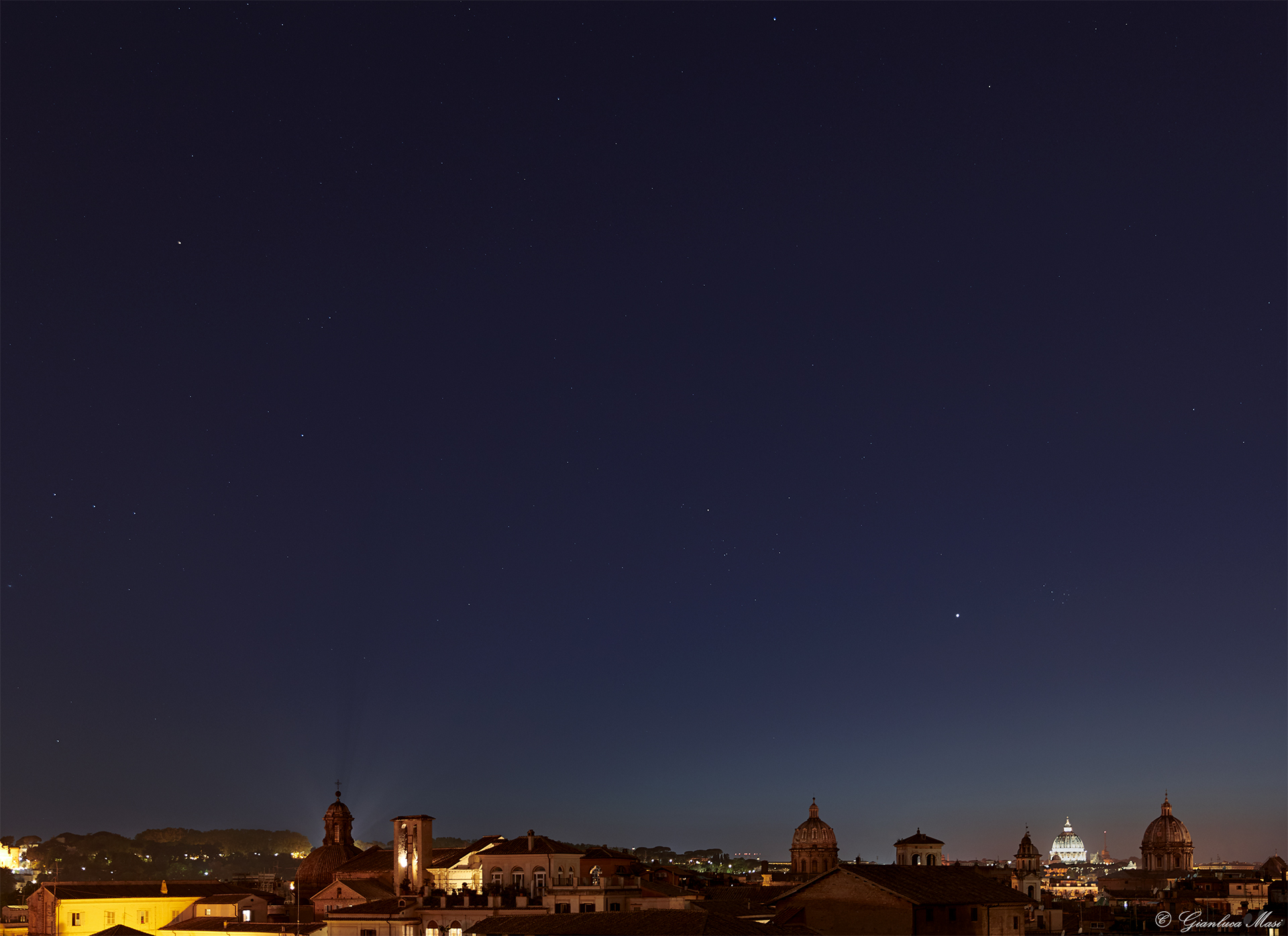 Part of the winter sky was following Venus at sunset

It was a very rewarding experience, as always. I will never stop telling that every time the sky offers us something like this, you will never be disappointed to look up. Be ready for the next big show!