This morning, I could really enjoy the wonderful planetary parade visible at dawn, plus the Moon. And a very special bonus were the transits of both the International Space Station and the Chinese Tianhe-1 one. All this above the glorious beauty of Rome. 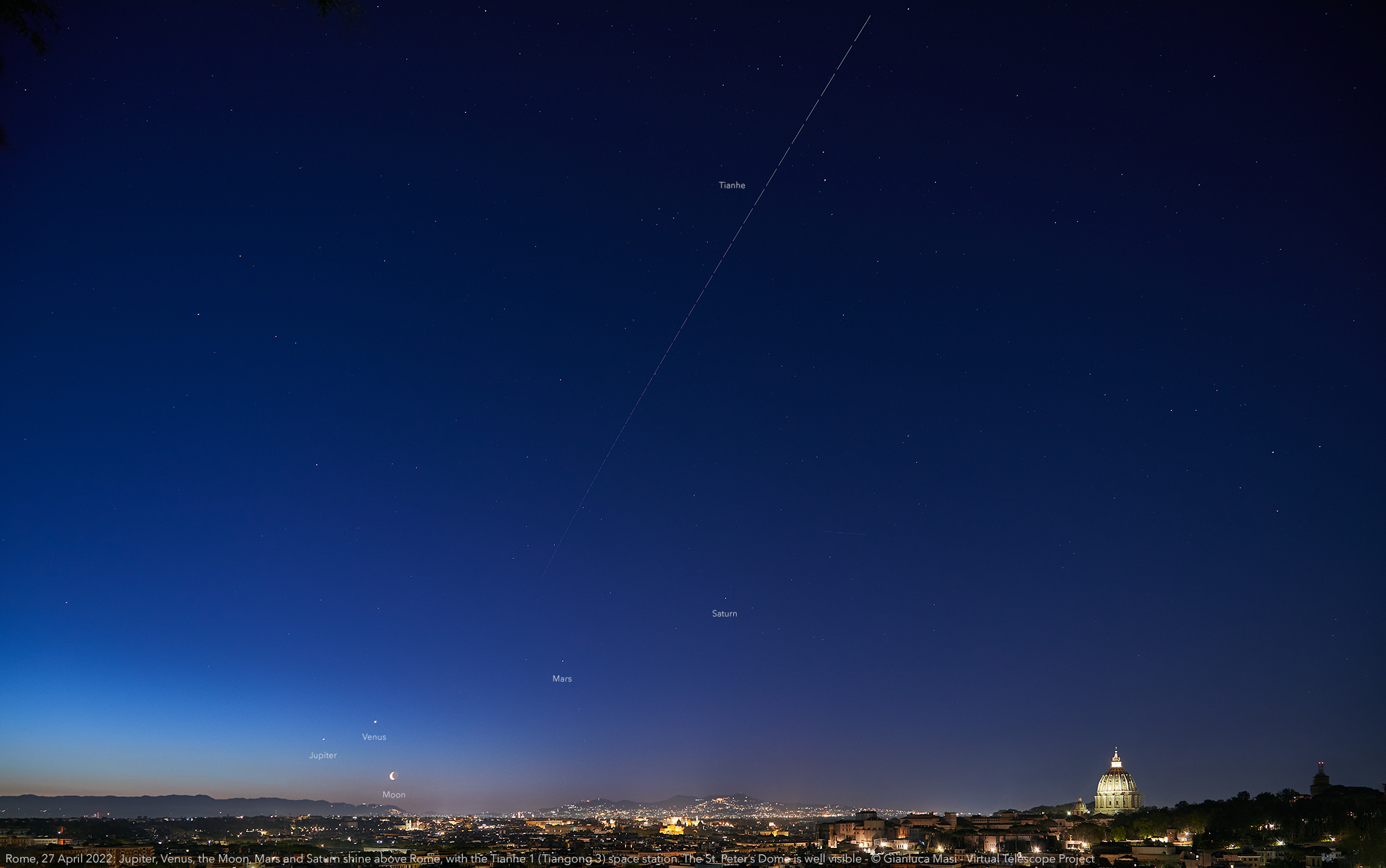 Planets Jupiter, Venus, Mars, Saturn and the Moon shine above Rome at dawn, while the Tianhe-1 Chinese space station crosses the sky. 27 Apr. 2022.

While looking at the night sky is always amazing, sometimes the experience exceeds our expectations.  This is exactly what happened to me this morning, when I left home at 04:00AM DST, jumping into the cool predawn air and reached one of my favourite scenic points in Rome. The reason? No less than four planets (Jupiter, Venus, Mars and Saturn) were waiting for me, with a sharp Moon crescent joining the show in the same spot of Jupiter and Venus (the brightest planets), hanging on the South-Eastern horizon minutes before sunrise. Rome (well, Vatican City) added the St. Peter’s  Dome, “signing” the view as one from the Eternal City. A lot of stuff! But there was much more.

I knew that both the International Space Station (ISS) and the Tianhe-1 Chinese one were crossing the sky within 15 minutes, partially involving the same region of the sky with the planets.

With all these things going to happen, selecting my imaging devices was not easy. I ended-up bringing with me two Canon 5D mIV DSLR bodies, two tripods and two very different lenses: a wide field Canon EF 16-35mm f/4L IS USM and a Canon EF 70-200mm f/2.8L IS II USM. The former to capture the entire planetary parade plus Rome, the latter to capture the Jupiter, Venus and Moon meeting.

I was particularly happy to see the ISS: in a few hours our Samantha Cristoforetti (ESA astronaut) will be arriving on the Station for her second time. The pass of the ISS was not the best possible to fit with the four planets. I managed to capture a fragment of the transit and I’m very happy with it. Here it is: 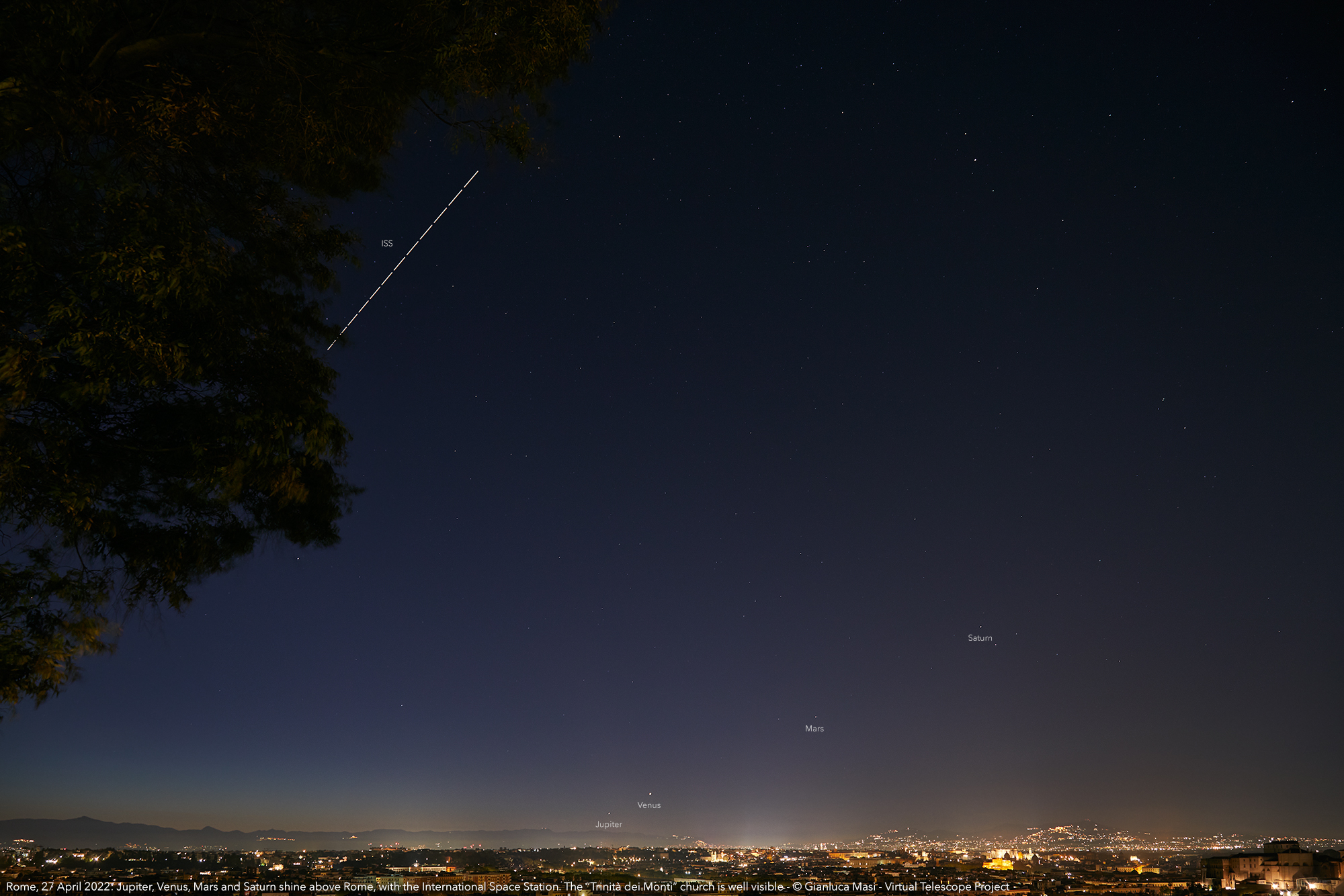 Planets Jupiter, Venus, Mars and Saturn shine with the International Space Station above Rome in the predawn hours. 27 Apr. 2022.

It is amazing to see how the line marked by the four planets is showing the ecliptic, the apparent path of the Sun across the stars, that is the projected orbit of the Earth in the sky.

About 15 minutes later, it was the Chinese Tianhe-1 Station to show and it “drove”to the planetary parade, while fading. The image is at the beginning of this post, but for your convenience, here it is again:

Planets Jupiter, Venus, Mars, Saturn and the Moon shine above Rome at dawn, while the Tianhe-1 Chinese space station crosses the sky. 27 Apr. 2022.

A number of glorious monuments are visible: the St. Peter’s Dome, Sant’Angelo Castle and Trinità dei Monti, to say the least. I managed to label each astronomical object there.

Finally, it was time for me to concentrate on the “Jupiter, Venus and Moon” meeting, enriched by the very unique colours of the dawn. Below is one of the most spectacular images, with the famous “Trinità dei Monti” (dominating the Spanish Steps from the above) church very well visible: 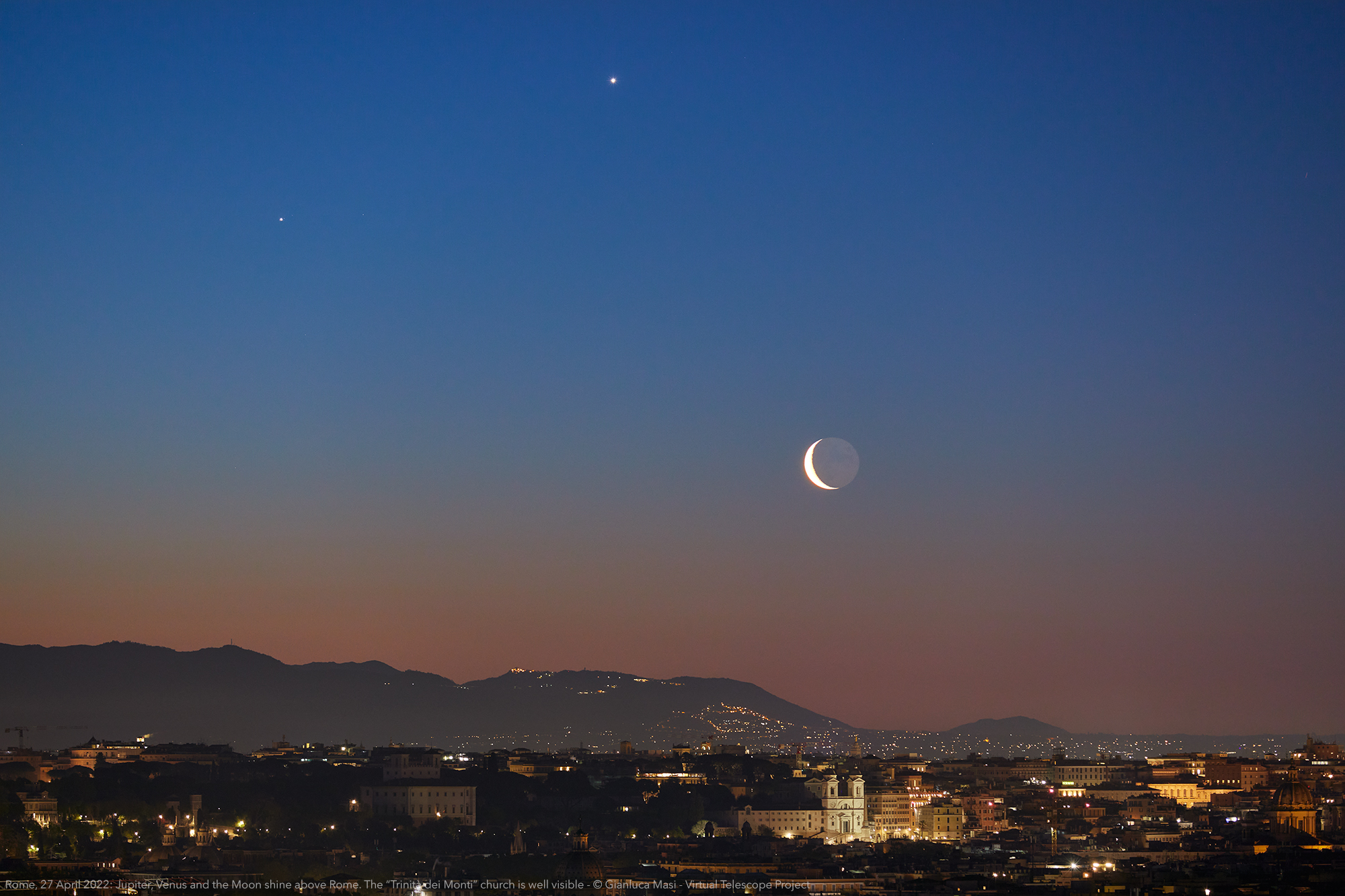 Venus and Jupiter meet the Moon above Rome. On the bottom, the “Trinità dei Monti” church. 27 Apr. 2022.

I hope you enjoyed these views, too, but find your time and go out there at dawn and experiment this personally!