Amazing: this is what I can say after the stunning show of the Perseids 2018, as we enjoyed it from Castel Santa Maria, in the province of Perugia, Italy, under very dark skies. We saw a lot of shooting stars and our live feed reached tens of thousands of people around the planet, while supporting the local community in their project to restore the ancient church of “Madonna della Neve” (XVI Century). This event served as a bright example of astro-tourism, too. 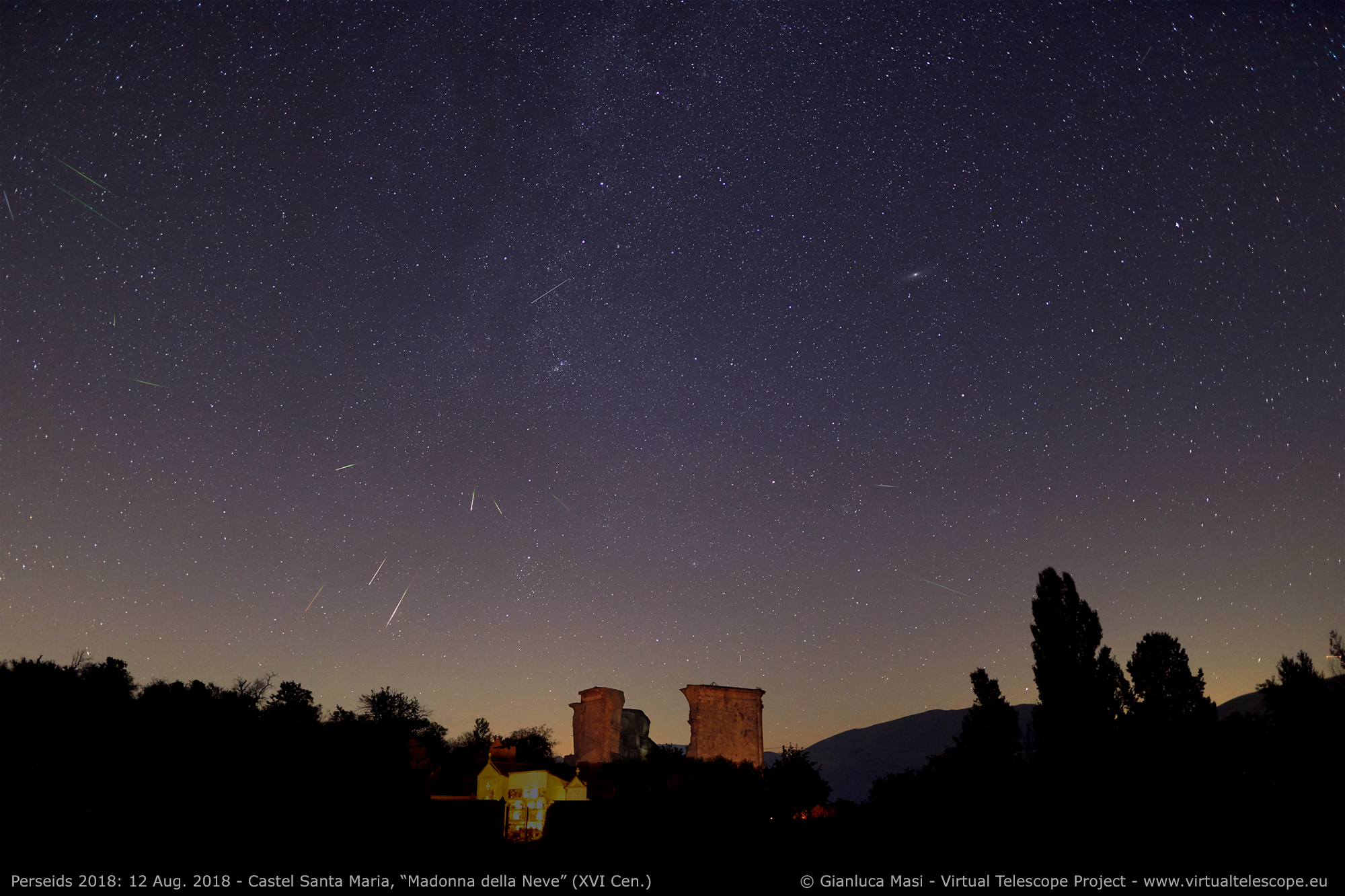 A number of bright, greenish Perseids crossed the sky above the ruins of the church of ” Madonna della Neve” (XVI Century) in Castel Santa Maria (PG), Italy. 12 Aug. 2018.

This year the Perseid meteor shower promised a lot, mainly because it was going to put its show under excellent skies conditions: the Moon was new, so with no light interference from our natural satellite. Of course, as done over the past years, the Virtual Telescope Project was going to share this meteor shower live, online. And we wanted to exploit this precious Moon-free sky at its best.

But we desired to do more. We wanted to support the amazing project to rebuild an ancient, very precious church in Central Italy, carried out by the local community of Castel Santa Maria, close to Norcia and Cascia and not far from Perugia, which town went completely destroyed in the 1979 earthquake. That serious natural event almost completely destroyed the XVI Century church of “Madonna della Neve“, which surviving ruins were further damaged by the recent 2016 earthquake, to the point the ruins and the art inside cannot be accessed anymore. The local community is now working to gain the right attention on the critical conditions of the church’s leftovers, which must be preserved for their unique artistic value.

So, we decided to go there, with the idea to include the church’s ruins in our images capturing the Perseids 2018 show. Once there, I discovered a simply wonderful natural place, with very blue skies and breath-taking landscapes.

The panorama as seen from the area beside the “Madonna della Neve” ruins.

I could discover the ancient history of the place and the “Madonna della Neve” church, admiring the surviving XVI Century frescoes, which are literally going to disappear soon, if the proper authorities will not take care of them, as well as of the other ruins. Looking at them closely, it was a touching experience. 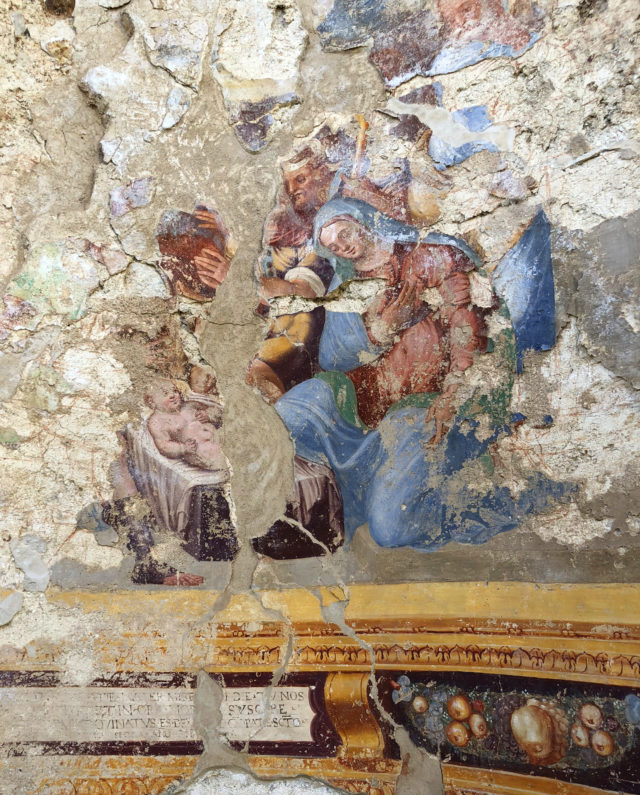 Needless to say, the place was simply perfect for observing the upcoming peak of the Perseids: the valley provided a complete view of the sky, assuring the desired darkness to see as much meteors as possible. I selected the right spot for setting up  my imaging hardware: I wanted to cover the region of the sky hosting the Perseid’s radiant, in Perseus constellation, also including the ruins of the church. Luckily, I could find the place from where the radiant was just above the church, offering an honestly stunning view. 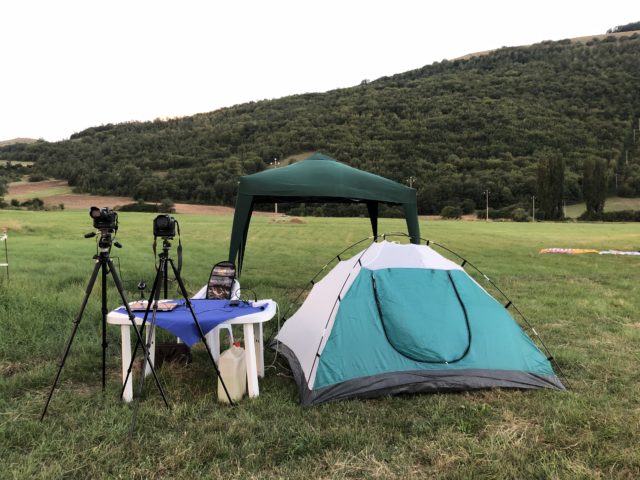 The imaging setup is up and waiting for the night

Imaging meteors is not straightforward. They are fast, generally faint and you really do not know where they will cross the sky. That said, you must optimize your chances. As for their fast motion and relatively faint brightness, you can use very high luminosity lenses (f/2 or faster), while to capture many of them, a large field of view would be in principle very desirable. But the shorter the focal length (wide field lens), the smaller the aperture of the lens, so the lesser the amount of light you are gathering. In short: if you use a very wide, even if fast lens, you see just a few meteors, because that lens collect just a little light. 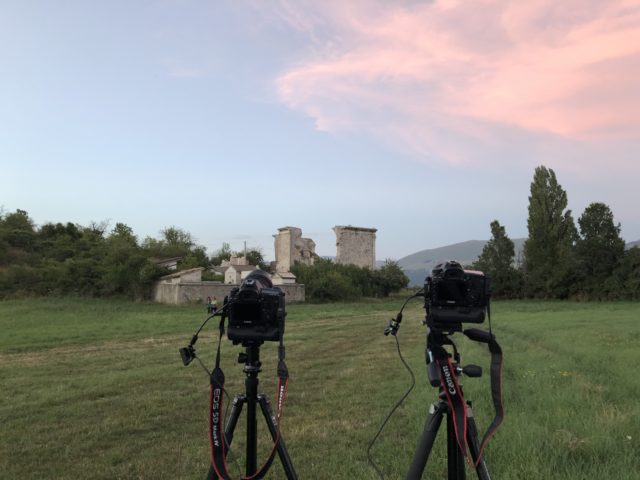 I did some calculations, ending up with some results which drove my choice: I selected two fast lenses: a 35mm-f/1.4 and a 24mm-f/1.4, to be used with my two Canon 5DmIV DSLR bodies. Of course, two sturdy tripods were used, too. 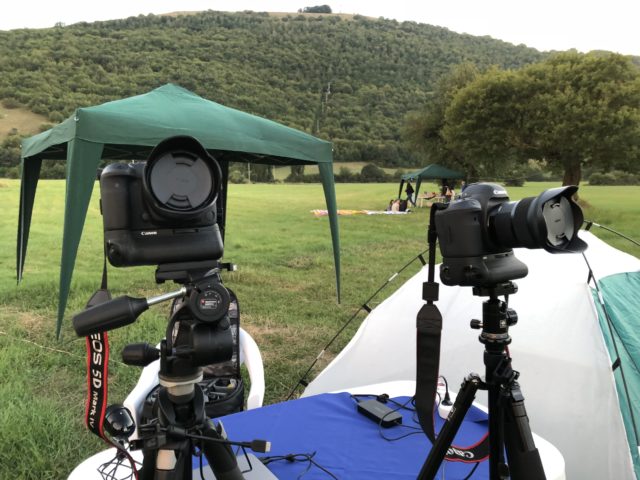 The cameras are ready

The local “Pro Loco” community invited people to join us, while we were going to stream our imaging session live, over the internet. So, this event was going to be a perfect example of astro-tourism, too. A number of people reached us there and we could enjoy the dusk, with very nice skies promising a wonderful starry night. 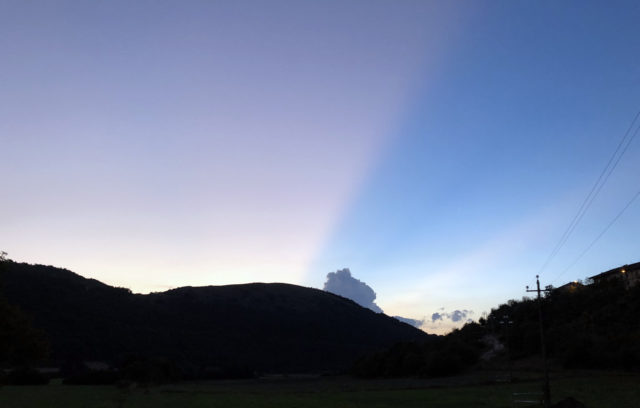 The evening started with some poems read under the stars, after we were properly introduced to the history of the place and the mission of the project I mentioned above. Looking at the ruins of “Madonna della Neve” under the light of the stars, with the adjacent very small cemetery, was quite an experience. We also saw Mars, with its intense red light rising across the threes, which made everyone happy to be there.

Then, I guided a quick sky tour by naked-eye, under one of the best skies I have seen in Italy. The Milky Way was incredibly bright, crossing the entire sky from Perseus to Sagittarius. Vega, Altair and Deneb were true diamonds overhead. Of course, I could tell what Perseids are, while they were already offering a nice show, with many “WOW!” from all the people we had there.

Then, I started the live feed, reaching about 50,000 viewers around the planet and showing them several very nice meteors! The imaging setup really did a great work: the fast lenses I selected captured many Perseids and I could create the image at the beginning of this post, showing the brightest ones I captures, above the ruins of “Madonna della Neve” church. The radiant was not far from the center of the image, so the meteor streaks are coming from there, with a nice aesthetic effect, I think. 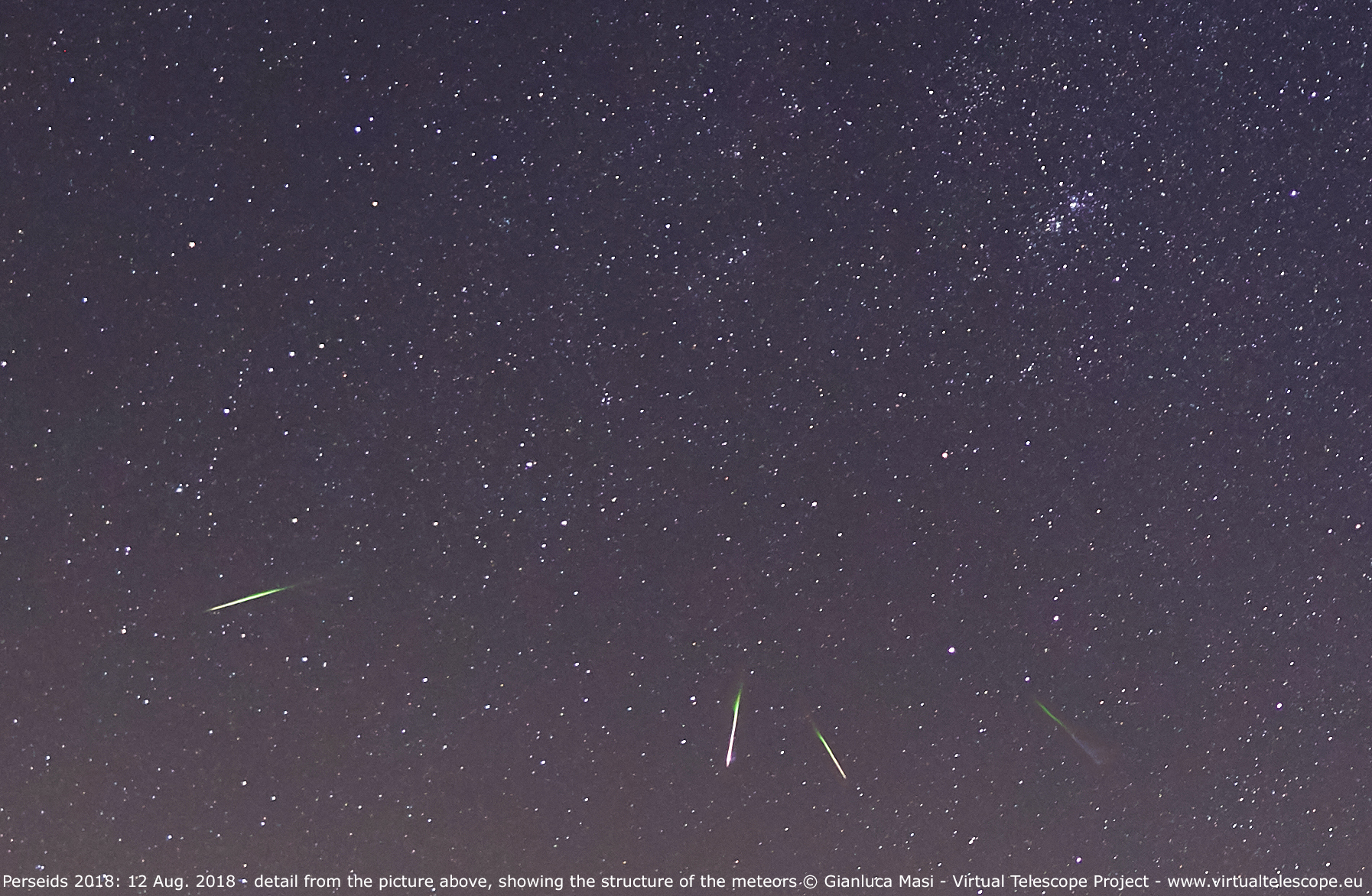 A close-up, showing the structure of the meteor streaks

The image above shows the meteor streaks in some details, with their very beautiful colors: on the upper right, you can see the famous “Double Cluster” in Perseus, not far from the radiant, the point from where the meteors trail are apparently coming.

Below you can find the podcast of our live feed.

It was hard, at the end, to close the live feed and say good bye to such a wonderful sky. But we were happy, everyone was happy to be there. Hopefully, the stars and the show we could bring to the world from there will support the cause the local community is carrying on, to preserve the “Madonna della Neve” precious legacy.

Last but not least, our event was an excellent example of astro-tourism and the pristine skies of the area can be really a good reason to bring people there, together with the immense historic and cultural heritage of the region.