The Solar System walks down the starry catwalk above Rome – 17 Aug. 2018

These nights, four planets plus the Moon are visible at sunset: Venus, Jupiter, Mars and Saturn plot the Zodiacal avenue up there, with our satellite joining the parade.

Venus, Jupiter, Saturn and Mars along the Zodiacal avenue, with the Moon, above Rome. 17 Aug. 2018

Seeing four planets or more at a glance is not straightforward, especially if you want them well-spaced along the Zodiac. Well, it also happens you can see all the five, naked-eye planets above the horizon at the same time, but even four is not that bad. And this is happening right now, up there.

Venus, Jupiter, Saturn and Mars are visible soon after sunset, with a waxing Moon visiting all of them, night after night. Sorry, Mercury: we miss you! Mars had its great opposition at the end of July, so it is still very bright, making the parade amazing. I have always been attracted by these celestial happenings, offering a clue to our Solar System, so I could not resist to capture this new one, of course adding the urban panorama of Rome, the Eternal City, with its legendary monuments.

Considering the distance between the most extreme planets of the parade (Venus and Mars) was of more than 100 degrees, capturing the entire group required an extremely wide field lens or a photostiching. The latter is very easy to handle, thanks to a huge array of software for this common post-production operation. But I preferred to go with a wide field lens, having such a very beautiful optics part of my imaging gear: the venerable Canon EF 11-24mm f/4L USM, the world’s widest angle rectilinear lens providing full frame 35mm image sensor coverage.

Considering the distribution of the four planets up there, I selected my location accordingly, the famous “Pincio” (Pincial Hill) in Rome, from where the sunset above the city is always breathtaking and your sight can span from WNW to SE quite easily. I went there soon after sunset, setting up my tripod, one of my Canon 5D mark IV DSLR bodies and the lens above. 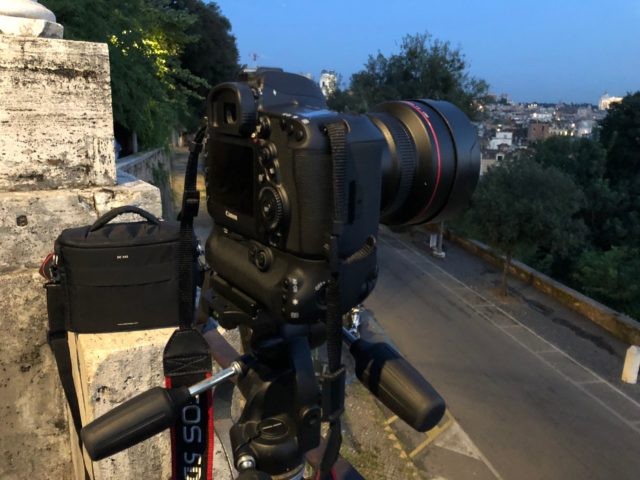 The imaging hardware ready to go

Venus and Mars, plus Jupiter and of course the Moon, were obvious to see soon after sunset, while it took a bit more time for Saturn to show. At the point, several bright stars were visible all around and I decided it was time for me to image. I love when I can record the stars with a still light-blue sky, bringing the idea of the twilight to the observer.

I must admit I’m very happy with the results shown above. There, you can see the St. Peter’s dome, the “Santi Ambrogio e Carlo al Corso” Basilica, the “All Saints’ Anglican Church” and more. Plus the four planets and the Moon, of course! Add the Earth on the bottom and you almost see the entire, historic Solar System.

I wanted to show the constellations and the main stars in the image, so I added some lines and captions on it. I hope you like it, but above all: go out and look at the Solar System yourself!

Looking forward to the next “Earth & Sky” meeting!

All images are © Gianluca Masi – Virtual Telescope Project – Up and Down the Horizon and cannot be used without permission.