More than three years after our last published image of Nova Delphini 2013, aka as V339 Del, we are pleased to share this new one, captured early in Sept. 2018. 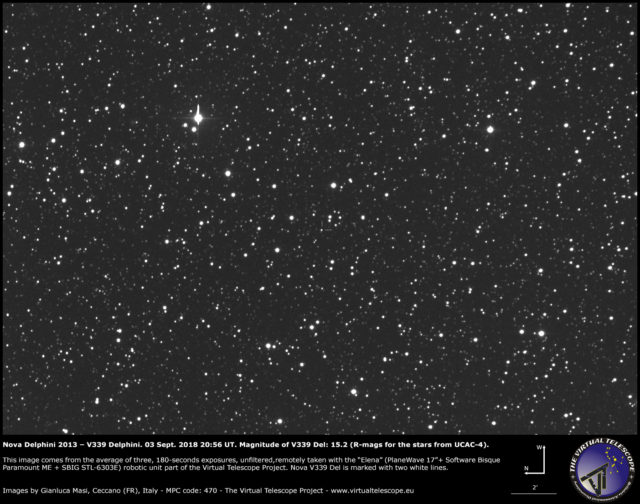 The image above comes from the average of three, 180-seconds exposures, unfiltered, remotely collected with the “Elena” (PlaneWave 17″+Paramount ME+SBIG STL-6303E) robotic unit part of the Virtual Telescope Project. V339 Del was estimated to be at mag. 15.2 (using R mags for the reference stars from UCAC 4), that is about two magnitudes fainter than 19 May 2015. V339 Del is in the center of the picture.

It is worth to mention that we did a very extensive observing campaign of this nova, which was actually classified as a nova thanks to our spectroscopic observations at its discovery time (Aug. 2013). It has been one of the brightest galactic novae in recent history. Its magnitude in R at quiescence should be around 16.8.