A bright supernova, SN 2018ivc, has been discovered in the peculiar galaxy Messier 77, close to its nucleus on 24 Nov. and, after a long period of cloudy/rainy weather, we could capture it. Here it is our image. 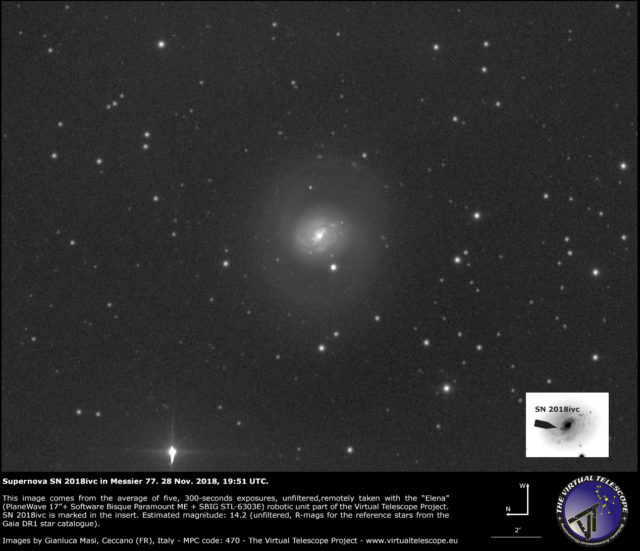 The image above comes from the average of five, 300-seconds exposures, unfiltered, remotely taken with “Elena” (PlaneWave 17″+Paramount ME+SBIG STL-6303E) robotic unit available at Virtual Telescope. SN 2018ivc is marked with an arrow in the insert: it was discovered by the DLT40 survey. Spectroscopy showed it to be a type II supernova. We estimated it as bright as mag. 14.2 (unfiltered, R-mags for the reference stars from the Gaia DR1 star catalogue).

Messier 77 was discovered by Pierre Méchain in 1780 and it is a peculiar galaxy in the constellation of Cetus, the Whale. Located at about 50 millions of light years, it is also known as Cetus A. It is a barred spiral galaxy classified as hosting an Active Galactic Nucleus (AGN). Around its bright core there is a very faint region, showing a larger structure.

Messier 77 is the prototype of the Sayfert galaxies, being the brightest one up there. These galaxies are of great importance: they have a quasar-like nucleus, but the galactic structure is well visible.

We plan to follow the evolution of this supernova, so stay tuned!

Back to the “supernovae” page