Mars and Neptune meet in the sky: an image of a stunning conjunction – 7 Dec. 2018

On 7 Dec. 2018, planets Mars and Neptune had a very close conjunction, coming closer than 2 arcminutes. A few hours later, we could image them, also grabbing Triton, the largest satellite of Neptune. Here it is our image. 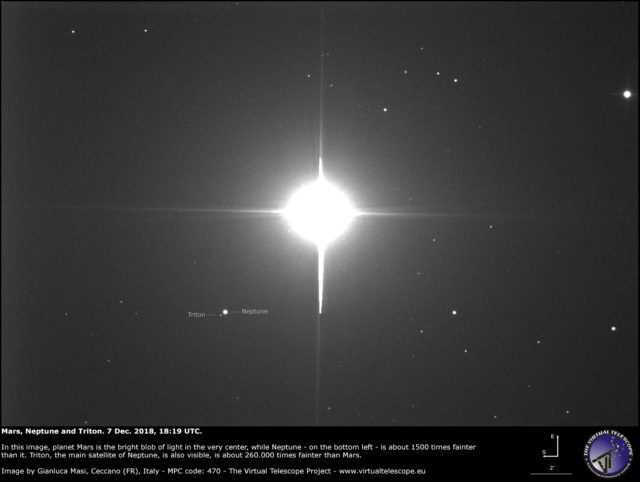 The image above is a single 2-seconds exposure, unfiltered, remotely collected with the “Elena” (PlaneWave 17″+Paramount ME+SBIG STL-6303E) robotic unit available at the Virtual Telescope Project. The image scale is 1.2″/pixel.

In the very center, Mars, shining at about magnitude 0, resulted in a huge blob of light, also showing the typical blooming effect, due to the light flooding the silicon sensor. The planet was at about 150 millions of km from us. Neptune, at magnitude 7.9, was about 7 arc-minutes SW, but at about 4.5 billions of km from us. On the image, you can also see the largest satellite of Neptune, named Triton, shining at magnitude 13.5.

Back to Solar System page