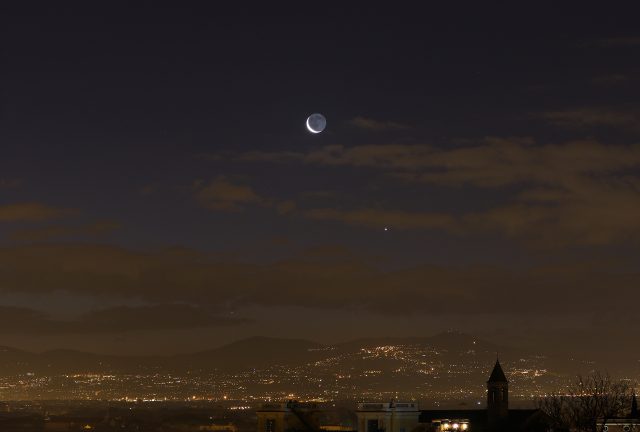 A sharp crescent Moon, Venus and Mercury are hanging above the Roman Castles, as seen from Gianicolo, in Rome. 6 Feb. 2016

These mornings, as you know, there is a stunning show up in the sky: all the five, naked-eye planets are visible at a glance. Add the Moon and the Earth on the foreground and you will have enough reasons to wake up earlier than the Sun to admire them in person.

At Virtual Telescope we managed to grab them a couple of mornings, but on 6 Feb. we wanted to go out early once again: that morning a very sharp crescent Moon was expected in close conjunction with Venus and Mercury, within five degrees, just above the horizon. These are very spectacular events, as the Moon, not far from ending its monthly cycle, shows an amazing Earthshine, for a truly unforgettable vision.

I decided to  reach the  “Gianicolo” (Janiculum) hill in Rome, as I was sure the sight could be great. Once on the way to my site, I noticed there were lots of clouds all around, so a not promising scenery. Once at Gianicolo, I quickly made my setup ready. This time, I had with me both by Canon 7D mark II bodies, equipped with a Canon EF-S 17-55mm f/2.8 IS USM and the venerable Canon EF 70-200mm f/2.8 L IS II USM: this way, I could go without swapping the optics, saving a lot of time.

At the beginning, as I said, there were just a few hopes, the clouds were sitting in the very same direction where I had to see for the show. 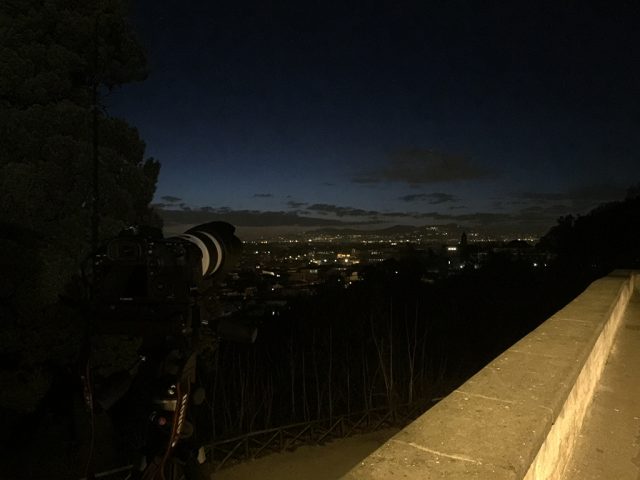 The imaging setup is ready, but clouds are too.

Luckily, some cold wind was blowing and clouds were soon gone, with the Moon finally promising an unforgettable vision through my 200mm-f/2.8 lens. 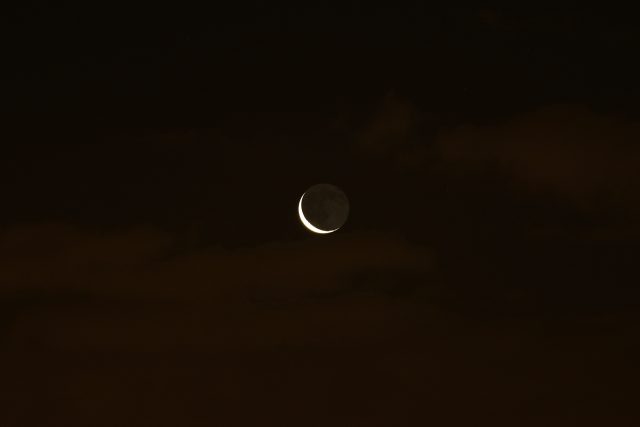 In a few minutes, all the three objects, Venus, Mercury and the Moon, were visible and I captured them with the 70mm-f/2.8: 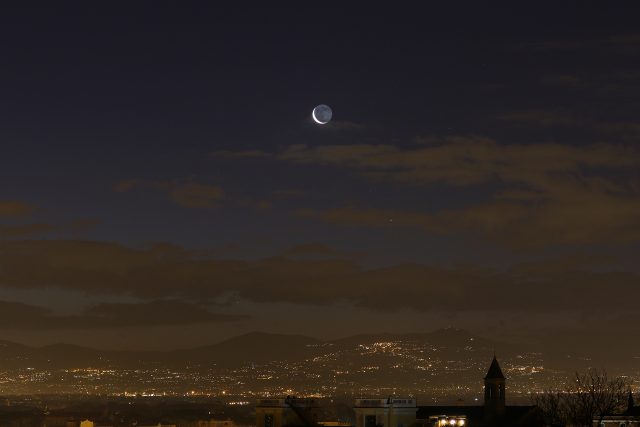 The crescent Moon, Venus and Mercury are finally showing

At this point, I started swapping the cameras, to get even a larger field of view, as with the 55mm-f/2.8 lens which provided a perfect framing of the scene. 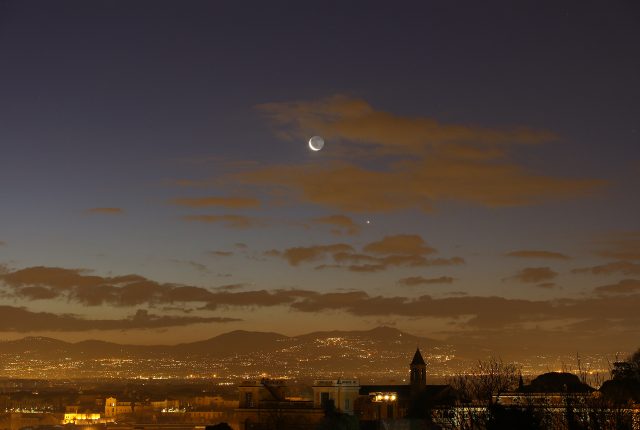 The Moon, Venus and Mercury as seen in a larger field of view

Time flies when you are having fun: the sky was brightening fast, providing a continuously evolving (and very beautiful) light. Of course, I did not miss the sight with my very own eyes: while I love imaging these cosmic treasures, I really like to see them in the “ancient” way. Sometimes, I have to be careful to come back from that vision and continue taking images! So, I went back to the 70mm lens. 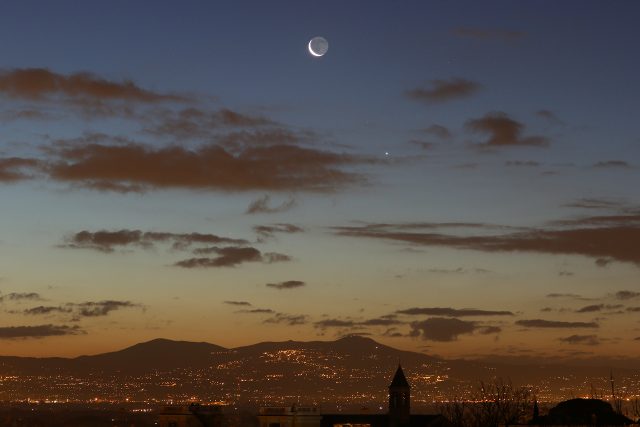 While the sky gets brighter, the view is continuously new and rewarding.

Soon, it was time to leave. I managed to capture another view with the 55mm lens, with the city of Frascati and the beautiful Roman Castles just below the starry event. 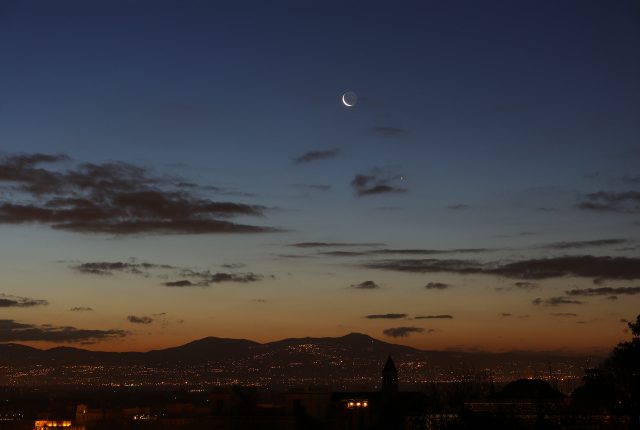 A final capture before to leave the observing site. The elegance of the sky at dawn is always breathtaking

Oh, I could not resist and used my 70-200 zoom at its 200mm focal length for the next image, taking the Moon, Venus… and an airplane, too! 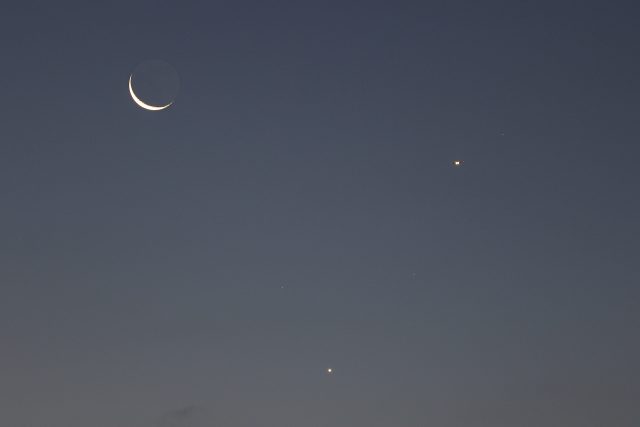 A close-up with the Moon, Venus and an airplane

Well, it was not finished. While driving back to home, I crossed the Tevere river on its “Ponte Mazzini” (“Mazzini Bridge”) and looking SE I spotted the Moon and Venus above the water. I stopped my car, grabbed my camera and went to the side of the bridge facing them, capturing another image, this time saying good bye to the sky. 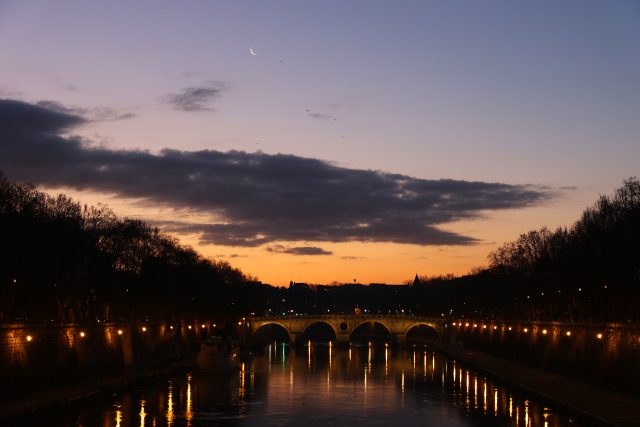 The Moon and Venus are shining at dawn above the colorful waters of the Tevere river, in Rome

Needless to say, I’m already looking forward to the next cosmic delight.