When the Moon, Mercury and Mars meet above Rome… the show is guaranteed! – 5 June 2019

These evenings, planet Mercury is back at sunset, peaking at magnitude -1 or so. The young Moon and Mars added their beauty last night, so I managed to capture a few images. With the special bonus of Rome, this time with its astronomical observatory, in Monte Mario. 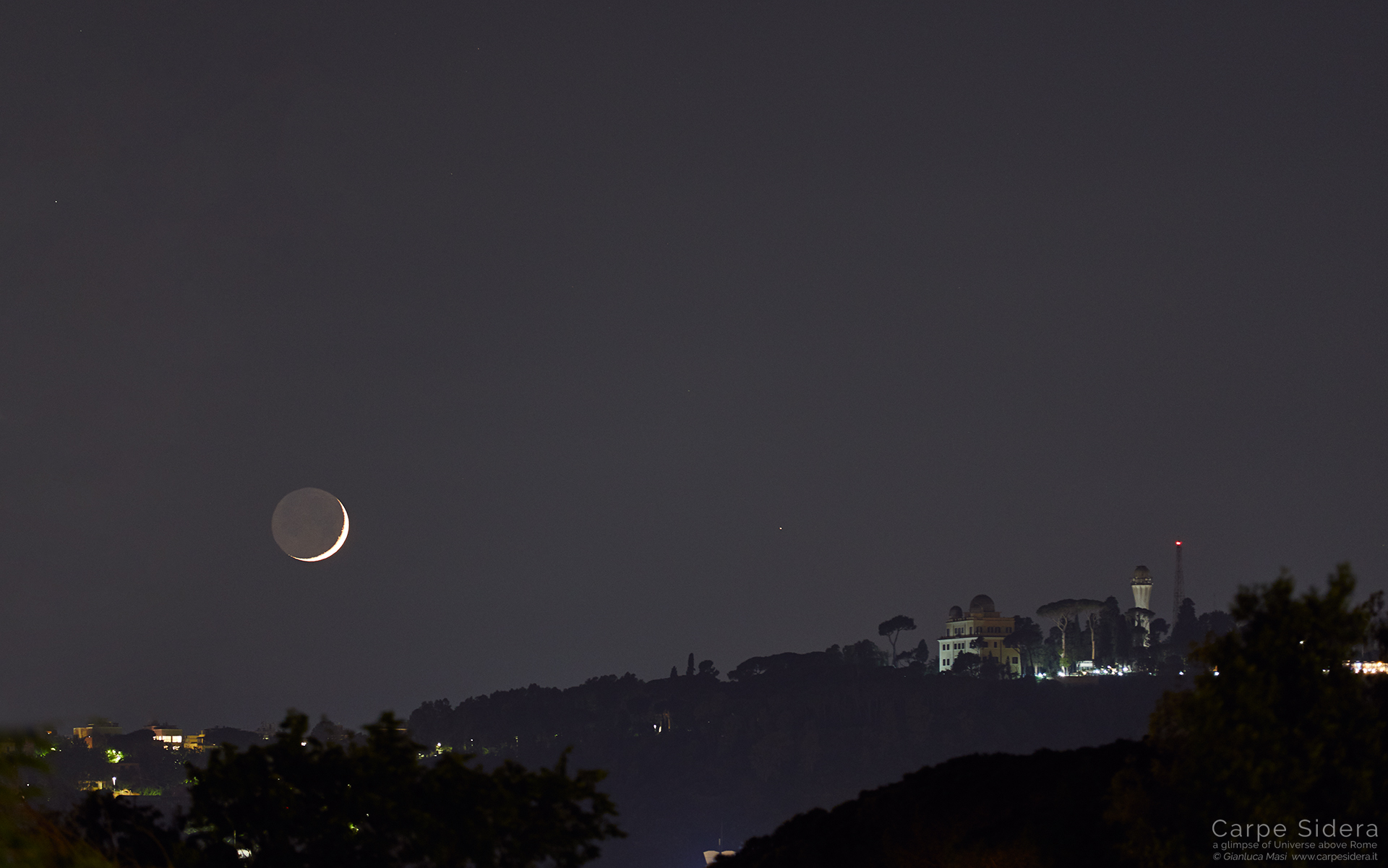 I like Mercury. The most elusive among the classical planets, it is always one of my highest priorities when it makes a nice apparition. This is the case this early June, now that Mercury is starting its evening season, offering very favorable conditions to us living in the Northern Hemisphere.

I managed to organize an imaging session, hoping to include Rome and its monuments – as I always do – this time thinking to something more astronomical. In Rome we have the important Monte Mario astronomical observatory, sitting on the top of the homonyms hill, from where it dominates the Eternal City.

Including the observatory was also a reference to times when seeing the stars from Rome was well possible, while now light pollution is such a serious issue that we see just a fistful of stars. But they are up there! This is why I support, by the way, the “Dark Skies for All” project of the International Astronomical Union, serving as an ambassador for that project, and spend a lot of time imaging/sharing the stars from Rome.

The location of the Sun at summer pushes planet Mercury (which is always just a few degrees from our star) to its northernmost position, which is a great help if you want to include the Monte Mario Observatory, placed in the northern part of Rome.

I decided to setup my imaging gear in Villa Borghese, close to the famous “Pincio” terrace, from where I could see the observatory in the right direction. Also, the young Moon was going to set in the same spot, hopefully I could have good luck with more than an subect. 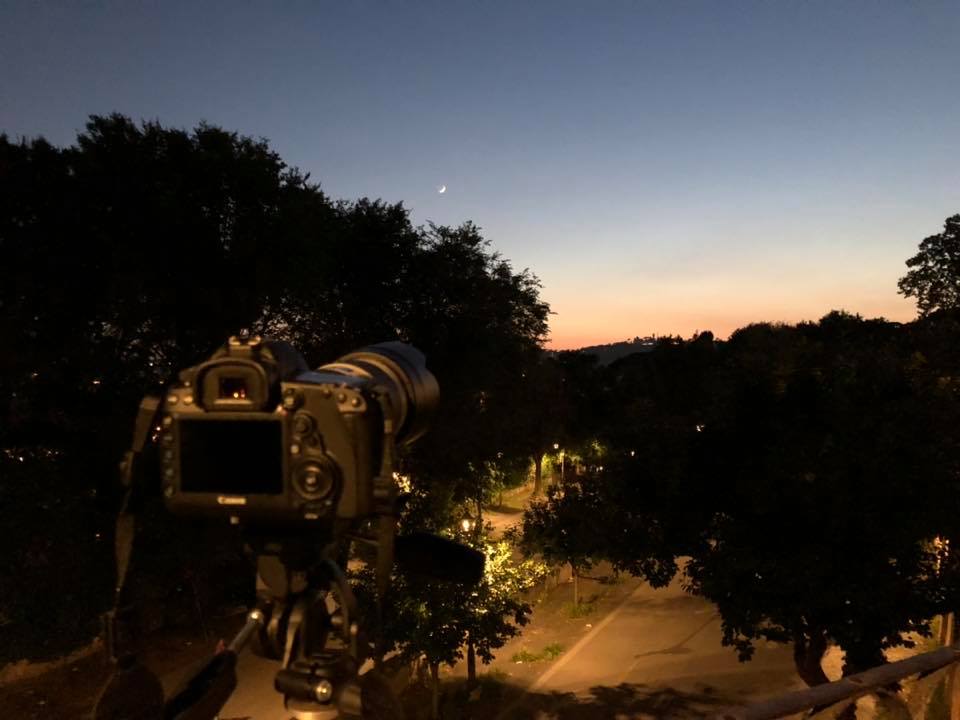 The imaging gear is ready!

I reached the place at sunset and soon the Moon appeared as a sharp crescent, ready to show its precious earthshine. But my priority was Mercury, significantly lower above the horizon and going to set quickly. I had to wait for a while before I could see it, as some clouds made the sight much harder. But knowing where to look I spotted it, then I tracked it for a while, seeing it drifting west, apparently approaching the Monte Mario observatory’s building. 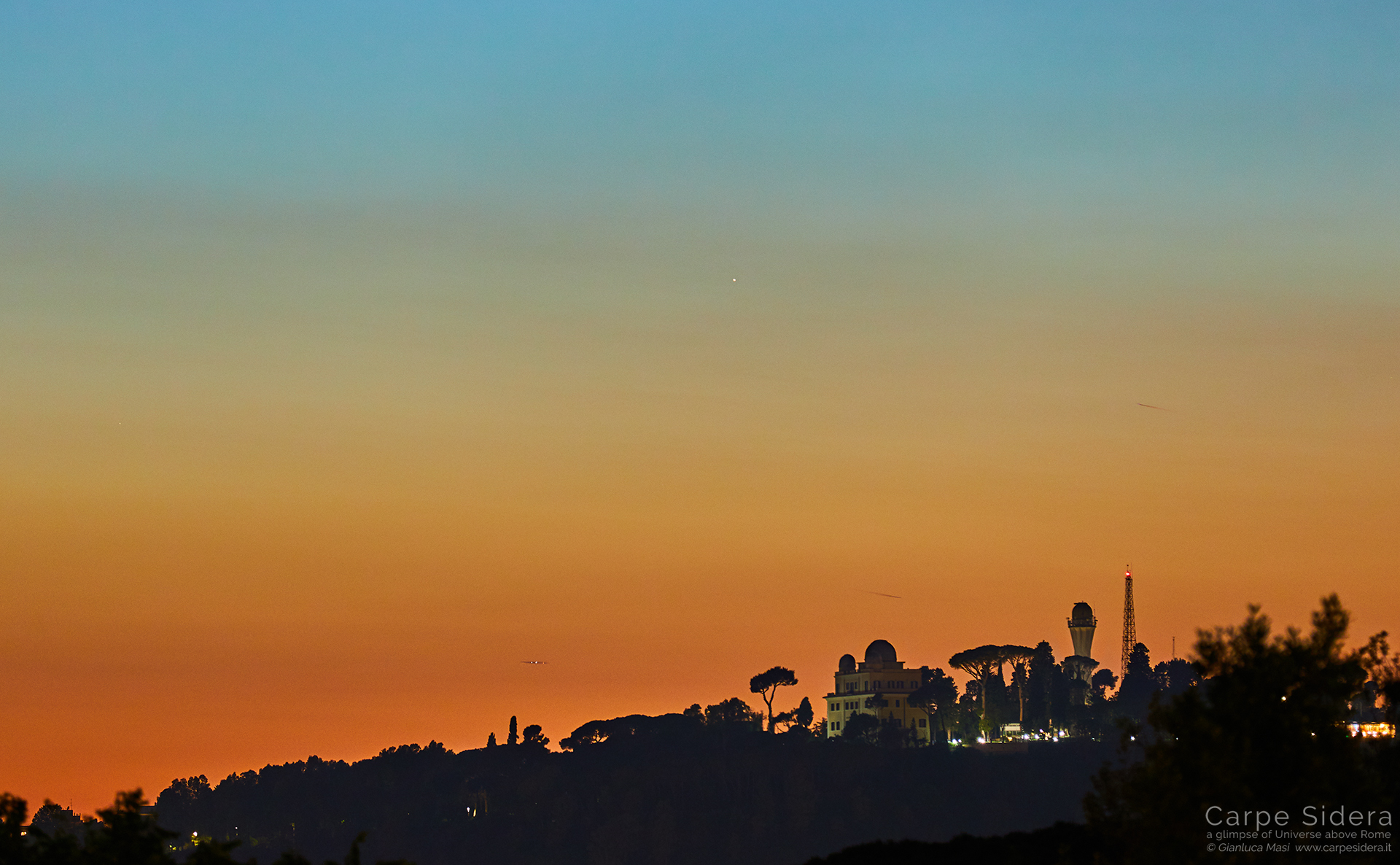 The colors were awesome, the sight so elegant that I felt so happy to have had this idea. I really loved to face that evolving scenery, with the planet finally setting behind the solar tower, the tallest building with a dome on the right.

At that point, I concentrated on the Moon, having planet Mars a couple of degrees apart. By the time Mercury was gone, the sky was significantly darker and I could easily see (and capture) the earthshine. I love that feature, I cannot express my feelings every time I see it. 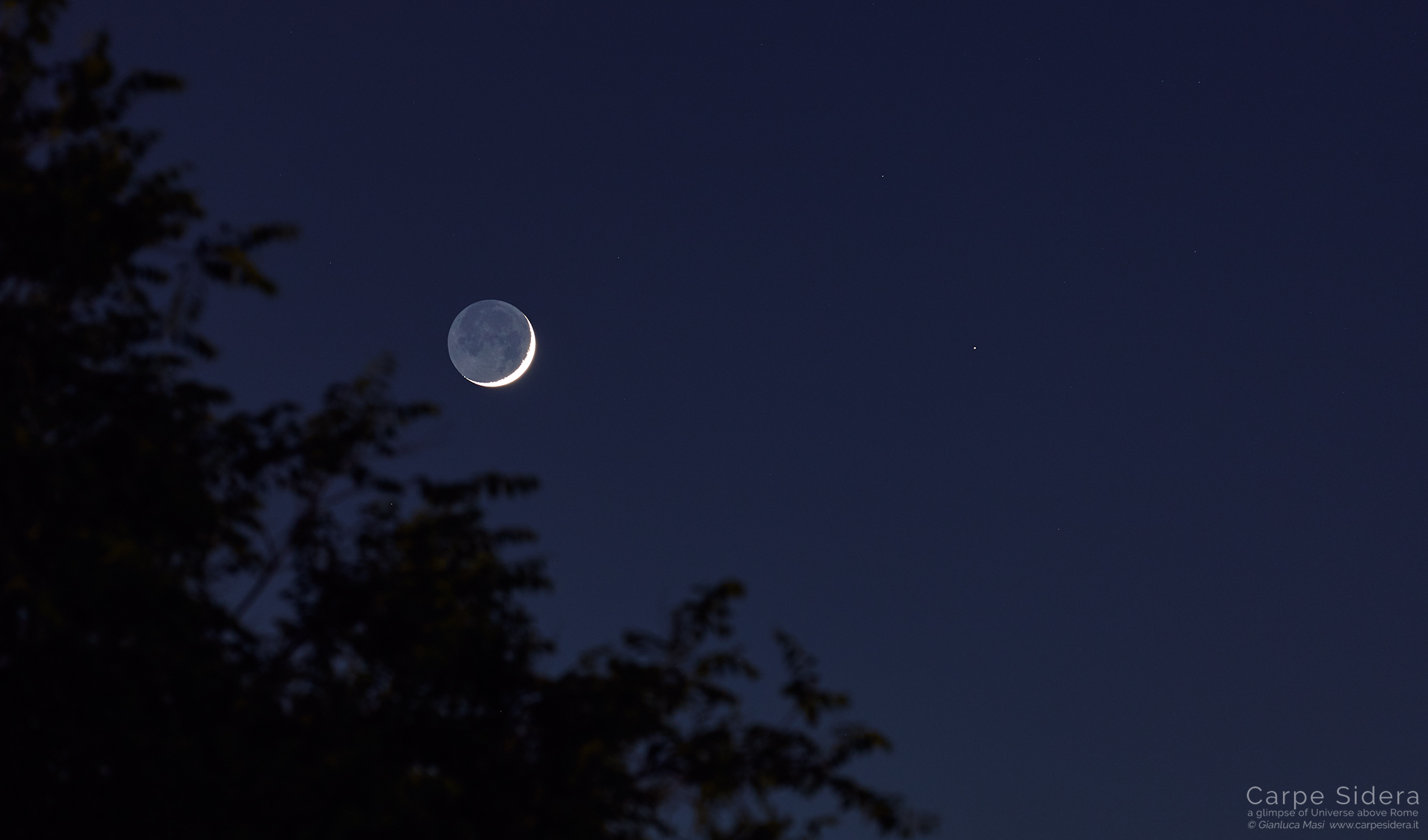 Our satellite was among the stars of the Gemini (“the Twins”) zodiacal constellations. Castor and Pollux, its brightest stars named after the Dioscuri, were an obvious sight and my camera captured most of the Gemini constellation, as you can see below. 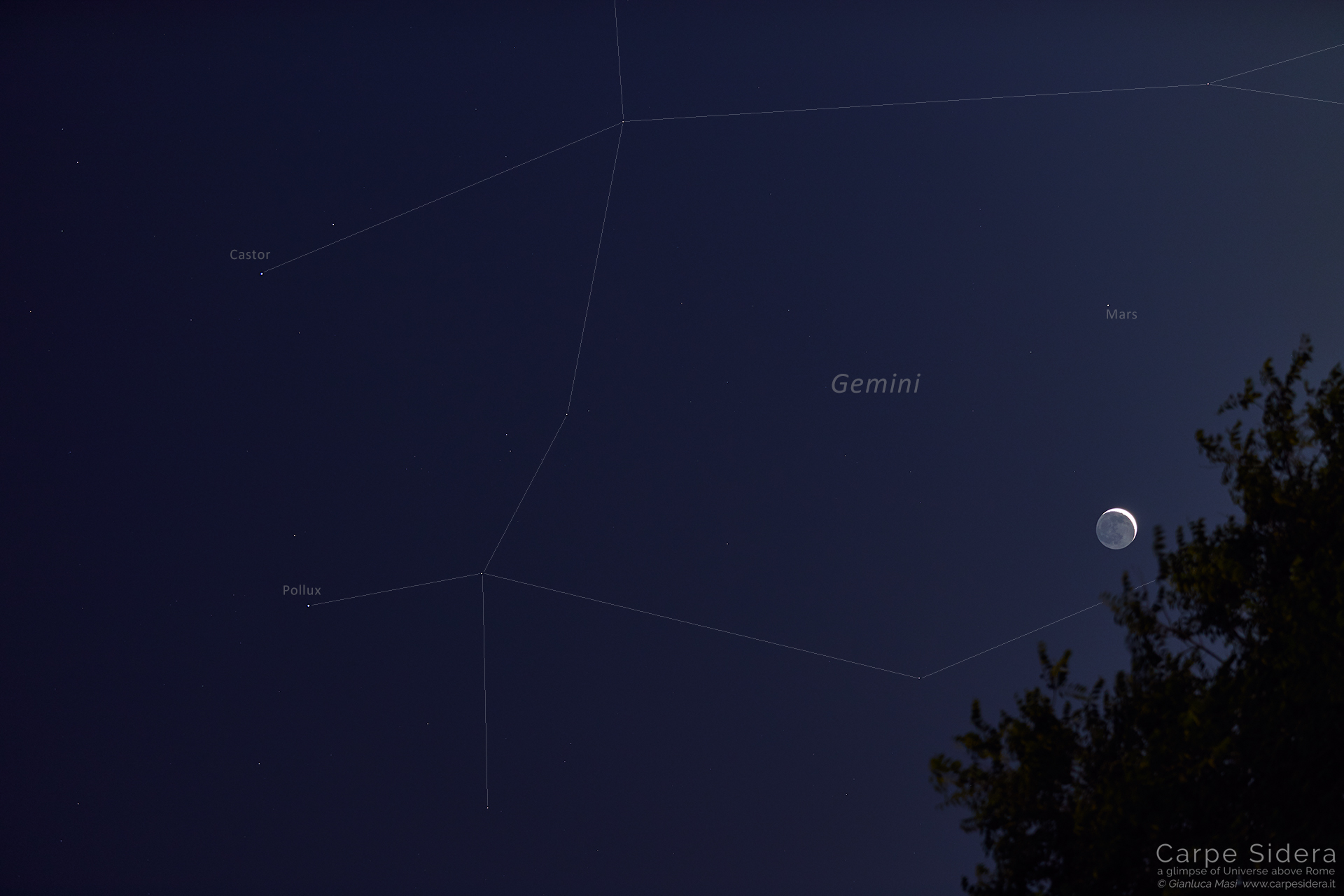 Soon (time runs so fast, always!) the Moon and Mars were showing beside Monte Mario observatory, offering a memorable opportunity to put together the astronomical symbol of Rome with the real sky. 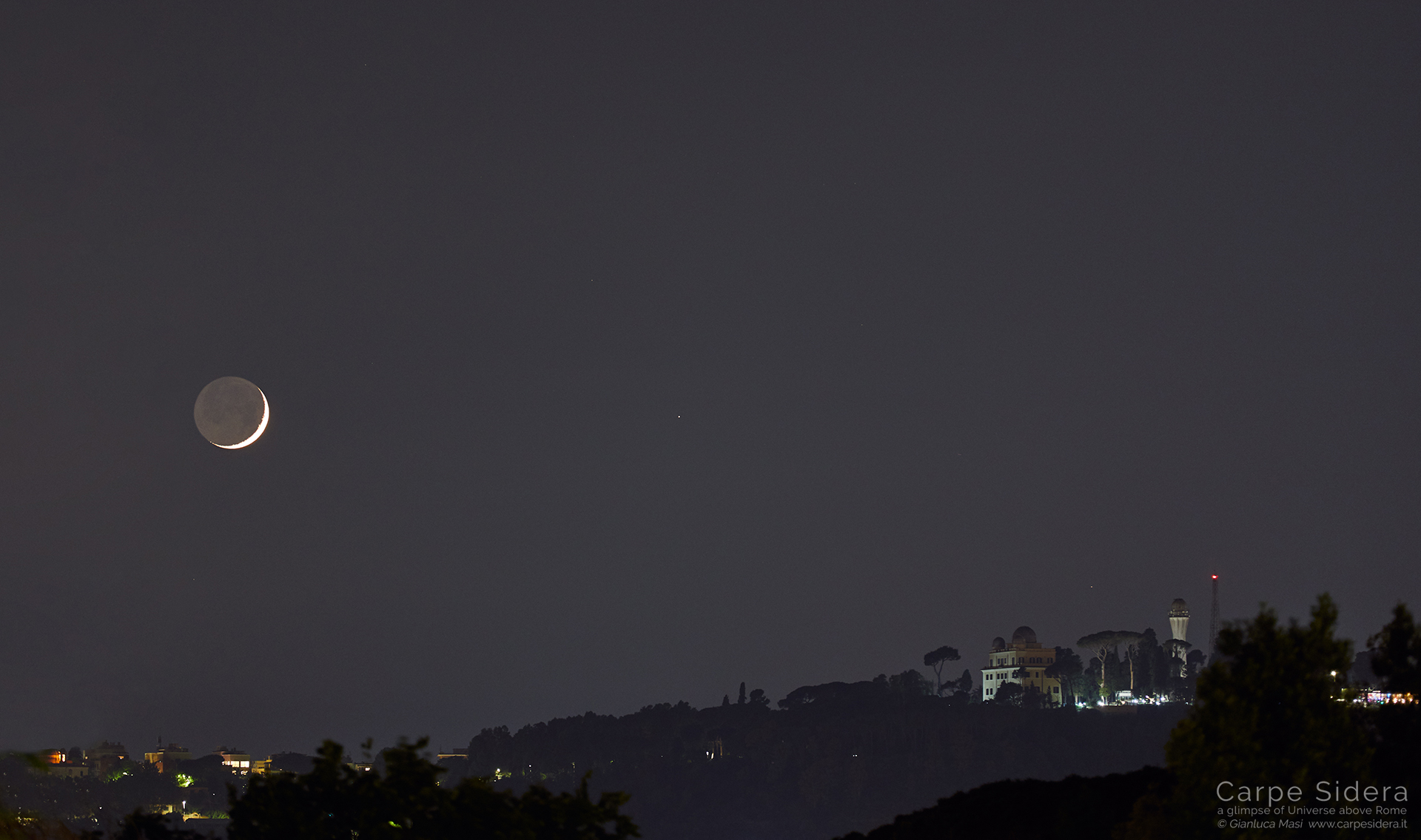 When the show was over, I had a final look, then I left the place, already thinking to the next cosmic event, so stay tuned!